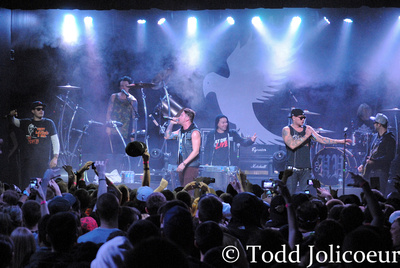 Hollywood Undead loves Detroit and Detroit loves Hollywood Undead.  This show, one of a handful on the Underground Tour, sold out and was a capacity crowd.  There was no opener and the band hit the stage at 8.15 pm.  The fans couldn't wait to hear all of those songs they love, along with a few new ones peppered in.  I think the band was even more anxious.  The introduction roared through the PA and as soon as the lights started coming up ,the band filed onto the stage ready to make the night theirs.  From the opening notes of "Undead" to the set closer and lead single from the new disc "We Are" the crowd was into every song.  The set list was a culmination of their three releases to date, with a good mix from each disc.  The new disc, Notes From The Underground was well represented by "Dead Bite," "One More Bottle," "Another Way Out," and "We Are."  The rest of the set was a pretty even mixture of songs from their debut, 'Swan Songs' and their last disc, 'American Tragedy.'  Everyone in the band took their turn at leading the crowd and showing the love, with a personal favorite when Danny came out with an acoustic and played with Charlie and J-Dog on "Bullet."  Personally, this is the most overlooked song in the bands catalog.  The show featured the new masks from the band, which they discarded after the third song. These guys make no apologies for the show they put on, the attitude and swagger they display on stage, or the way they interact with their crowd.  It is part of the relationship they have built with their fan base.  There is plenty of banter between band members and the crowd between songs.  The trust and love between the band and this crowd is shown when Funny Man walks to the edge of the stage and heads out to surf the crowd.  The band was tight and energetic the whole show.  This was exactly what this sold out Detroit crowd needed on this cold January evening. 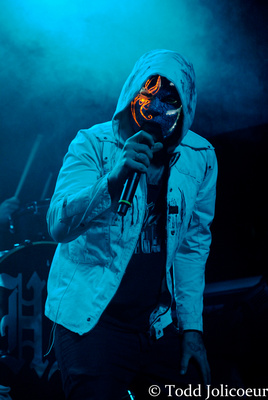 Setlist: Undead - Tendencies - Been To Hell - Dead Bite - One More Bottle - California - City - Comin' In Hot - My Town - Bullet - Sell Your Soul - Paradise Lost - Another Way Out - Mother Murder - Young - Hear Me Now - Everywhere I Go - We Are