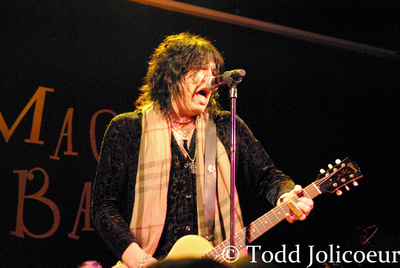 When a lead singer announces a solo album and tour, you often don't know what you are going to get.  With Tom Keifer of Cinderella, you know exactly what you are going to get.  He has been talking about a solo album for years and has talked about his country and blues roots forever.  Finally in April 2013, that album, 'The Way Life Goes,' will see the light of day.  With two singles released to radio in advance of the discs release, Tom decided to take the show out and road test the new tracks, as well as some different versions of Cinderella tracks.  "Sick For The Cure" from 'Heartbreak Station' to opened the set and it was rocking.  Tom then rolled into new single "Ain't That A Bitch" which has all the balls and blues rock feel of any hit from his past.  Another new track, "A Different Light," followed that and Tom was giving the crowd what they came for.  Say what you will, the man still rocks and rolls.  His voice is strong and I was instantly carried back to the late 1980's and eearly 1990's for the Cinderella tracks, but hearing that familiar voice on the new songs made them instant classics.  Slowing the pace and breaking down the songs with acoustic guitars and back stories made the next few tracks feel like you were sitting with Tom around a campfire or in his living room getting the inside scoop and special performance.  It was interesting to hear "Shake Me" done acoustically, but made me appreciate the song that much more.  Getting to hear more new tracks made the wait for the new disc that much harder, especially after hearing great songs like "Solid Ground" and "Cold Day In Hell."  Closing the main part of the set with three Cinderella tracks left the crowd anxious for more, and Tom delivered.  His encore consisted of a very cool and personalized rendition of "With A Little  Help From My Friends" and the Cinderella classic, "Gypsy Road."  If this tour gets extended and travels your way, you would be remiss to not venture out and see this show.  Tom still has the goods and delivered live.  I can't wait for the disc and to hear what else Mr. Keifer has up his sleeves.  When he left that stage, you knew he played his heart out and his ass off.

Setlist: Sick For The Cure - Ain't That A Bitch - A Different Light - Shake Me - Ask Me Yesterday - The Flower Song - One For Rock And Roll - Solid Ground - Cold Day In Hell - Don't Know What You Got (Til It's Gone) - Coming Home - Shelter Me - Little Help From My Friends - Gypsy Road