The annual pilgrimage of metal made its way through Detroit once again.  The Rockstar Energy Drink Mayhem Festival brought along three stages full of killer metal sure to please fans of all genres.  The main stage presented the stylings of Amon Amarth, Mastadon, Five Finger Death Punch, and Rob Zombie.  One of the biggest changes this year was the limiting of photographers on the main stage, so while the bands were great, it seemed from a coverage standpoint, there was less enthusiasm than in years past for this reviewer.

Rob Zombie brought all of his toys and his A game.  The band was on fire as they rolled through a killer set list that included songs off of his latest disc, Venomous Rat Regeneration Vendor.  I was able to interview drummer Ginger Fish and gain a little insight to the tour, the disc, and other things related to Ginger.

Five Finger Death Punch was out on this massive tour getting the word out about their latest disc, The Wrong Side of Heaven and the Righteous Side of Hell, Volume 1.  Ivan and the crew really took everything up a notch and tore the doors of the hinges with an energy that couldn't be beat.  The songs were crisp and loud, the playing phenomenal, and the crowd couldn't get enough of it.  Bassist Chris Kael shared quite a bit with us about the new disc, his new line of basses, and the inner workings of the band during our interview.

Setlist: Under and Over It - Burn It Down - Hard to See - Bad Company - White Knuckles - Drum Solo - Lift Me Up - Coming Down - The Bleeding

The Wrong Side of Heaven and the Righteous Side of Hell, Volume 1 Review

Due to interviews and various band set times, not every band was covered, but it was certainly a pleasure to see the bands I saw and even more so to speak again with some of the bands from the side stages.

Machine Head put on a great show, but my review/photo time was cut short due to a scheduled interview.  The guys hit the stage and didn't let up with a crowd ready to rock Machine Head style.

Photos from the Machine Head set 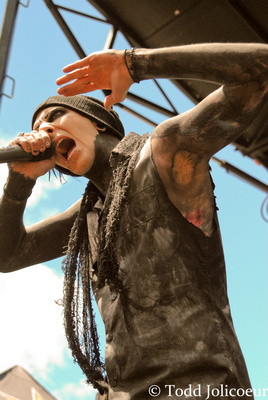 Motionless In White hit the stage and the crowd wasn't sure what to expect from guys who looked like hardcore metal rockers.  Once the music started, there was no denying these guys belong on this tour and were there to deliver quality rock and roll to the masses.

Photos from the Motionless In White set 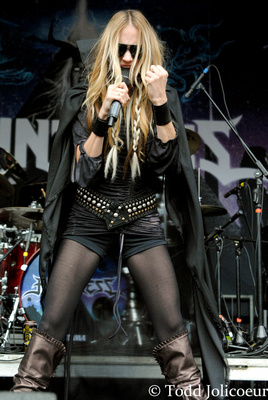 My personal favorite of the day was the opening band on the Jagermeister stage.  Huntress came out and wowed the crowd with a short set full of straight ahead rock that demonstrated what the band has to offer.  They featured a couple tracks from their latest disc, Starbound Beast.  The voice and stage presence of Jill Janus along with the rest of the band made this set a killer opening for the day.  I was able to sit down with Jill and lead guitarist Blake for a great interview that added a little depth to the quality of their show and how hungry they really are to succeed in this music industry.

Setlist: Spell Eater - Destroy Your Life - Zenith - I Want To Fuck You To Death - Eight of Swords

Photos from the Huntress set