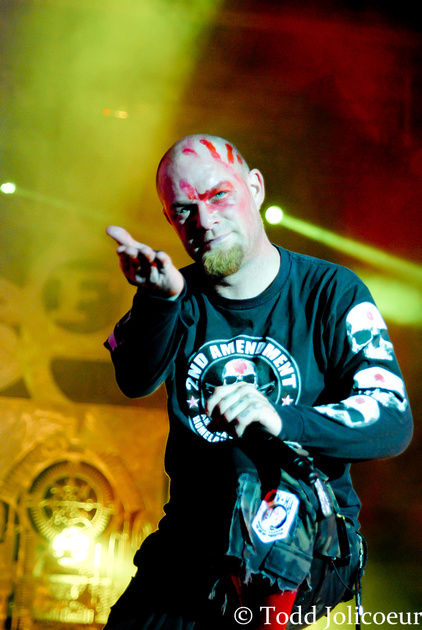 It's not often a co-headlining tour features two bands that are as similar as they are diverse, but that can be said of current tourmates Five Finger Death Punch and Volbeat.  After an energetic set from Volbeat, Five Finger has their work cut out for them.  From the first note until the last, they rise to the challenge and deliver a killer set filled with hits the fans came to hear.  The ever charismatic Ivan Moody led the charge, belting out lyric and lyric with conviction and energy that could not be contained.  The twin guitar attack of co-founder Zoltan Bathory and Jason Hook gave the crowd every riff, ping, and squeal they needed to get through the night.  The rhythm section was more than amply anchored by the other co-founder, drummer, and recent NYT best selling author Jeremy Spencer and bassist extraordinaire Chris Kael.  The songs sounded exactly as they do on the record, with the exception of the live aggression and power the band injected into their performance.  The inclusion of tracks from the bands two recent releases, The Wrong Side Of Heaven and The Righteous Side Of Hell, Volumes 1 and 2, alongside classics from their catalog gave the crowd a great blend of 5FDP past and present, with leanings toward the future.  The dedication of "Bad Company" to soldiers around the world, in addition to the recognition of us in the audience was special and powerful.  Giving a nod to metal's future, Ivan was sure to bring younger audience members onto the stage at one point was a lighter moment that soon shifted as the band tore into "Burn MF."  This track had a ferociousness to it that the CD cannot convey.  The evening and set came to a close in typical Five Finger fashion with "The Bleeding," a fitting farewell to the metro Detroit crowd. 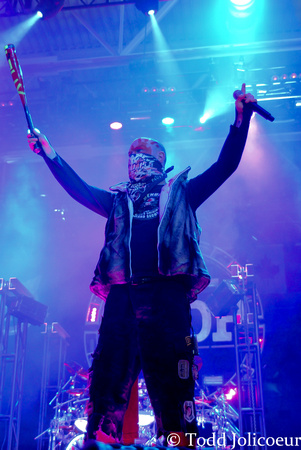 Setlist: Under And Over It - Burn It Down - Hard To See - Lift Me Up - Bad Company - Burn MF - Remember Everything - Battle Born - Coming Down - Never Enough - Far From Home - The Way Of The Fist - The Bleeding 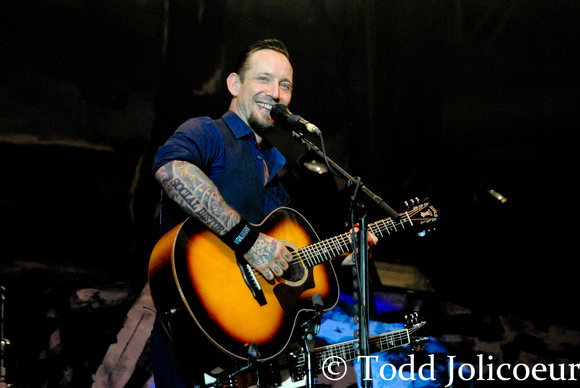 Denmark rockers Volbeat took to the stage first, not to warm up the crowd, but to demonstrate exactly what they had to offer.  These guys tore through a setlist that gave fans new and old a glimpse into the bands catalog and influences.  The vocals and guitar playing of frontman Michael Poulsen were in top form.  After slimming way down, his voice seemed stronger and his energy was in abundance.  Also tipping his hat top the younger rockers in the crowd, he grabbed a Volbeat shirt and crowd surfed his way to a youngster attending the show with his father.  Bassist Anders Kjolholm and drummer Jon Larsen gave every song a heavy back beat and timely tempo.  The newest addition Rob Caggiano more than handled guitar duties and seemed to feed off of the crowd as much as they fed off of him.  One of the high points in the show was when the band broke into recent Gold single "A Warriors Call."  The hands in the air, the heads banging away, and all the voices filling the arena demonstrated the strength of modern rock radio.  Playing 15 tracks and leaving everything they had on the stage, I would be willing to bet these guys picked up a fan or two during the course of their time on stage. 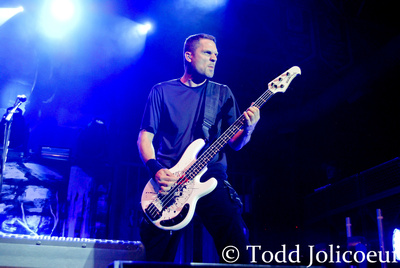