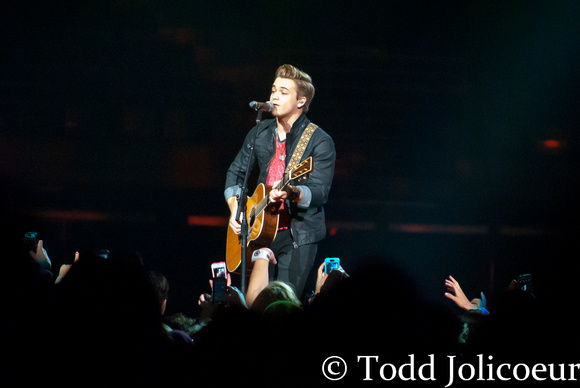 Hunter Hayes' Tattoo [Your Name] Tour landed in Detroit this past Saturday night at The Palace of Auburn Hills.  From the moment the doors opened until the last note was played by Hayes and his band, there was a buzz in the air... an electrical charge that only his music and presence would tame.  His fans came out in droves to hear the songs they love and to see this young man do what he does best - entertain his audience.  Before the show, there were messages on the various screens supporting Hunter's various missions, one being the USO - for which he was giving away a special bracelet to help raise awareness.  As a veteran myself, I was pleased to see someone taking an interest in this cause.  Little did I know how cool this would eventually be.  As the house lights went down, the crowd jumped to its feet and patiently awaited the arrival of the man of the hour.  The stage lights came up, the crowd went wild, and Hunter came out, guitar in hand.  As the lights cycled from red to white to blue and back again throughout the show, the special bracelets also lit up in corresponding colors.  The vision of so many bracelets throughout the crowd and arena was a cool sight to behold - and it took the show interactive, allowing his fans to be a part of the shows production.  As Hunter and his band moved through the first few songs, it was evident that this guy is the real deal.  His vocals were as clean as they are on his different releases and remained strong throughout his set.  Another facet of his performance that really impressed a lot of people in the crowd was his guitar playing.  This kid can shred.  I am not talking basic stuff here - one of the earlier tracks in the setlist turned into a great jam allowing him to interact with the crowd, moving from one walkout ramp to the other, all the while playing some killer guitar licks and riffs.  This guitar work would reappear several times throughout the show.  Relying on his vocals and guitar work for the majority of the show, Hunter elicited screams, sighs, and all out pandemonium whenever he would flash that big smile of his, whether during a song or when addressing the crowd between tracks.  From first note to last, there was no doubt why Hayes has been honored with Grammy nominations.  Mixing tracks from both his 2011 self-titled debut and his smash release, Storyline, from earlier this year, Hayes and his band brought their "A" game tonight and left just about everything on the stage they had to give.  If you get a chance to scoop up some tickets for any of the remaining dates on this explosive tour, do yourself a favor and don't wait - you just might miss out on one of the best shows of the year.