Having released one of the strongest metal albums of the year, Judas Priest decided to take the madness on the road.  From the moment the spotlights illuminated the Judas Priest banner hanging in front of the stage and shadows of the various members could be seen, the Detroit crowd began to buzz with overwhelming anticipation.  The lights went out and the first notes of "Dragonaut" began to chime through the venue and take the audience by the throat.  Guitarists Glenn Tipton and Richie Faulkner took to the stage and began what would be an ongoing twin-axe attack that saw the pair trading off on classic and fresh Priest riffs.  One of the heaviest rhythm sections around - drummer Scott Travis and bassist Ian Hill - accompanied the axe slingers on a heavy metal journey that included several tracks from the bands latest release, Redeemer Of Souls, as well as classic tracks and fan favorites.  The nights festivities kicked off full force when that familiar voice rang through the speakers and monitors, filling Detroit's Fox Theater with the sounds of Metal God Rob Halford.  The mix was perfect and the band was on fire from the moment they launched the evening with "Dragonaut" and "Metal Gods" until they closed the show with their seconds encore of "Living After Midnight" and "Defenders Of The Faith."  Hearing this lineup tear through classics like "Breaking The Law" and "Hell Bent For Leather" restored the faith of thousands of Priest fans tonight.  The band put a modern stamp on classics from a lot of their catalog as well as strong arming the four new tracks featured.  Only one question remained among fans filing out after the electric show as the song "Beginning Of The End" played.  Was this the beginning of the end for Priest or just the end of a new beginning?  We will have to wait and see, but at least we have tonight to carry us through. 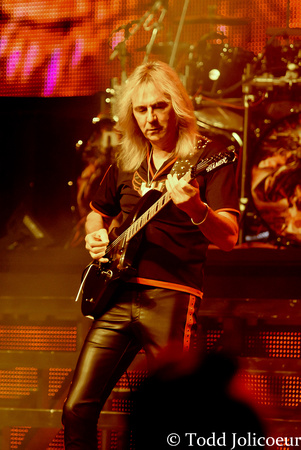 Setlist: Dragonaut - Metal Gods - Devil's Child - Victim Of Changes - Halls Of Valhalla - Love Bites - March Of The Damned - Turbo Lover - Redeemer Of Souls - Beyond The Realms Of Death - Jawbreaker - Breaking The Law - Hell Bent For Leather - You've Got Another Thing Comin' - Living After Midnight - Defenders Of The Faith