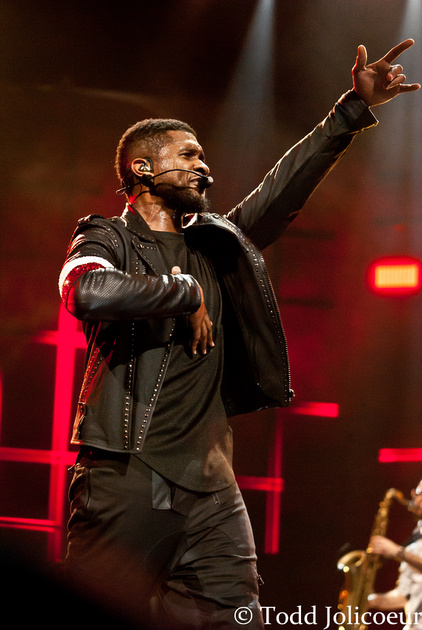 What do you do when you coach the winning contestant on The Voice?  Disney World maybe?  If you are Usher - who coached Josh Kaufman  to victory earlier this year - you finalize new material, put together a setlist, pull a band together, and choreograph a phenomenal live show.  Unfortunately the new material has been shelved for the time being, with the exception of a couple singles, but with 20 years of material available, The UR Experience is bound to please everyone that walks through the door.  Once the openers completed their sets, the stage was being set for the main event.  That is an understatement!  The lights dropped, the video screen lit up and the introduction rolled - then Usher hit the stage swinging.  He came out like a man on a mission, and the only result that would do would be an arena full of satisfied Usher fans.  Digging back through his entire catalog, with the exception of his debut release, Usher culled a setlist full of killer tracks that lend themselves to a live atmosphere, from R&B tracks to songs full of hip-hop influence and of course, sexy tracks meant to make the women in the audience swoon for the man on stage.  Make no mistake about it - Usher knows who his target audience is.  All night long he aimed for that target and scored direct hits, song after song.  Pulling three tracks each from My Way and Raymond v. Raymond, the crowd was treated to killer track from set opener "My Way" to crowd pleaser "OMG" (this one even had this guy going).  A nice surprise was the addition of the two hit singles from the unreleased new material, "She Came To Give It To You" and "Good Kisser."  If these songs are any indication, Usher is alive, well, and ready to take over the world, once again - just as he did in 2004, when he released the 10X platinum disc Confessions.  This collection yielded eight tracks plus the bonus track "Seduction" to tonight's setlist.  Closer to the end of the show, Usher decided to show some of the women in the crowd some love and had his crew bring a few of them up on stage.  Again, the man knows his audience and how to please them.  Whether it is flashing that seductive smile, showing off most of his dance moves, or pulling out tunes from other discs in his catalog, Usher came to please.  His band was in top form as were the dancers that supported him on stage.  This production is not to be missed when it rolls through your town.