The Ice Breaker Tour sponsored by 93.9 The River featured Counting Crows in the headlining spot, and the packed Fillmore Detroit audience couldn't have been happier to be sharing a Tuesday evening with the band.  After a folk-filled opening set from Twin Forks, anticipation started to fill the air and the electricity could be felt throughout the audience.  The lights went out and "Lean On Me" by Bill Withers piped through the sound system as the band readied themselves to take the stage.  Without fanfare, each member took their respective position as the lights slowly came up and the opening notes of a small jam session slowly morphed into "Round Here."  Each song took on a life of its own, as the guitar parts and frontman Adam Duritz's ad libs added depth and a personal touch to the classic set list.  Sprinkling tracks from across their catalog, the band hit each release and threw in an additional cover, "Friend Of The Devil" from The Grateful Dead.  Best represented was the bands latest disc, 2014's Somewhere Under Wonderland, which provided six songs for the evening, including "Palisades Park," "Scarecrow," and "Possibility Days," among others.  The bands 1993 debut August & Everything After was covered by five tracks including three of the singles released from the disc: "Rain King," "Round Here," and "A Murder Of One."  The three guitar attack added texture to certain tracks and depth to others, while the rhythm section kept time and anchored the bottom end of each track.  Two songs each were played from the bands discs, Recovering The Satellites, This Desert Life, and Hard Candy.  The bands covers collection, Underwater Sunshine, provided two of the three covers performed tonight - "Start Again" from Teenage Fanclub and "Hopsital" from Coby Brown.  A perfect rendition of "Come Around" was the lone contribution from 2008's Saturday Nights & Sunday Mornings.  If you haven't witnessed a Counting Crows show, you may want to see them on this tour, as they seem to be firing on all 7 cylinders - the band sounds tight, seems to be enjoying each other on the stage, and the vocals are strong.  If you have seen them before, see them again - the songs and good vibes are worth the price of admission. 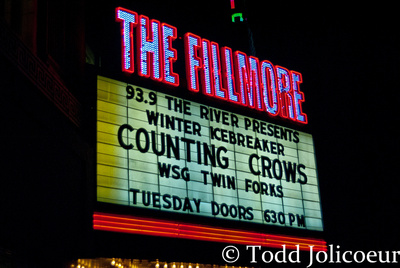