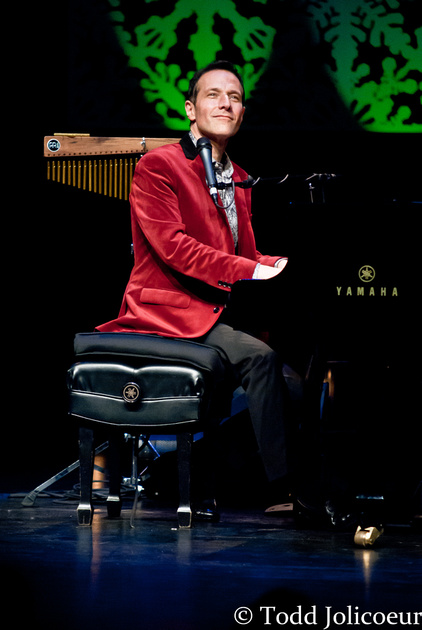 Wrapping up the holiday season can be hectic and nerve-racking, to say the least.  What better way to bring the holiday season to a close and the New Year in with a bang than to spend it with Jim Brickman and a couple of his friends.  The audience for tonight's performance filled the Michael A Guido Theater in Dearborn, MI to capacity.  They waited patiently for the moment the house lights would dim, Brickman would take his familiar position behind his Yamaha, and the air would be filled with sounds of the season and beautiful original compositions.  Opening with instrumental versions of holiday favorites, the tone for the evening was set.  After a couple songs / medleys, Jim was joined on stage by friend and Julliard educated Tracy Silverman, who wowed the crowd with his six-string electric violin, especially when he broke into various different songs, musical genres, and "riffs" during an elongated, and rocking I might add, solo during the first of two sets.  Brickman and Silverman entertained the crowd with a couple duets before welcoming vocalist John Trones to the stage.  Filling in for Anne Cochran on this tour stop, Trones didn't miss a beat and added his vocals to another selection from Jim and Tracy, before Silverman exited the stage and allowed John to lay his vocals overtop a couple of Jim's beautiful compositions.  The banter between Brickman and his friends / guests was often humorous and engaging, but none more than his telling of the self-realization that his music has truly become a thread within the fabric of all of our lives.  After playing one of his most recognizable songs, "Timeless," the composer explains how aware he has become of his songs use as a backdrop in daily life, whether shopping, using an airport restroom, or when getting certain uncomfortable medical procedures done.  If you don't know Brickman's catalog, you are missing out - he plays beautifully and writes emotion eliciting songs.  If you haven't seen him perform live - not on DVD - actually sitting in the venue witnessing his talent, you need to correct that.  I am so glad I did! 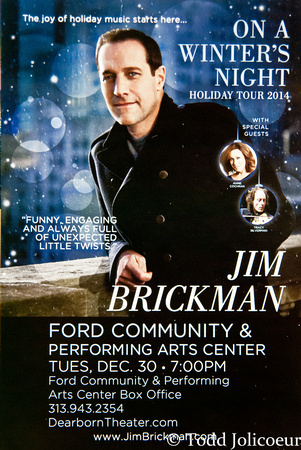