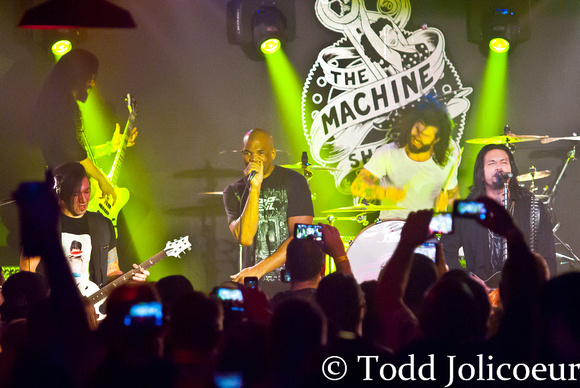 Michigan boys made good Pop Evil brought their killer live performance to The Machine Shop for two sold-out nights of mayhem.  The crowd on the second of the two nights was primed and ready to go before the guys hit the stage.  From the opening notes of "Flawed" through the collaborations with special guest DMC in the middle of the set with "It's Tricky" and a Pop Evil track, and finally to the set closer "Trenches," which also featured DMC, the band fired on all cylinders.  The twin guitar attack of Davey Grahs and Nick Fuelling gave the bands songs a chugging bite through the sound system at The Shop.  Add to that the relentless skin pounding from Chachi Riot - who hits so hard, he stands up periodically to beat on his set - and continuous thumping from bass player Matt DiRito, and you get a fun night of head-banging rock.  The last piece of the puzzle tonight is frontman Leigh Kakaty.  Mix this whole bundle of music and mayhem together and you have a full blown rock and roll party.  Leaning heavily on material from their latest release, 2013's Onyx, the band mixed in tracks from all three of their releases.  Their debut disc was represented by "Hero" and "100 In A 55."  Pulling four tracks from their sophomore effort, War Of Angels was showcased by "Last Man Standing," "Monster You Made," "Boss's Daughter," and one other song.  The set opener and closer were part of the nine tracks played tonight from the recent disc.  The crowd fed off of the energy emitted from the band as they bounced around on stage and interacted not only with the crowd, but with each other - this was a fun night for anyone lucky enough to have a ticket and stroll through the doors for this energetic show. 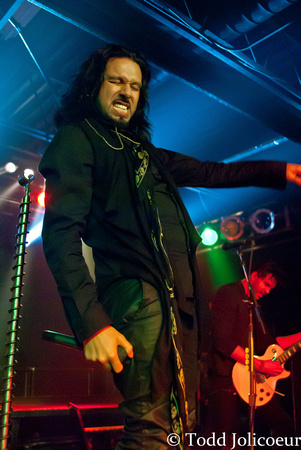