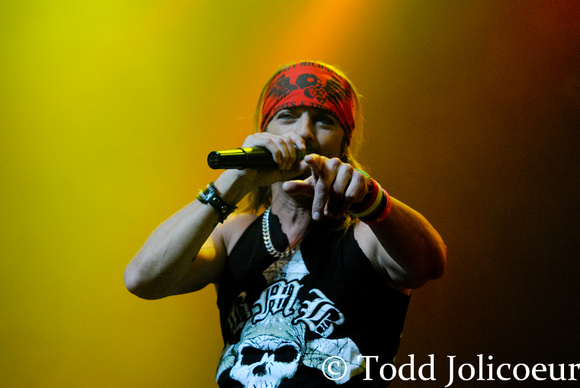 Bret Michaels will forever be known for several things: the voice behind Poison, winner of Celebrity Apprentice, spokesman for various Diabetes foundations.  Here in Detroit, he will also be remembered as one who gave back to a city that has loved him since 1986.  Recently he came to Detroit to support the Goodwills' Rock For Jobs campaign.  Not only did he throw one hell of a party at the Motor City Casino's SoundBoard theater, but he came in and toured a Goodwill store, did a little shopping, and even dug deep into his own pocket with a generous donation to the cause.  Sure, he often goes to bed to late and gets up too soon while having Nothin' But A Good Time with his friends - he doesn't typically refer to fans as fans - but he loves to give back and give it 110% when it is Something he Believes In, so to speak.  As the man and his band - the ever gracious and very cool guitarist Pete Evick, drummer Chucky, and bass player Ray - hit the stage the crowd was ready and rocked the next two hours with Poison classics and killer covers.  This wasn't about selling records or hyping a new single - this was about throwing a party in Detroit to raise funds for a great cause.  And what a party it was.  He promised to come back this summer with his other group of rockers, but tonight was about Bret, his friends, the Goodwill, and this city.  Thanks for caring Bret and for remembering the Fallen Angel that is Detroit.