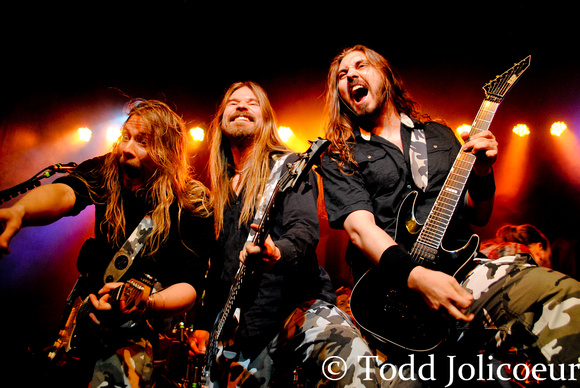 Once again, Sabaton brought their blend of rock and metal across the water from Sweden on a bill with headliner Iced Earth and opener ReVamp.  As always, these guys come prepared to rock.  The stage was set by opener ReVamp fronted by Floor Jansen.  Once the stage was converted and these metallers hit the stage, there was no mistaking the fact that they intended to take no prisoners during their time on stage.  The band went from track to track seemlessly and with little to no interaction from normally talkative frontman Joakin Broden.  He explained early on the bands time keeper and drummer had been to the ER for an illness, but that he declined to cancel a show in Detroit.  A high point during the show was when Joakim took the time to recognize the need to keep youth in metal and even gave his sunglasses to a young man in the crowd near the front of the stage.  The most noticeable thing about tonight's show was the fact that these guys were loving every minute on stage.  The smiles, the thumbs up, the overall great mood spread from the stage to the crowd and a great time was had by all.  This is the most fun I have seen a band have on stage in a long time - well done Sabaton. There were high expectations for the short set from Floor Jansen's new project, ReVamp.  This singer has excelled across the globe fronting bands like Nightwish and After Forever.  Having been a fan of the band from my first listen of their debut, I couldn't wait for then to take the stage.  The band was on fire from the first note of the opening track until the final note as the lights came up.  The bands debut was well represented by "Head Up High" and "Disdain".  The other four tracks, "Wild Card," "Limbic System," "Neurasthenia," and "Wolf And Dog" were culled from the latest release, Wild Card.  The band was tight and Floors vocals were spot on as they moved therough the thirty or so minutes they had on stage.  I can't wait until they bring this show back through Detroit and allow more rockers to be exposed properly to the band and its music.