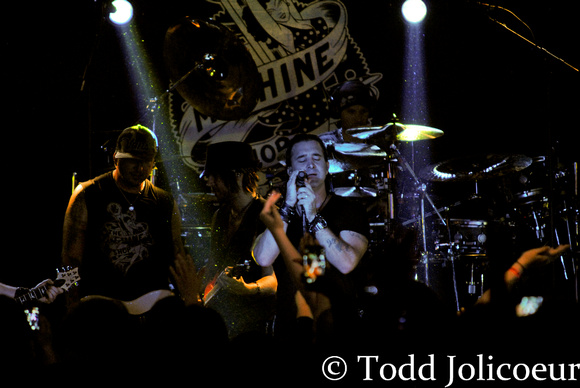 The world famous Machine Shop was packed from wall to wall and front to back for the sold out show from Scott Stapp, you know - the guy with the day job fronting Grammy winning Creed.  From the minute the opening bands Frequency 54 and Like A Storm (which was pretty good from what I heard and saw), the crowd was ready.  Opening with the lead off track and first single from his latest release, "Slow Suicide," Stapp took the crowd on a rock-filled ride that included hits from his other band and his previous solo disc.  Scott and his band, lead by drummer Chad Szeliga, put plenty of sweat and attitude behind their performance as they made their way through nine of the eleven songs on the new disc, including "Crash," "the inspiring "Jesus Was A Rockstar," and my personal favorite, "Hit Me More."  Not forgetting to tip his hat to his solo past, he cranked out "Justify" from The Great Divide.  He dug through the Creed discography as well, including songs from each release: "My Own Prison" from the debut Creed; three tracks from the diamond selling album Human Clay: "What If," "With Arms Wide open," and "Higher"; "One Last Breath' and "My Sacrifice" from Weathered and "Overcome" from 2009's Full Circle.  His voice was in top form, as was his interaction with the crowd.  He was giving this capacity crowd everything he had and they were reciprocating by singing word after word of song after song.  Closing with the title track from his latest release, "Proof Of Life" was exactly that - proof that Scott's fan base was alive and well in Flint and representing at The Machine Shop.  Catch this band in your area - it is a night full of rock, hits, and most importantly, proof that Scott Stapp the solo artist has been reborn and is ready to rock once again.

Setlist: Slow Suicide - What If - Justify - My Own Prison - New Day Coming - Overcome - Break Out - Higher - Hit Me More - One Last Breath - Only One - My Sacrifice - Jesus Was A Rockstar - Crash - With Arms Wide Open - Dying To Live - Proof Of Life