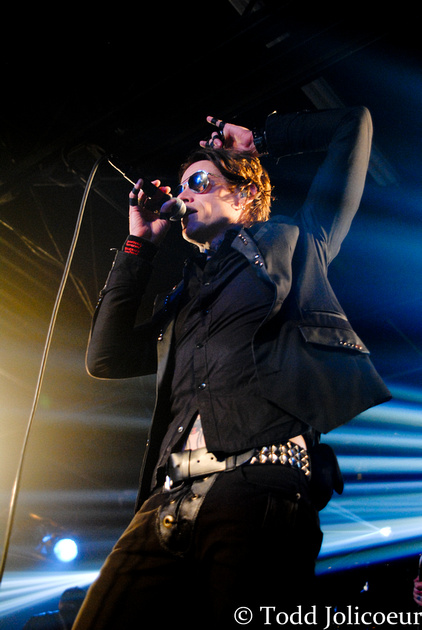 There are certain bands that I will go see anywhere, anytime.  Buckcherry happens to be one of those bands.  When they are playing Flint, MI's Machine Shop, it is a no brainer, even on a Sunday night.  I grabbed my camera and jumped in the car, blasting the latest release, Confessions, the entire 60 miles.  As usual, these guys did not disappoint.  From the minute they hit the stage and kicked off an energetic performance with arguably their best song, "Lit Up," this sold out crowd knew they were there to be rocked, and hard.  The band, Josh Todd (v), Keith Nelson (g), Stevie D (g), Xavier Muriel (d), and new comer Kelly LeMieux (b), did not disappoint from first note to last.  Mixing songs from each of their releases, the band played a setlist that was more like a greatest hits disc than a live show.  Each song kept the crowd entertained and energized.  The band's solos and introductions during the monster song "Crazy Bitch" elicited cheers, instead of the normal run for beers and bathroom.  Closing with two tracks that are sure to appear on the upcoming EP, Fuck (according to Todd all of the EP's track have to have the word fuck in them), the band ended on a high note that keep everyone engaged and interested.  The real surprise here was a cover of Icona Pop's "I Love It (Say Fuck It)."  This track was given a killer rock spin that was full of piss and vinegar, as only Buckcherry could do.  Watching Keith and Stevie trade off licks all night, along with Xavier's huge grin behind the kit, you can only enjoy the show - God knows the band is!  Hearing older tracks like "Porno Star," "Front Side," and ""For The Movies," added to the depth of the setlist and the enjoyment of the show.  Not often do I find myself sticking around until the last note is played, but tonight was one of those nights.  The stars aligned and a great rock show was had at The Shop.  The sound and lights were spectacular and added to the show.  If you haven't been to a show at The Machine Shop lately, you may want to consider it. 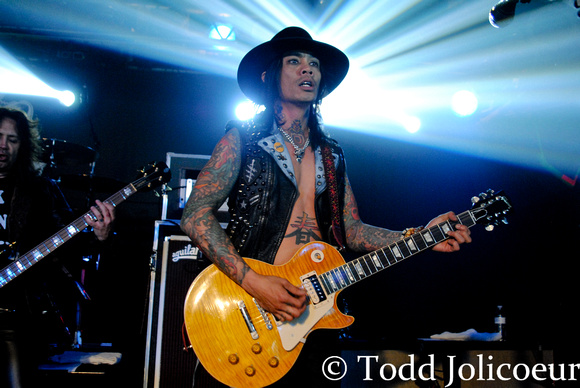