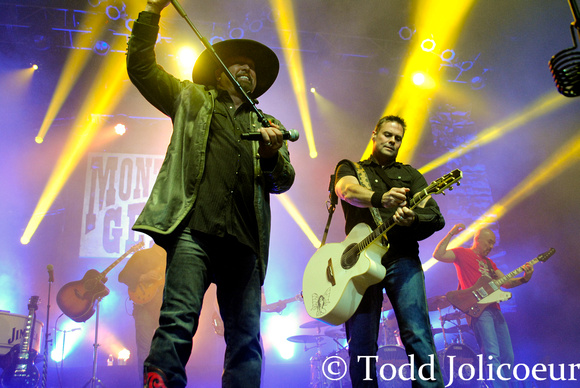 There is a buzz that takes over a crowd when songs like "Girls, Girls, Girls," "Rock And Roll All Night," or "Shook ME All Night Long" blare from the monitors.  It was no different as the crowd was warmed up while waiting for Montgomery Gentry to take over the stage at Motor City Casino's SoundBoard Theater.  The energy started to peak and then the lights went out.  Within seconds, the stage lights came up and the pair, along with their band, started what would be another great night at the venue.  As they moved through song after song, the crowd excitedly traveled with them through the setlist.  My personal favorite, "Where I Come From" was early in the set and made shooting the first couple songs exciting.  Troy Gentry was a trooper, taking the stage with guitar in hand and arm in sling.  Damned if he was going to let down this Detroit crowd.  He played, sang, and got off on the crowd as much as they did him.  Eddie Montgomery was playful and energetic as ever.  He moved from stage left to stage right, while singing his butt off for this crowd.  Throw in some air guitar played on his flexible guitar stand and the coolest pair of Jim Beam cowboy boots I have ever seen, and you have a powerful performance.  From opening note to last, each song took the crowd through the duos career and allowed everyone to walk away satisfied and happy that they heard all the songs they came to hear.  The band behind these guys was more than capable and allowed Troy and Eddie to do what they do best - rock out for a country crowd.  The stage was enhanced by a Montgomery Gentry banner and some great lighting, but these guys let their music do the talking for them tonight and trust me, the conversation tonight was phenomenal.  As always, Eddie and Troy took over and gave the fans what they wanted and needed on this Friday night inside a great venue that allowed them to play their asses off for a capacity crowd.  Don;t miss these guys when they play near you - I can guarantee I won't miss them again in "My Town." 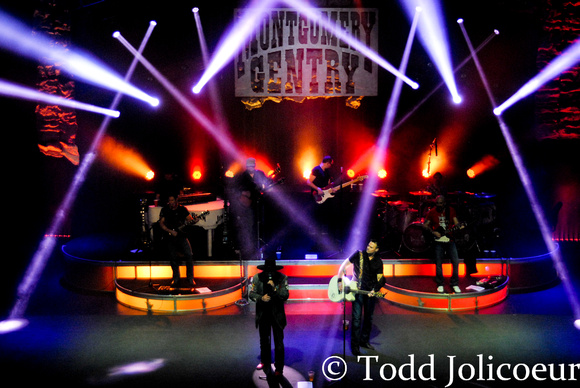