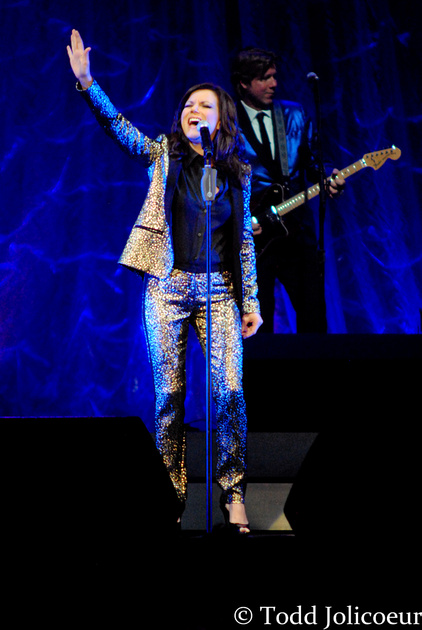 Even at a sold out show, you can typically look around and find pockets of empty seats.  This was not the case on a June Saturday evening when Martina McBride brought her Everlasting tour to The Colosseum inside Caesar's Casino in Windsor, Ontario.  A few late comers filed in as the band took their places on the stage, including the horn section that made its way from the back through the packed floor seating of the venue during the introduction.  The elegant stage was draped in blue lights that quickly morphed into a delicate blue mixed with spots and various other colors when Martina made her grand entrance.  The Elvis-like gold lame suit she wore sparkled nearly as much as her eyes when the lights caught them.  Enough descriptors - let's get to the nitty gritty of the performance.  McBride kicked the show off with a spectacular cover of "Suspicious Minds" that set the mood for things to come.  Her voice is as strong as it has ever been and her energy was not only electric, but also contagious.  Looking across the main floor, you could see fans clapping and singing along as she opened this show.  Martina's second selection was another cover, also from her latest offering, 'Everlasting,' Van Morrison's "Wild Night."  The energy of the crowd swirled through the venue and made its way to the stage, where McBride seemed to feed off of the audience and amplify that enthusiasm before wrapping it into her performance.  As strong as the first two songs were, I can only imagine how well the rest of the show went (unfortunately press was only granted access during the first two songs of tonight's performance).  With a setlist (below) featuring 14 covers - 10 of which come from her latest disc - and 12 original tracks, Martina featured some of her biggest hits mixed in with her new material.  The venue was perfect for this show, as the lighting that graced the stage and the sound system both enhanced the performance from the audience's vantage point. 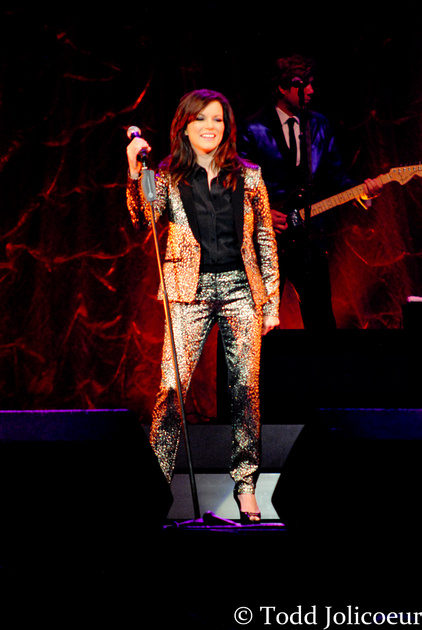 Setlist: Suspicious Minds - Wild Night - When God Fearin' Women Get The Blues - Wild Angels - Safe In The Arms Of Love - If You Don't Know Me By Now - Do Right Woman, Do Right Man - Whatcha Gonna Do -  Blessed - My Babe - Perfect - In My Daughter's Eyes - Little Bit Of Rain - Anyway - By Your Side - Come See About Me - In The Basement - Bring It On Home - Love's The Only House - Whatever You Say / Where Would You Be - A Broken Wing - What Becomes Of The Broken Hearted - Son Of A Preacher Man - Baby What You Want Me To Do - This One's For The Girls - Independence Day