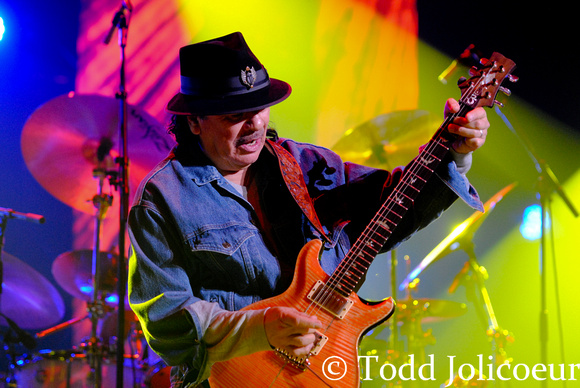 Capacity crowd is a term thrown around all the time, but when Santana brought his Corazon tour to The Colosseum inside Caesar's Casino in Windsor, Ontario, the term fell short to describe the audience tonight.  Taking the stage shortly after the posted start time, Carlos and crew wasted no time breaking right into what they do best.  The fusion-style of guitar mixed with Latin beats and rhythms took over the sound system and ignited the air with sounds of Santana.  A medley that featured "Black Magic Woman" and "While My Guitar Gently Weeps" among other songs kicked the show off and there was no letting up.  from the drummer and two additional percussionists to the bassist, extra guitarist, and keyboard player, everybody on that stage came to perform.  The horns in the back were dimly lit, but their playing shone where they couldn't.  The dual vocalists up front added some percussion of their own in addition to laying more Latin flavor on the songs with their spot on vocals.  When not concentrating on his guitar and letting his hands become one with the guitar, Carlos was all smiles, toying with members of the band when he allowed them some spotlight.  He even took a moment to play with the slew of photographers shooting the show when he requested a camera from one of them and proceeded to shoot them in the pit.  Watching this man control the stage and his band, the audience, and the entire venue of fans watching this spectacle, I finally understand the hype.  This crowd couldn't get enough, and funny enough, as they escorted us out of the venue after 15-20 minutes, they were still lined up and filing in to witness what millions have before tonight - the legend that is Carlos Santana. 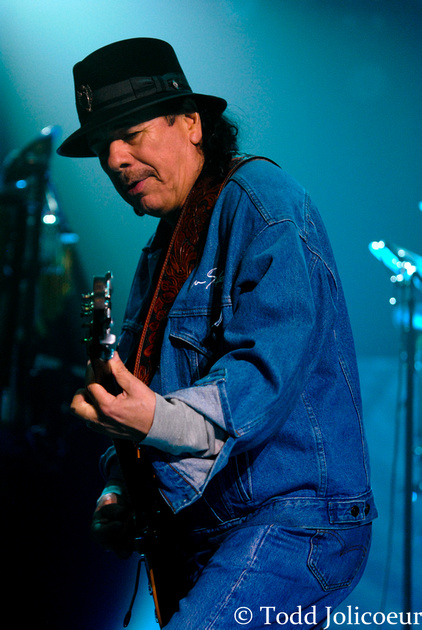