Arguably the biggest metal festival on Earth rolled through Detroit last week, as the Rockstar Energy Drink Mayhem Festival dropped its stages in the parking lot of DTE Energy Music Theatre and took over the venue.  Bands from different genres of metal took to their respective stages and made the most of their short set times.  Covering a festival with three side stages, a main stage, and a media area that is no where near the location most of the action is always a bit difficult, especially when you are looking to cover as much as possible.  There were a few bands on my "must cover" list - Body Count, Ill Nino, and Mushroomhead topped the list (as we were relegated to side stage coverage).  In addition to a few interviews we were able to conduct (links to follow), an added bonus reared its head later in the evening - truly a once in a lifetime moment. 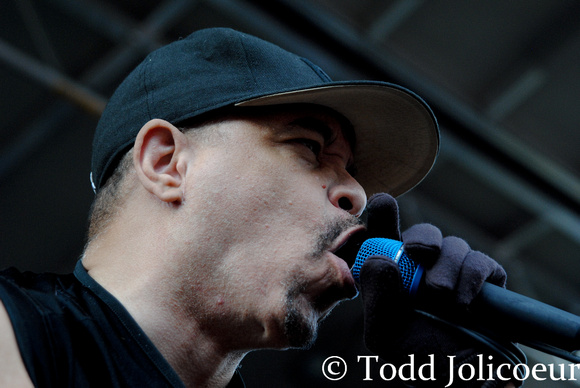 Body Count took to the Sumerian Stage on time and proceeded to tear the place apart.  Ice T led his band through a setlist that pulled several tracks from the bands controversial debut disc, closing the track that set it all off, "Cop Killer."  The band - guitarists Ernie C and Juan of the Dead, bassist Vincent Price, drummer Ill Will, background vocals and programmer Sean E Sean, as well as Lil Ice - was tight and played well together on old tracks, new tracks, and a cool cover of "Disorder" from The Exploited. 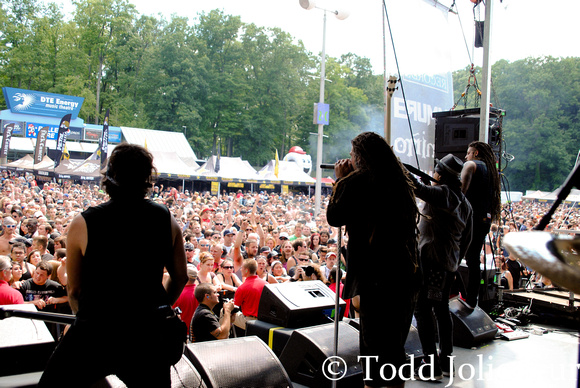 Ill Nino was another band that was on tyhe must see list - as not only are they good friends, but they have a new release that was dropping days after this show.  As the band took to the stage, the crowd was exstatic and looking forward to a little Latin metal to spice up the afternoon.  Co-founders, drummer Dave Chavarri and vocalist Cristian Machado ruled the Victory stage along with bassist Laz Pina, guitarists Ahrue Lustre and Diego Verduzco, and percussionist Oscar Santiago.  Watching these guys run through there short set was intense, but fun - they leave nothing in the tank when they leave the stage. 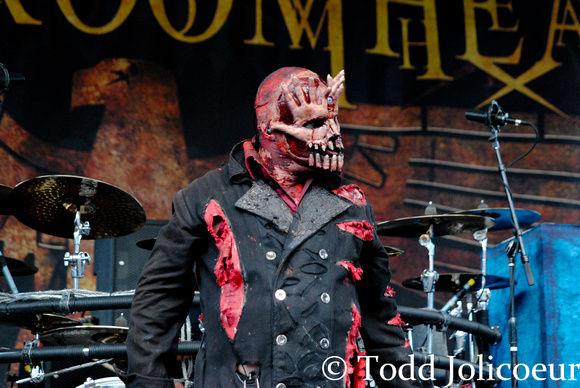 Mushroomhead is a band that puts on a killer live show and has an almost cult status with their fans.  A metal band with three vocalists is a sight to behold and a sound to reckon with.  The return of J-Mann fro this tour brought out old fans and new to the Cold Cock Whiskey Stage in the middle of the day.  Watching the mass of musicians on the stage move seamlessly together while playing is entertaining, both visually and aurally. 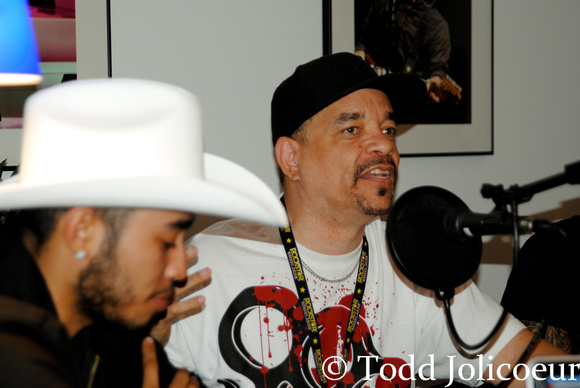 While chatting with friend Cristian Machado of Ill Nino, it was decided that Ice T requested members of Ill Nino and Upon A Burning Body to join him for the recording of his latest Final Level Podcast (#14) live from REDMF in Detroit.  The production office was converted to a makeshuift studio and Ice T, along with co-host Mick Benzo, proceeded to cover different topics such as current events, sports, movies, television, and of course the segment, "I'm Not a Hater, But I Hate Shit."  Chilling in the same room as Ice, Mick, members of Ill Nino and UABB, as well as Coco and the couples bulldogs Spartacus & Maximus was definitely one of the more unexpected moments of the day!  If you get a chance, check out the podcast HERE.

All told, this year was exciting and the renewal of metal - Body Count returned in killer form after a long absence, Ill Nino reestablished their position and stonghold in Detroit, and Mushroomhead brought three vocalists and their killer masks to the stage.