Mötley Crüe may be hanging the tour towel up after their current Final Tour, dubbed "All Bad Things Must End," but don't fret - the torch is still being carried bright and hot by Girls Girls Girls, the all-girl Mötley Crüe tribute.  Assuming the stage names and looks of the originals, lead singer Vixen Neil, guitarist Denise Mercedes, drummer Tawny Lee, and bassist Lucky Sixx, these talented musicians take to the stage and play all of the hits, and even some obscure tracks, to keep the Mötley magic alive.  Culling songs from the Crüe's catalog ranging from 1981 to 1991, the setlist leaned heavier on the older material.  Plucking six tracks from Mötley's debut, Too Fast For Love, and eight tracks from the follow up Shout At The Devil, these songs provided 2/3 of the nights set.  One of the highlights was the inclusion of "Primal Scream" from Decade of Decadence.  This is arguably one of the bands greatest tracks, and guitarist Mercedes proclaimed such from the stage after these ladies ripped through an explosive and spot on version of the killer track.  There was fun banter between the band and the crowd that seemed to intensify the energy and performance.  At one point, women were brought on stage to dance and entice, adding fun and a personal touch to the show.  The interaction between band members on stage was fun to watch, especially when Lucky would move back to Tawny's drums and the two would lock into a groove, providing a rhythm section that anchored every track.  The fret work provided by Mercedes was spot on and lacked none of the magic of the original when she ripped through solo after solo on these classic tracks.  We would be remiss to give props to Vixen, who sang every song with conviction and just enough attitude to give each track some of the same swagger that the original has.  The best part about this group of rockers is the ability and musicianship and their love for the songs of Mötley Crüe.  They could easily rest on the laurels of being a sexy cover band, but they know the songs, love the songs, and honor the legacy of the originals through their playing and stage presence.  If you love the original Mötley Crüe, do yourself a favor and check out Girls Girls Girls for an exciting show that is as close to the originals as you can get.  If you just like great rock and roll played with conviction and balls, check these guys out - they aim to please from the minute they hit the stage. 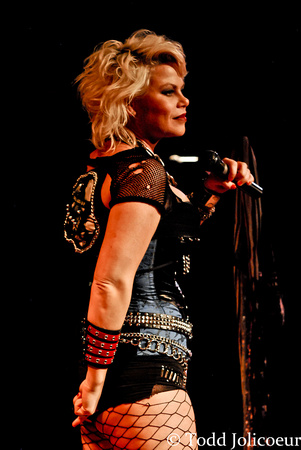