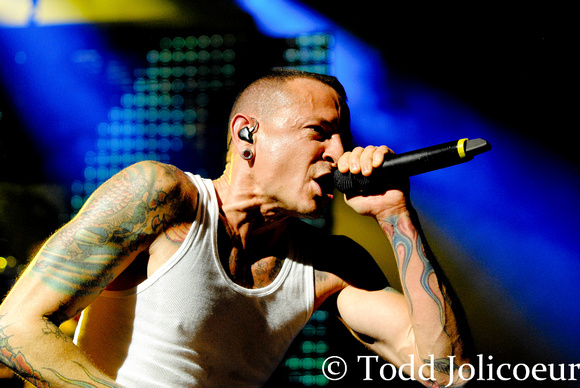 Linkin Park joined forces with Thirty Seconds To Mars and AFI for the package tour deemed Carnivores.  As headliners, Linkin Park had their work cut out for them on this bill.  They wasted no time getting into the material after a mashed up intro of different tracks from their catalog.  With a diverse selection of songs available to them, these guys ripped through 28 killer tracks from across their career, including a soundtrack song and a project track.  The bands debut release, Hybrid Theory, was well represented by six tracks, including the hits "One Step Closer" and "In The End."  Meteora was covered with the inclusion of the tracks "Faint" and "Numb." Minutes To Midnight and A Thousand Suns both featured five tracks each in the setlist.  Hearing tracks like "Robot Boy" and "Wretches And Kings" from the latter disc, added to the night, as these are lesser known tracks but add to the bands diversity and depth in a live setting.  The Living Things disc contributed three tracks to the evenings festivities.  The bands latest release, The Hunting Party, had five tracks in the lineup tonight - "Guilty All The Same," "Wasteland," "Until It's Gone," "Rebellion," and the first single and video released, "Final Masquerade."  The new songs added fun and an edge tot eh bands performance, as they seemed to embrace these tracks with the same care and love as the older, more established songs they played tonight.  The addition of "New Divide" from the Transformers soundtrack was cool, but incorporating the track "Remember The Name" from Mike Shinoda's side project Fort Minor was sheer genius and demonstrated the bands love of good music, regardless of the outlet that produced it.  If you get a chance to see Linkin Park on the Carnivores tour, or any tour for that matter, do it.  These guys bring their A-game every time... 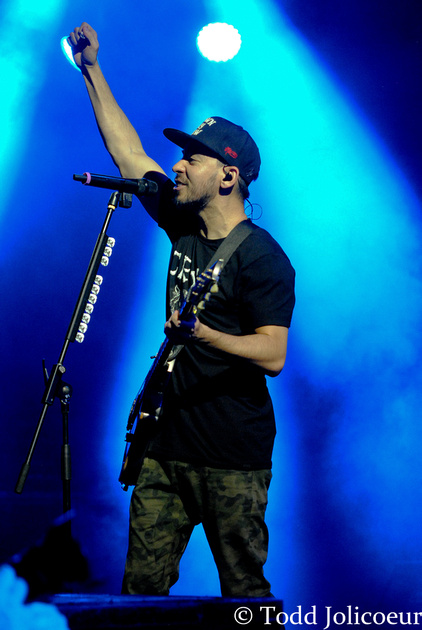 Setlist: Guilty All The Same - Given Up - Points Of Authority - One Step Closer - Blackout - Papercut - Rebellion - Runaway - Wastelands - Castle Of Glass - Leave Out All The Rest/Shadow Of The Day/Iridescent - Robot Boy - Burn It Down - Waiting For The End - Final Masquerade - Wretches And Kings / Remember the Name - Numb - In The End - Faint - Lost In The Echo - New Divide - Crawling - Until It's Gone - What I've Done - Bleed It Out