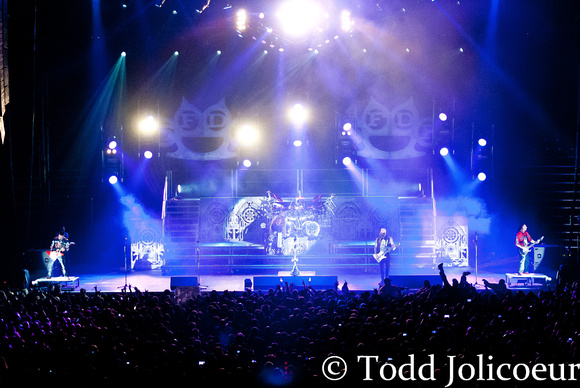 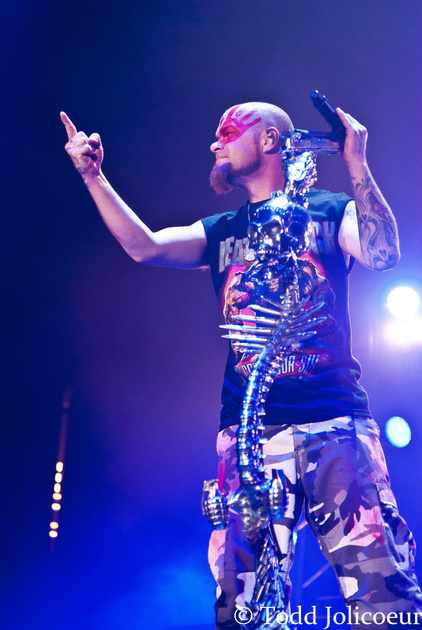 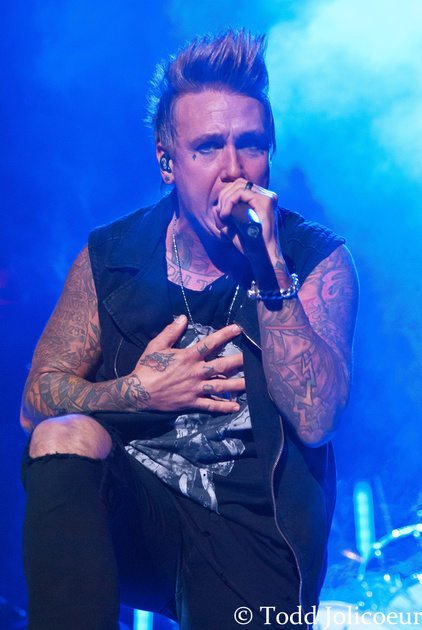 When Five Finger Death Punch and Papa Roach announced a co-headlining tour, they went to the fans and asked for help picking the routing for the tour, deciding to stray slightly from the beaten path at times, including last Saturday night's tour stop at Toledo, OH's Huntington Center.  Bringing four bands through town, including metal strongholds In This Moment and new kids From Ashes To New, this package was a hard rock fans dream come true on a chilly and drizzle filled evening.  Watching the two powerhouses come together and deliver killer sets of rock one after the other kept the hands raised, the feet tapping, the heads banging, and the pits moshing.

In This Moment delivered the best show they could with the small window of time available.  Pulling only from their last two releases - two tracks from 2012's Blood and four tracks from 2014's Black Widow - the band filled their set with props, costume changes, tons of smoke and different lighting schemes.  Frontwoman Maria Brink, along with a couple masked dancers, kept all eyes forward and center with a sexy rock show that brought crunching guitars from band co-founder Chris Howorth.  Supporting the band was the rhythm section of bassist Travis Johnson and drummer Tom Hane, as well as more guitars from Randy Weitzel.  Brinks vocals range from beauty to guttural and back, but this perfectly fits the songs and the image of the band, especially the newer tracks from the last release.

California rockers Papa Roach were next up, and heavily anticipated by the crowd in the packed Huntington Center.  As the lights went out and the foursomes outlines could be seen on the curtain, the audience went crazy and the energy didn't let up throughout the show.  The curtain dropped and away we went on a musical journey through the bands catalog that covered just about everything from their major label 2000 debut Infest to the bands latest effort, 2015's F.E.A.R. (Face Everything And Rise).  Singer Jacoby Shaddix controlled the pace of the show, as he ran from side to side, up on the monitors at the front of the stage, and smiling the whole time.  Guitarist Jerry Horton, to Shaddix's right for most of the show brought every solo to life and played the songs just as the fans had come to know and love them.  With Tobin Esperance on bass and Tony Palermo on drums controlling the tempo of the songs and setlist, the band was firing on all cylinders.  The newer tracks, including set opener "Face Everything And Rise" fit perfectly in the lineup against classics like "Getting Away With Murder" and "Last Resort."   There were two cool additions to the show that most fans didn't expect - In This Moment's Maria Brink joining the band on stage for the latest single "Gravity" and Jacoby and Jerry venturing out to the soundboard to acoustically serenade the crowd wit h"Scars" from the center of the main floor.  The bands stage setup and light show fit the mood of the set from track to track and these guys sounded as good and tight as they ever have.  Tonight, Papa Roach showed Toledo lots of love and the enthusiastic crowd loved them back. 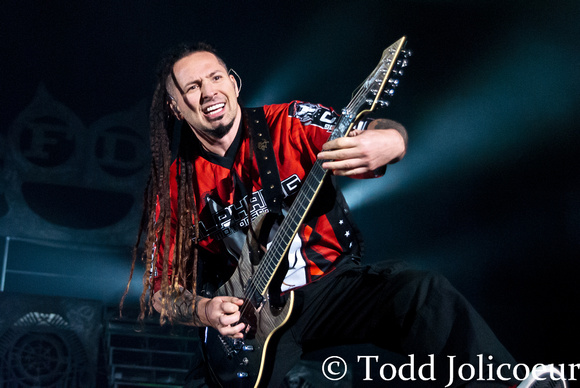 When Five Finger Death Punch rolls through town - you know it, both before hand and after the fact.  As the set changeover took place, the floor seemed to fill up and get packed in tighter than previously experienced this evening.  As the time approached for the band to hit the stage, the anticipation and electricity in the air were undeniable.  The band came out firing on all cylinders and rocking the venue from front to back.  Set opener "Lift Me Up" from 2013's The Wrong Side of Heaven and the Righteous Side of Hell, Vol 1 got everybody ramped up and ready to rock their asses off.  The band followed that with a one-two punch of older tracks ""Hard To See" (2009) and "Never Enough" (2007), before introducing the capacity crowd to the first new track of the evening, the title track "Got Your Six."  Celebrating his birthday at the Huntington Center, guitarist Jason Hook played snippets of classic rock hits before launching into the bands cover of Bad Company after a dedication to members of the Armed Forces.  Keeping perfect time from the moment the lights first went out until the house lights came up after the show, Jeremy Spencer was on fire and kept the crowd entertained with his make-up and the outfit and mask that he adorned during his killer drum solo.  Ripping into the first single from the latest release, the band kept the crowd up and moving during "Jekyll And Hyde."  Following suit as  he has done for years, singer Ivan Moody brought the next generation of rockers onto the stage and let them all head bang while the band tore through "Burn MF" before slowing the show slightly for "Wrong Side Of Heaven" and "Battle Born."  Watching guitarist Zoltan Bathory grin from ear to ear throughout the show was a true indicator of how much fun the band was having playing to and feeding off of the energetic crowd that packed the floor and rocked out from song to song.  Bassist Chris Kael helped keep the songs anchored with his heavy handed 4-string prowess and his flailing beard whipping around as he thrashed along with the fans.  As the set wound down, the band slipped into classic mode and closed the show with a couple songs from their first two releases and two tracks from my favorite, 2011's American Capitalist - "Coming Down" and the anthemic "Under And Over It."  As the final strands of "The Bleeding" crept through the sound system and it was time for everyone to leave, it was obvious that a great time was had by all tonight, regardless of whether you were onstage or in the crowd. 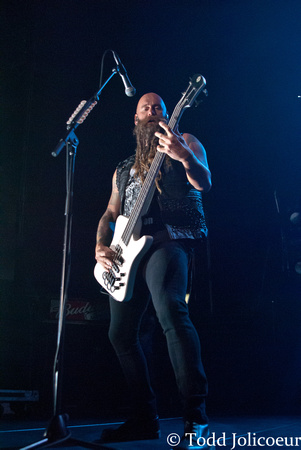 Setlist: Lift Me Up - Hard To See - Never Enough - Got Your Six - Bad Company - Jekyll And Hyde - Burn MF - Wrong Side Of Heaven - Battle Born - Coming Down - Burn It Down - Under And Over It - The Bleeding 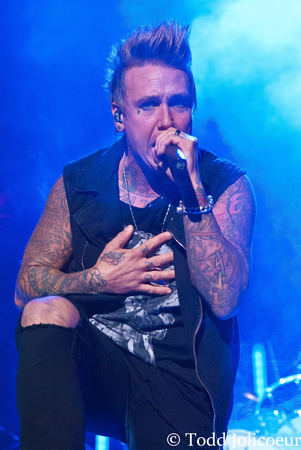 Setlist: Face Everything And Rise - Between Angels And Insects - Getting Away With Murder - Warriors - Forever - Hollywood Whore - Kick In The Teeth - Falling Apart - Blood Brothers - Broken As Me - Scars - Gravity - Where Did The Angels Go? - Still Swingin' - Last Resort - ...To Be Loved 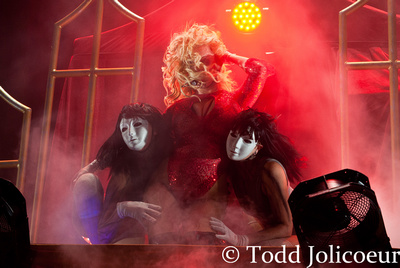 Complete set of IN THIS MOMENT show photos HERE

IN THIS MOMENT LINKS: