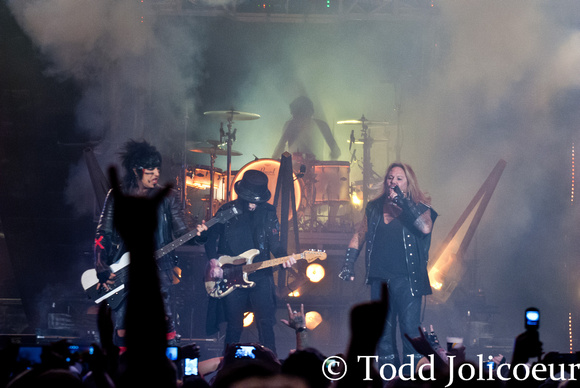 There have been a lot of Farewell Tours in rock music... but not many are deemed The Final Tour.  Mötley Crüe decided to go out with style and on top, so they came together and decided a final tour would commence and as the dates rolled by and the end loomed, Toledo, Oh's Huntington Center was fortunate enough to grab a date with the Crüe and their special guest Alice Cooper.  The packed house witnessed what may likely be the final performance from these four artists as one unit, and the crowd would not go away disappointed - as the sets from each band were packed with hits and tons of memory-filled classic rock. 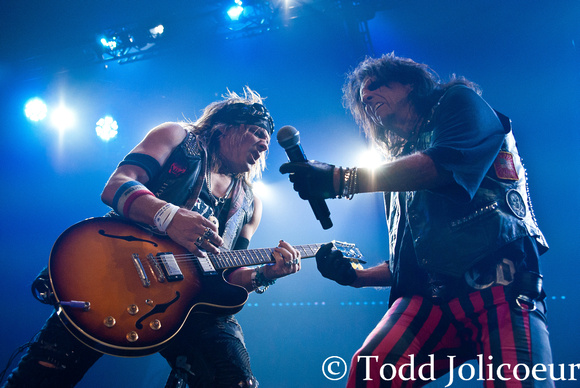 Shock rocker Alice Cooper and his band did what they do best - rock the classics, throwing in a few goodies from the late 1980's and 2000's and putting on a show that should be witnessed by every rocker at least once in a lifetime.  Getting a short set time due to the opening slot, Cooper and crew wasted no time getting to teh good stuff.  With a trio of great guitarists around him, Alice rocked the hell out of the Huntington Center crowd.  Flanked by Tommy Hendrickson, Ryan Roxie, and Nita Strauss, Cooper played his classic hits to perfection, with every solo being crisp and on target with what was expected.  Hearing classics like "No More Mr. Nice Guy" and "Go To Hell" played with this killer line-up, sandwiching other tracks like "Dirty Diamonds" and "Feed My Frankenstein" demonstrates the power of this band and the strength of Alice's catalog.  Never being one to shy away from production, there were several costume changes or additions, including swords, snakes, and straight jackets.  We must not forget the guillotine and monster-creating laboratory.  Rhythm section of bassist Chuck Garric and drummer Glen Sobel kept perfect time and tempo for the set that ran like clockwork.  Garric stepped up and also provided some killer background vocals, with his voice showcased as the monster during "Feed My Frankenstein."  Other classics like Billion Dollar Babies and Under My Wheels sounded as fresh and new as Poison, even though these tracks are almost three decades or more older.  We cannot forget the perfect addition of the real Mrs. Cooper as the nurse during the trio of classics, "Ballad Of Dwight Fry," "Killer," and ""I Love The Dead."  Lucky for us, Alice has not declared "Schools Out" and he will continue to tour even after the Crüe has called it a day.

Mötley Crüe doesn't do much half-assed, and that includes tonight's performance at Huntington Center.  The band treated their Toledo, OH fans to a killer show, while traveling down the road and towards the Sunset... Sunset Strip that is.  From the "So Long Farewell" opening borrowed from the Von Trapp's to Sinatra's classic "My Way" ending, the quartet took the enthusiastic crowd on a 34-year journey through their catalog, and then some.  Opening with arguably one of their biggest hits, "Girls, Girls, Girls," you have to wonder how the night will progress.  As Vince Neil delivered the lyrics and vocals we have all come to know and love, the band follows that track with another favorite from their Girls, Girls, Girls album, when they break into the anthemic track "Wildside."  Keeping the energy up, "Primal Scream" keeps things rolling before the bands shifts gears and heads into more mainstream territory with a couple tracks from Dr. Feelgood, when they showcase "Same Ol' Situation" and "Don't Go Away Mad (Just Go Away)."  Bassist Nikki Sixx is all over the place and moves around the stage while allowing the fans to get their fill of his pounding bass lines and full background vocals.  The band ripped through two covers they have recorded on past efforts, the hit "Smokin' In The Boys Room" as well as their own take on "Anarchy In The U.K."  Tommy Lee contributed tons of skin bashing, vocals enhancements and ad libs, and a killer drum solo that is a spectacle to behold, to say the least.  Dropping two songs from there last release, the band came full circle in presenting material from one end of their historic career to the other, with "Motherfucker Of The Year" and 'Saints Of Los Angeles" eliciting as big a response as older tracks like "Live Wire" and "Louder Than Hell."  Guitarist Mick Mars was no worse for wear as he tossed in every guitar solo, riff, ping, and squeal we all grew up and cut our proverbial rock  'n' roll teeth on.  The band seemed to hit their stride as they approached the encore of the evening.  After hitting the Shout At The Devil era with "Looks That Kill" and the title track, the boys were rolling and closed the evening with one of the best one-two-three punches available - "Dr. Feelgood," the powerful "Kickstart My Heart," and the bands power ballad "Home Sweet Home."  If they had to go, at least they are going out with style, attitude, and rocking... just as they have done for the last 34 years. 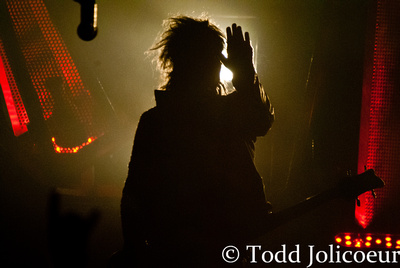 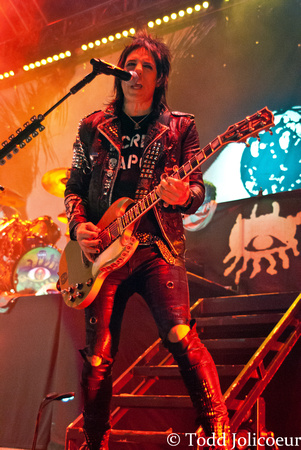