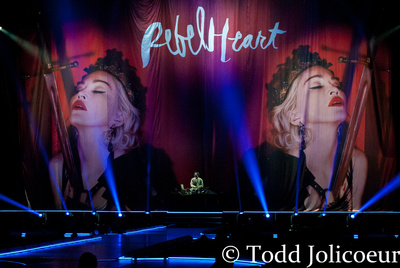 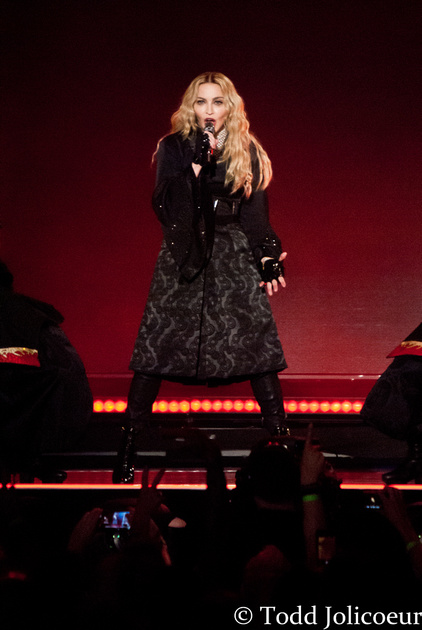 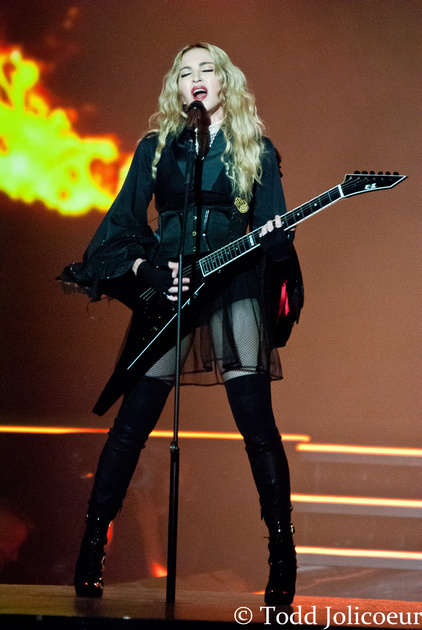 What can you say about Madonna that hasn't been said before?  Not much, except that this performer still has the goods and knows how to bring her "A" game - and she has to when she is playing Joe Louis Arena in Detroit, MI - the place she first called home.  The crowd mulled about as a DJ entertained them for about an hour.  Once the 9:00 hour struck, the place started to fill up and the buzz in the venue started to increase by the minute.  As the time crept by until the expected arrival of the woman of the hour, the anticipation grew.  When the final track of warm-up music was played, the audience got to their feet and the excitement in the air multiplied.  The lights went out, the kabuki dropped, and away we went... on a musical journey with the original Rebel Hearted Material Girl.  Pulling songs from her latest release, the tour's namesake Rebel Heart, Madonna kicked the night off with two new tracks - "Iconic" and "Bitch I'm Madonna" before grabbing a guitar and rocking the hell out of the arena with a killer version of "Burning Up."  The first two songs in the opening sequence were supported by video montages, which was the case with other new tracks featured through the evening during set and costume changes, including "Messiah," "S.E.X.," and "Illuminati."  Tonight's performance was not only about the songs, but the complete show - from the costumes, to the dancers, to the acrobatics and more.  If you wanted to hear the songs exactly as they were first recorded, you should have stayed home, because  tonight's show included stripped down versions of some favorites, while others got a medley-mix, and a few more got a new vibe wrapped around them creating a fresh sound for some of the tracks.  While referring to the crowd and show, Madonna kept speaking of Detroit, Michigan, the fact that she was a hometown girl, and was proud to be witness to the revitalization of the city.  Showcasing the 2015 release, more songs were cultivated to demonstrate once and for all that Madonna is timeless. 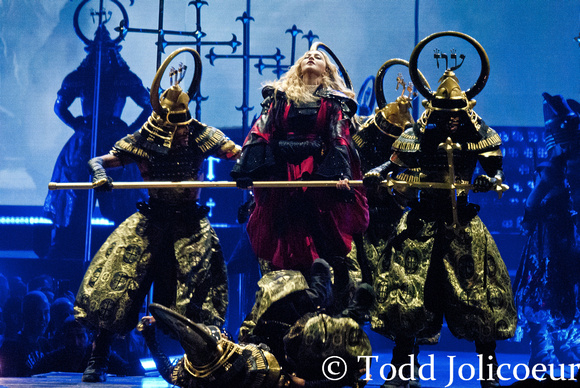 Some of the songs added to the festivities to expose the audience (if they weren't already) to the new material included an awesome 1-2-3 punch of "Holy Water," "Devil Pray," and "Body Shop," with the inclusion of a bit of "Vogue" in the first track of the trio.  Ramping the show up and the showmanship down, Madame Ciccone played some acoustic tracks for the crowd with a guitar and a ukulele including "True Blue," "Who's That Girl," and one of my personal favorites, "Frozen" - which incidentally was an addition to the typical setlist for the tour and hadn't been played live in six years, and a cover of "La Vie En Rose" - dedicated to her daughter who was in attendance.  The dancers and other performers on the stage added texture to the show, especially the sway poles - go see the show, this cannot be described properly... you need to see it to understand it!  Getting even deeper with tracks from her catalog and spinning them as new grooves, Madonna introduced her fans to a hybrid of "HeartBreakCity" and "Love Don't Live Here Anymore" as well as mixes featuring "Like a Virgin" swirled with "Justify My Love" and "Heartbeat" and "Dress You Up" which featured "Into the Groove" and "Lucky Star."  Pulling other classics into the fray and mixing them in with the newer songs, the show was packed with music from everyone, whether you are a fan of tracks like "Rebel Heart" (which she dedicated to her father) and "Unapologetic Bitch" or if you lean on the classics like "Material Girl" and "Holiday."  You are doing yourself an injustice if you don't get out and see the show when it hits your town, state, or country [TOUR DATES HERE].  There is only one Madonna and only one tour where you can hear these songs alongside each other as well as witness Madonna's performance of them and her overall stage presence.  Thanks Madonna for showing Detroit (and the rest of the world) that you are still a powerhouse singer, electric performer, and an original - I cannot wait to see what is next up your sleeve.  Welcome home to Detroit and come back anytime!!!