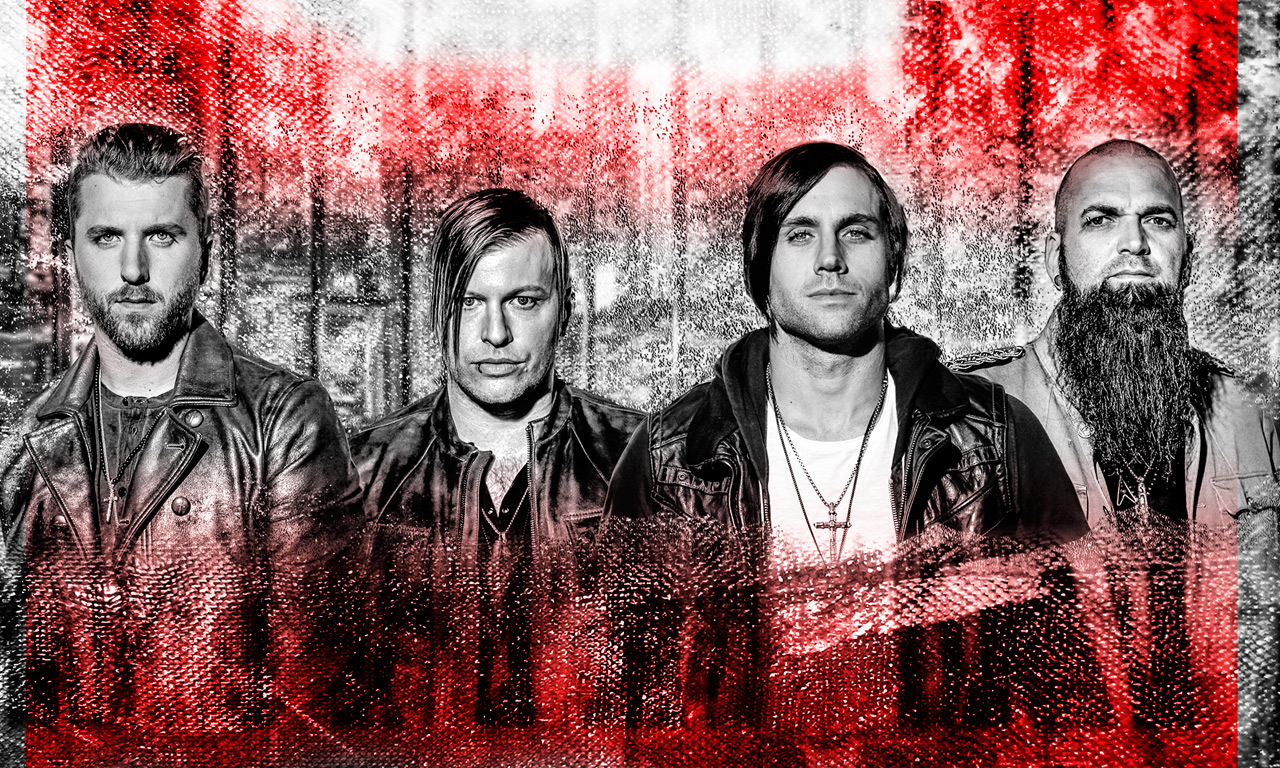 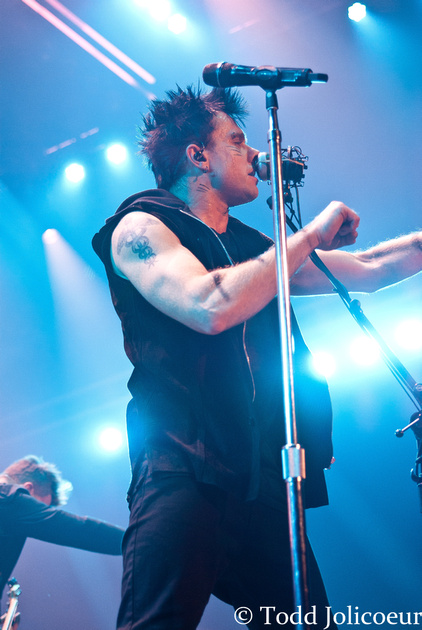 Three Days Grace brought a killer show across their homeland of Canada, and the stop in Windsor, Ontario was as exciting a show as I have seen in a long time.  The sold out show opened with Halestorm's energetic show and the night only accelerated from there.  The night was full of firsts and even featured a solemn moment or two.  Each band was making their debut appearance at the venue, and that added to excitement that passed from stage to audience and back again.  After a great opening set, the stage was transformed and the four Canadians took to the stage and delivered a set full of hits and enough new material to keep everybody on the edge of their seat waiting for the next song to make its way through the sound system. 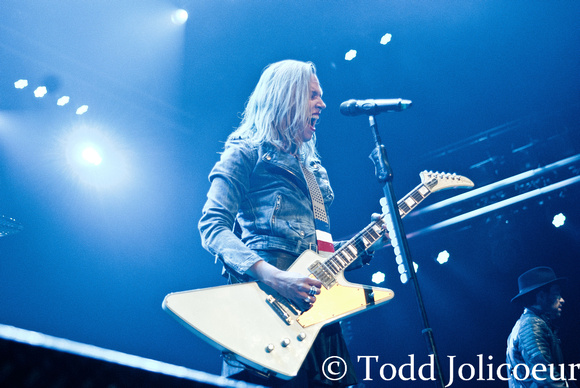 Halestorm - siblings Lzzy (lead vocals/guitar) and Arejay (drums), along with Joe Hottinger (guitars) and Josh Smith (bass) - were amped up and ready to crush the capacity Windsor crowd that packed The Colosseum at Caesar's Windsor in order to catch the young band.  With their third album being released less than a year ago, the foursome brought a ton of new material as well as a few classics from their first two efforts to entertain and recruit some new Storm Chasers (the nickname given to the bands fans).  The first five songs the band kicked out were all newer tracks from 2015's "Into The Wild Life" and the rocking tunes whipped the crowd into a frenzy.  Once the new material was unleashed, the band slowed the pace for a moment to pay their respects to those fallen the evening before when terrorists attacked a club they had headlined months earlier - Bataclan in Paris, France.  The band then jumped into the unscheduled track "Rock Show."  Adding to the festivities with three more tracks - Love Bites," "Freak Like Me," and set closer "I Miss The Misery" - from the bands sophomore effort The Strange Case Of..., the energy level was high and charging, especially when the band extended the jam during the final song.  The lone track from the bands debut self-titled disc was also the bands first single.  The crowd seemed to know every word as Lzzy, Arejay, Joe, and Josh rocked the sensually stimulating "I Get Off."  If you haven't seen Halestorm, you need to - they are living proof that rock is not dead... as a matter of fact, rock is quite young and has a lot of life left.  For more on Halestorm, check out the conversation we had earlier in the day before the show HERE. 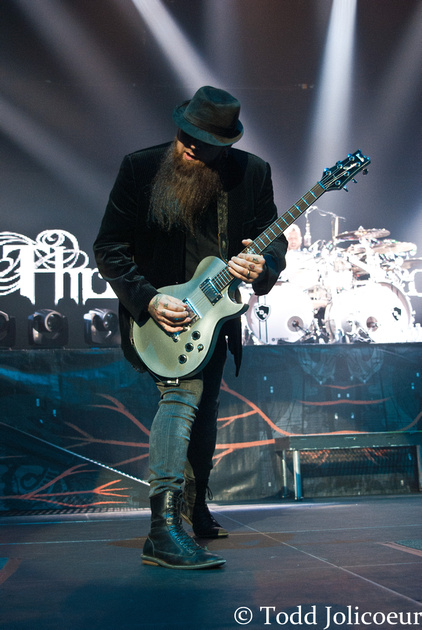 After a short intermission to do a quick set changeover, the house lights dimmed and the crowd went absolutely crazy as the opening notes of the bands first cut of the night "I Am Machine" ripped through the venue and the stage lights came up.  Jumping from new material to open the show, the band reached back to their debut disc for the second song of the evening with the energetic "Just Like You."  Also from that disc played tonight were the melancholy track "Home" and the charging track "I Hate Everything About You."  Singer Matt Walst took the mic on the first song and never slowed down while on the stage - he moved from side to side and front to back, smiling, growling, and singing his ass off.  His vocals on the newer material he helped create fit seamlessly into the mix with the older material.  2012's Transit Of Venus was the source of the third track "Chalk Outline," as well as the first song of the encore, "The High Road."  These tracks, while very TDG sounding still have a transitional feel to them, even live.  Guitarist Barry Stock does what he does best - he plays guitar as solid as anybody without the flashy showmanship that a lot of guys use; he stands his ground and unleashes killer riffs and solos, and even throws in some double-neck guitar for fun.  Continuing the trend of leaping around their catalog, the guys killed it with another new track, with "So What" from the 2015 release Human.  In all, five songs from the latest disc were dropped into the evenings performance, including the first single that was released a year before the disc was launched on the public - "Painkiller" which was followed immediately by the mellow rocker "Fallen Angel" that came across better live than on disc.  Also in the fray from the collection was the angst driven third single "Human Race."  Bassist Brad Walst is a constant ball of energy, with his roaming of the stage, little jumps, and fluid playing all culminating in a cool performance.  My personal favorite, 2006's One-X was given fair treatment with four tracks getting live treatment tonight.  The Colosseum crowd came together and rocked out on songs like "Pain" and "Never Too Late," but the band and seemed to step up their game with the sexually driven beat of "Animal I Have Become" and the monstrous groove of set closer "Riot." Drummer Neil Sanderson provided a solid anchor for the entire show, but one of the highlights was the colorful and explosive drum solo he contributed mid set.  Not forgetting the bands 2009 release Life Starts Now, they performed "Break" and "The Good Life" for the sold out crowd.  The set covered the bands catalog, included tons of sing-a-long moments, and a great performance... what more could you ask for?  If you get the chance, grab a ticket to see Three Days Grace as soon as you can. 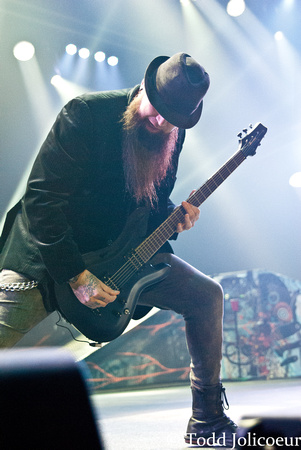 Setlist: I Am Machine - Just Like You - Chalk Outline - So What - Pain - Break - Human Race - Home - Painkiller - Fallen Angel - The Good Life - I Hate Everything About You - Never Too Late - Animal I Have Become - The High Road - Riot 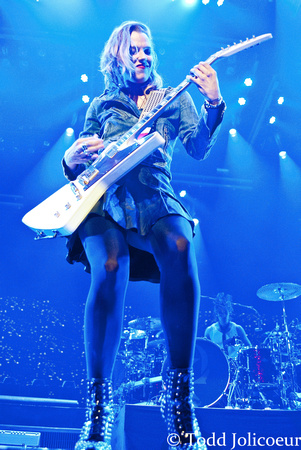