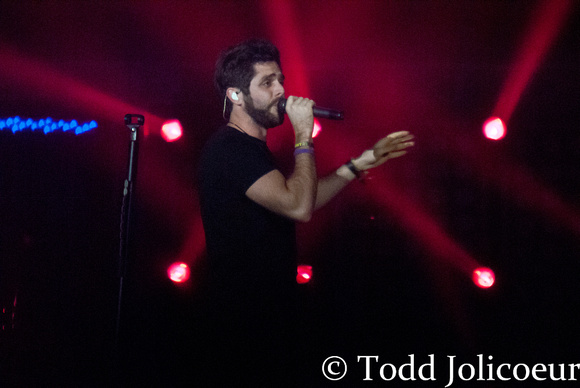 CMT On Tour brought their current package, Suits & Boots featuring Brett Eldredge and Thomas Rhett wsg Danielle Bradbery to Toledo's Huntington Center and the night was packed full of music, hits, and good times.  From originals to covers to songs penned for other artists, each of the performers set list included fun for everyone that ventured out on a Thursday evening. 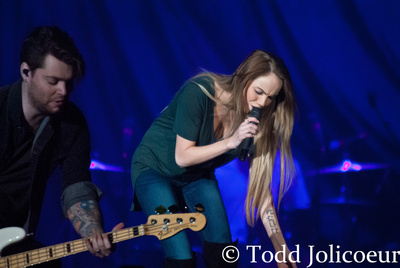 Danielle Bradbery kicked the show off with "Shot Of Whiskey" and quickly demonstrated why she is on the Ones To Watch list year in and year out.  Since her 2013 debut, she has been forging a path with her voice and songs, including set closer "Friend Zone," which comes from her latest, yet unnamed and unreleased disc.   In the middle of the fun, she included a cover of Tori Kelly's "Should've Been Us" which sat nicely against her own tracks like "Heart Of Dixie" and "Room For Two."

Thomas Rhett is a killer song writer and recording artist, but he comes alive on stage and really PERFORMS!  From the minute his music blasted from his bands instruments through the venue's sound system, Rhett treated the crowd to a killer show.  Peppering his setlist with tracks from both of his releases, as well as a couple covers, Thomas gave everybody something to enjoy.  His 2013 release gave us great songs like "Get Me Some Of That," the rousing title track "It Goes Like This," and "Make Me Wanna."  His latest disc, Tangled Up, contributed the set opener and closer, with "Anthem" and "Crash And Burn" respectively.  Also from the new collection is the latest single "Die A Happy Man," as well as other standout tracks "T-Shirt" and "South Side."  Rhett knows his crowd and played to them all evening, smiling for photos, even taking a phone from one lucky fan and taking a selfie from on stage.  Throwing caution to the wind, Rhett and his band ripped into an awesome version of Mark Ronson's "Uptown Funk" before diving head first into two acoustic covers, the first of which was co-written by Rhett: Florida Georgia Line's "Round Here" and then Eric Church's "Homeboy."  He seemed to enjoy every moment in Toledo, and Toledo enjoyed him in return. 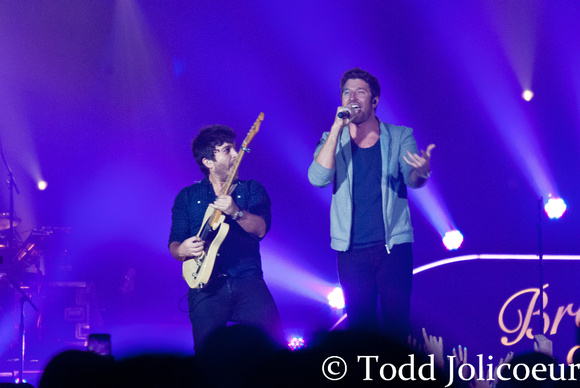 Brett Eldredge came out firing on all cylinders when he opened his portion of the evening with one of his four #1 US Country Airplay tracks, "Beat Of The Music."  Working to promote his second release, Eldredge also reached back into his debut collection of songs and performed four tracks from the 2013 album, Bring You Back.  Including the set opener, "Mean To Me," "Tell Me Where To Park," and his first #1 "Don't Ya" were played to perfection this evening, delivering exactly what the crowd was looking for.  Brett's latest disc, Illinois, was the star of his song, as far as the set list goes.  Sharing the stage with two guitarists, the singer made sure to bring each of his six-stringers to the audience's attention by dragging them down the catwalk and allowing them to show off their riffs to the Toledo, OH crowd.  Pulling seven tracks, including the two singles "Lose My Mind" and Drunk On Your Love," Eldredge offered up live renditions of "Fire," "Wanna Be That Song," and set closer "Shadow." Not wanting to be outdone by his tour mates and their selection of covers, the performer and his band jumped into the saddle of Ginuwine's bump and grind track "Pony," which set the audience on fire.  Eldredge showed off his different sides from the beginning of his set until the end, sending the crowd home with smiles on their faces and a song on their lips. 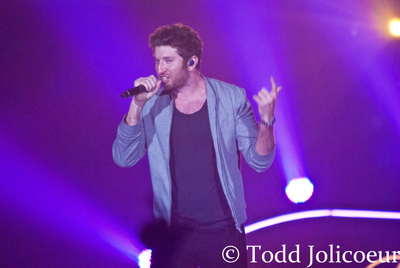 Tour Setlist: Anthem - South Side - Make Me Wanna - Vacation - It Goes Like This - Tangled - Uptown Funk - Round Here - Homeboy - Die A Happy Man - TShirt - Playing With Fire - Get Me Some Of That - Crash And Burn 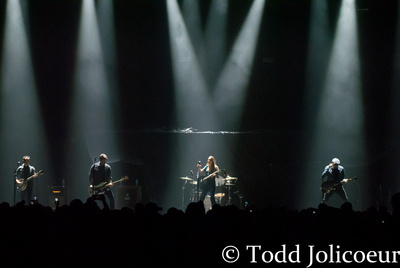 Setlist: Shot Of Whiskey - The Heart Of Dixie - It's All Good - Should've Been Us - Room For Two - Sway - Friend Zone