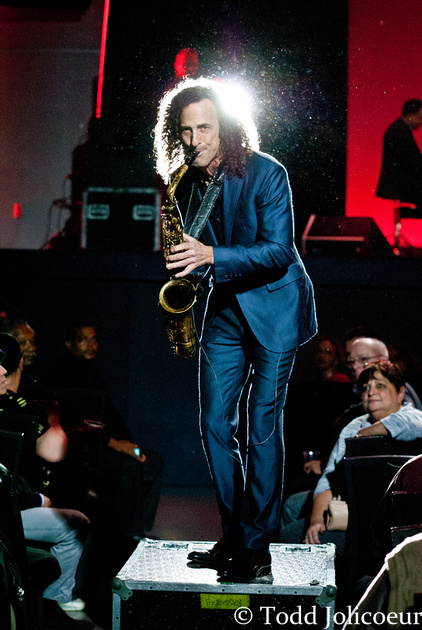 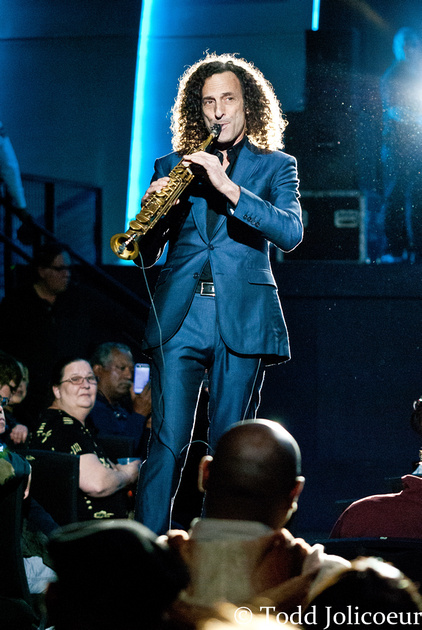 There are certain artists that are cool, regardless of the genre.  One of those artists is sax player Kenny G.  Wrapping up his 2015 touring season in Detroit on a slightly chilly and drizzle-filled evening, Kenny entertained an enthusiastic crowd from the minute the lights went out until his final note was played.  Wanting to make sure every fan had a great time, Kenny kicked of the show playing from the audience for a couple songs and demonstrating to everybody inside why his fans love him.  Not only does he play some of the smoothest jazz around, but he delivers on all fronts - from shaking hands, high-fiving during the performance, and chatting with audience members before, during, and after the show, but even taking time out for selfies and other photos after the show while making sure anyone who needs a copy of his latest disc Brazilian Nights can buy one at the merch stand.  Pulling songs from his catalog, including his latest release and his Christmas release, as well as other standards, Kenny entertained the crowd for over two hours and sent every one home in a lighter and better mood than they arrived in.  Taking time to interject anecdotes and stories throughout the show, Kenny entertained with and without his instruments.  Throughout the show, the chemistry between the saxophonist and his band was evident, as was his love for his audience.  From moment to moment, the music was exactly what was desired by the near-capacity crowd and the flow of the show was perfect; it kept the crowds energy up and their interest peaked waiting to hear what would come next through the venues sound system.  Forget any preconceived notions you have about jazz, easy listening, or instrumental only performers - if you want to see a show full of really good music performed by a tight band led by a charismatic frontman, see Kenny G when he rolls through your town in 2016.