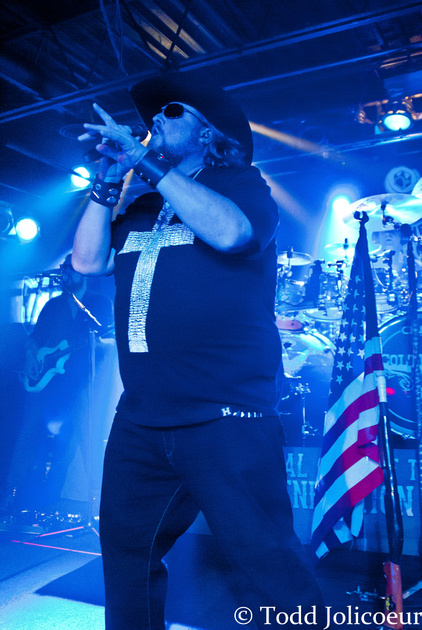 There are various types of concerts that draw fans, photographers, and journalists.  There are great concerts.  There are great shows.  My favorite is a FUN show.  That is what you get when you attend a Colt Ford show.  This isn't about some guy and his band hitting a stage, regurgitating the songs his fans have come to hear.  This is about a guy and his close friends standing around and jamming while other friends stand around, have a drink or two, and join in the fun.  From the minute Colt hits the stage, you know the night is going to take on a life of its own.  This capacity Machine Shop crowd is full of country fans, rap fans, rockers, and everybody in between.  Simply put, it's because that is the type of show you are about to experience.  Mixing his hits with other tracks from his catalog, Ford also blends in hits he wrote for other artists and even tracks that are just fun.  The band behind the man deserves a ton of credit as well for putting together a show that will please the masses.  Band leader and fiddler extraordinaire Justin Bertoldie flanks Ford on the right, shifting between a fiddle, banjo, and acoustic guitar while guitarist Spencer "Spanky" Bassett take control of stage left.  Anchoring the sound of the band is a great rhythm section of bassist Paul "Creeper" Chapman and Tim Haines on drums.  In the back is new guitarist Cole Phillips, who I am told is a 21-year-old with an old soul.  When these guys play together, its as if any stress or strain of the day just fade away and these guys jam to have a good time and forget everything else.  Colt's whole show is like that - whether he is saluting US Veterans and current armed forces heroes, or explaining that although he may be viewed as white trash by suits in the industry, there is clearly to trash in his trailer!  The songs chosen for the "Crank It Up" tour cover Colt's catalog, but demonstrate that his songs are his songs - he doesn't bend to trends or patterns.  The songs seem to flow and belong together, whether they are his latest tracks or older favorites.  The encore got the crowd re-energized, with a cool cover of Eminem's "Lose Yourself" and closing the set with the track Colt co-wrote with Brantly Gilbert and Jason Aldean took to the top of the charts, "Dirt Road Anthem."  After this, who wanted to leave?  Nobody - hence the full bar for at least an hour after the show ended.  As much as Colt plays the Shop and the crew and fans love him, he might as well call Flint, MI his second home. 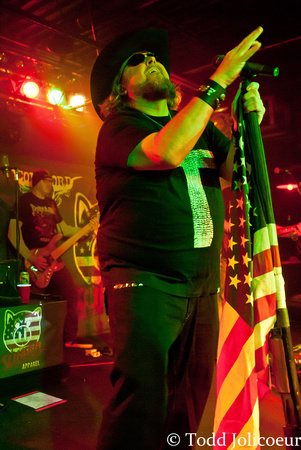 Setlist: Answer To No One - The High Life - Crank It Up - Back - Crickets - Country Thang - Drivin' Around Song - Mr. Good Time - Waste Some Time / Cricket On A Line / We Like To Hunt / This Is Our Song - Workin' On - Ride Thru The Country - She's Like - Chicken And Biscuits - Dirty Side - Hip Hop In A Honky Tonk - Farm Life - Washed In The Mud - No Trash In My Trailer - Thanks For Listening - Lose Yourself - Waffle House - Dirt Road Anthem