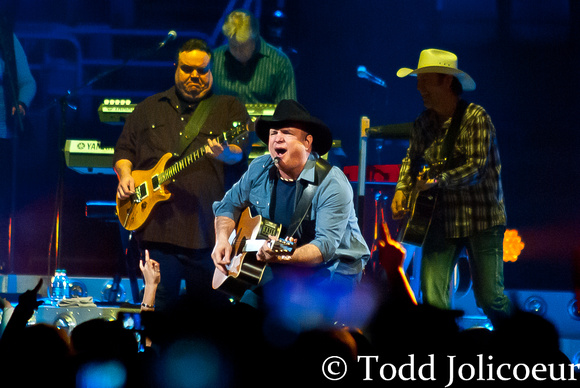 Press conferences surrounding tours can be overdone with tons of pomp and circumstance, and typically are.  The small assembly of press to welcome Garth Brooks back to Detroit after 18 years was nothing short of amazing.  The legend took to the small stage and thanked everyone for showing up and quickly opened the floor to questions, fielding questions from local television, radio, and print, and even some web-based press.  Interrupting the conference for a short bit when a new show was put on sale in Sacramento, CA, Brooks promptly returned in order to provide each outlets a couple minutes to ask another question or two, get a quick photo, and in some cases an autograph.  His joy in returning to the stage, specifically in Detroit, was evident the moment he started speaking with everyone in the room. 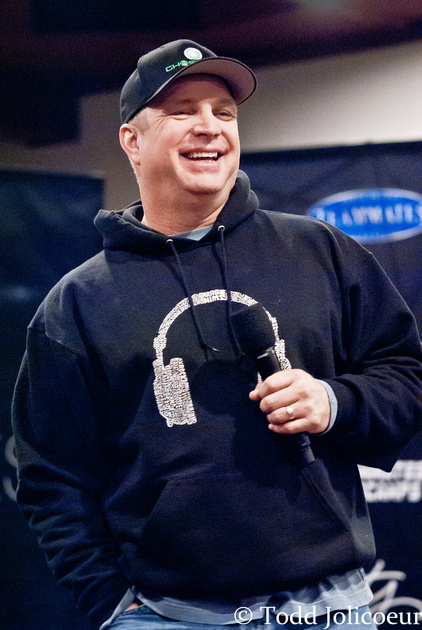 Toddstar: You talk about content being king, and that is so true, especially in a live setting. You set the standard for the ultimate country show. You took a rock show, combined it with what you love, and put it on stage. How will you keep that energy and feeling alive with this comeback?

Garth Brooks: You'll see music is timeless, for one, and the energy that comes from music is timeless. And the people that come to see it, when those two energies meet, then you're gonna see... you are gonna look around... I promise you, I have been to more Garth Brooks shows than anybody else in here [mass laughter], five minutes into this things you be going [looks around] "Holy crap."  It'll just be the audience you watch. There's something that happens. They come here, its a lovefest. They come here to have fun, and they are the only person in the building. You'll see people tonight singing like you would not believe. You'll think to your self, 'I would have never guessed that that person...' They are totally uninhibited. They know they come here, they know its fair game, come here, have fun, raise your voice. That's what we do, so that energy kinda provides itself. And again, I can only show you once you've seen it.

Toddstar: Building on the other Trisha [Yearwood] questions, what's it like? Now you are an empty nester. You are out and celebrating this comeback with Trisha by your side every night. That's gotta feel...

Garth Brooks: It's fantastic. Now when we started touring, Sandy and I were married. We didn't have cellphones, so I wasn't much of a partner to her. I'd would go three or four days without contact. On down the road, you would find a payphone booth somewhere, and talk for three minutes, and that was it, so the guilt kinda sets in early. Then when they hand you your first child, now the guilt really starts to set in, because your parents were there at everything you did, whether you played the game or sat on the bench, they were there. So that gets into your soul, your spirit. So eventually you have to just walk away. Raise your kids, go through a divorce, and lose your mom all in the same year, it was tough for me. But now coming back, the kids are now on their own, with their own lives in college, and will text me every now and then - it's the only way I get to hear from them - and you are touring with the love of your life. So right now, it couldn't be better. Knock on wood and thank God.

Toddstar: Garth, some of your musical tastes lay very close to my heart. You did something way back when that I still love and still listen to "Hard Luck Woman." Please explain to me what a rush, as a fan and performer who has drawn from their show, what was that collaboration like?

Garth Brooks: It was great. First of all, I didn't know who these guys were.  I knew as a fan who they were.  They didn't have Peter and they didn't have Ace with them. They had Eric and Bruce with them. So, when they were coming in, I'm telling everybody, "hey, bolt down anything they can steal, whatever, because they are coming to the studio. These guys turned out to be the sweetest guys on the planet. Gene had just had a baby, so he was showing baby pictures. Paul had his girlfriend there and she was a doll too, so they were all sweet and everybody was really nice. I couldn't believe it. Then you get into the studio and you look over and there's Gene with his bass dropped way down here and he's playing and you are singing.  You are doing your best Peter Criss impersonation, but you're not getting it done. but they are so sweet to you. And it was fun.  You know, when they approached me, I said 'Oh please tell me I get to do "Detroit Rock City," right?  And they say, 'No.' And I was like, 'Anything but "Beth."  Just don't give me "Beth."'  And when they said "Hard Luck Woman," I said that was perfect.  It was fun. 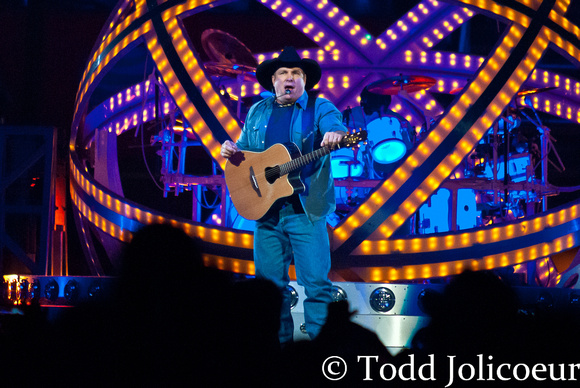 Very few artists can walk away from the spotlight and return to the fanfare - AND SELLOUTS - that Garth has experienced from the onset of this tour.  Detroit was no different, as Garth had sold 107,000 tickets for 6 shows (as of Friday afternoon), spread over four days and two weekends - featuring double shows on Saturday February 21 and 28.  After a small warm-up from one of his background vocalists, Garth and crew were ready to entertain a packed Joe Louis Arena.  Once the lights went out and the sound cranked up, the crowd was entertained from first note to last.  Brooks and band understood this crowd was here to hear the classics and be witness to a killer show.  The setlist is chock full of bonafide hits and never lets the crowd sit back for too long.  The addition of three tracks from his latest peppered the set with some new songs, but they didn't seem to faze the crowd in a negative way or give the audience a reason to wander too far. A welcome addition to the show was the interjection of a short set from Trisha Yearwood a little more than midway through the set.  A duet with Garth on the front end and Garth playing guitar on the back end of the five-song set provide a great transition for fans of the artists.  Watching Garth and his band move through the songs, the energy levels were always elevated and the excitement shone through their faces and performances.  Brooks interjected just enough banter to get the crowd behind him - not that they weren't already.  His love o f his fans was no more clear than when he introduced "The Thunder Rolls."  After talking about how fans have explained the importance of this track, he simply stated, "I hope we play this better tonight than we have ever played it before."  After a rousing rendition of "Shameless," Garth explained that the next song was one of the more exciting moments in the set for him; that he gets more excited as he sees this song coming up in the setlist and then tore into "Callin' Baton Rouge."  Teasing the crowd near the end of the next song when he explained the band doesn't play that mystical third verse of "Friends In Low Places" any longer, he gave a huge smile and then gave the packed house what they were looking for.  After a few more songs, he closed the show with three encores - including old school ("Much Too Young (To Feel This Damn Old)")and new school ("Mom") Garth tracks and even a couple covers: Aerosmith's "The Fever" and Trisha Yearwood's "Walkaway Joe."  The first weekend of shows is in the books in Detroit.  If you have the chance, catch one of next weekends shows in Detroit, or any other city on the ever expanding tour itinerary.  This is a show not to be missed!!! 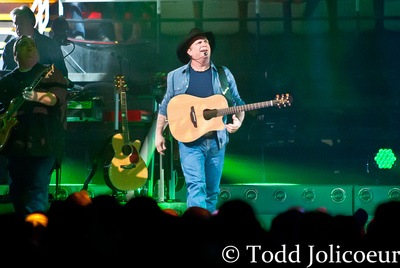 Setlist: Man Against Machine - Rodeo - The Beaches Of Cheyenne - Two Pina Coladas - The River - Two Of A Kind, Workin' On A Full House - Ain't Goin' Down ('Til The Sun Comes Up) - Unanswered Prayers - That Summer - Papa Loved Mama - The Thunder Rolls - People Loving People - In Another's Eyes (w/ Trisha Yearwood) - * - Shameless - Callin' Baton Rouge - Friends In Low Places - The Dance - The Fever - Mom - Much Too Young (To Feel This Damn Old)  - Standing Outside The Fire - Walkaway Joe

* Trisha Yearwood Setlist: XXX's And OOO's (An American Girl) - Prize Fighter - How Do I Live - She's In Love With The Boy