A guitarist going out on an instrumental solo tour doesn't sound like much of a show, but when that guitarist is one of rock's busiest musicians, the show is bound to be a powerhouse evening of killer riffs and great fret work.  From the moment John 5 hit the stage at The Token Lounge in Westland, MI, the guitar wizard didn't let up.  Taking a few cues from his days job and his passion for horror movies, John came out with makeup covering half of his face and he stalked the stage like one of those classic Universal monsters that he loves so much.  Pulling songs from his catalog, as swell as a few covers, 5 gave all of his fans in the house this evening something to smile about.Pulling a track from each of his first three solo discs, John showed he wasn't a one-trick pony.  Although he played seven tracks from his latest disc, Careful With That Axe, he also filled the set with other tracks, including a few cool covers.  His debut disc Vertigo was represented by "Feisty Cadavers" and the song sounded fresh amongst the newer material.  "Sin" which comes from his sophomore effort, Songs For Sanity and his remix album Remixploitation, was a great drop near the front of the set.  The Devil Knows my name had two tracks in tonights set: "First Victim" and a cover of Chet Atkins' "Young Thing."  The lone track from God Told Me To was a phenomenal cover of Michael Jackson' "Beat It," which drove the crowd into an absolute frenzy.  Again, the latest release from John 5 (which you can pick up autographed from the merch table on the tour) was well represented by "Flight Of The Vulcan Kelly," "This Is My Rifle," "El Cucuy," a cover of Jerry Reed's "Jiffy Jam," "Six Hundred And Sixty Six Pickers In Hell, CA," and a couple others.  Closign the show with a rousing medley of covers, John 5 once again demonstrated to his home town audience why he is one of the best around.  His love of all music shows through in his musical selections and his talent.  If you get a chance to check out Johnh 5 and The Creatures this month, don't miss it! 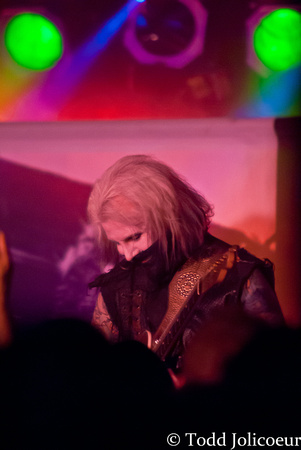