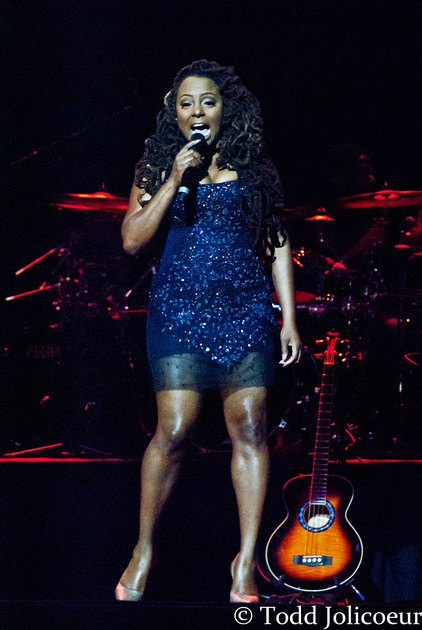 Having stumbled across Ledisi's music a year or so ago, I instantly dug the music and periodically throw the disc in and play it like crazy for a couple days, then retire it for a bit so as to not get sick of it.  Luckily, I now have a Ledisi live show under my belt.  Entering the packed, SOLD OUT SoundBoard, the energy was high, but the expectations were even higher.  After a killer set from Leela James (see the review of her show with photos below) and a set from Raheem Devaughn that elicited more than a couple screams from the women in the crowd, the audience was more than ready for the headliner to take us away with her on an intimate journey.  As the lights dimmed and the din of the crowd rose, the music started and soon a spotlight graced center stage and there was Ledisi in all her glory, waiting to rock Detroit with a show only she can deliver.  Interjecting songs from her latest album, 2014's The Truth, along with other tracks from previous efforts, the setlist was bound to fulfill everybody's wish list for the evening.  Ledisi worked the Motor City crowd and stage like a woman on a mission.  Between songs, and sometimes even during them, the chanteuse added personal touches that drew the audience in and kept them hooked from opening note of the show until the last note was played and the lights came up.  Picking prime moments of the show are difficult, as the show was full of perfect moments that pleased everybody in attendance.  Taking a breather from her typical musical fare a few songs into her set and breaking it down with a single spotlight from center stage, Ledisi demonstrated early on the strength of her voice and talent as a performer.  Whether drawing on the sultry and sexy side of her nature and songs from her catalog or pulling from deep within her soul and tearing through more prolific material, Ledisi is an entertainer not to be missed.  Her love of music and passion for entertaining are evident with every note performed and ring through the crowd with each smile, wink, and gesture.  There are still more than a handful of dates left on this tour - don't miss this show... 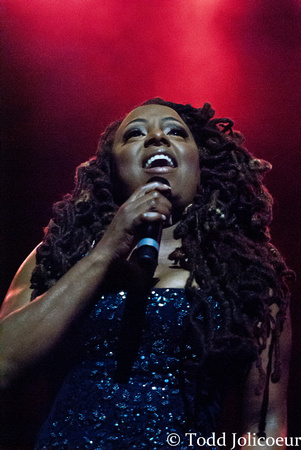 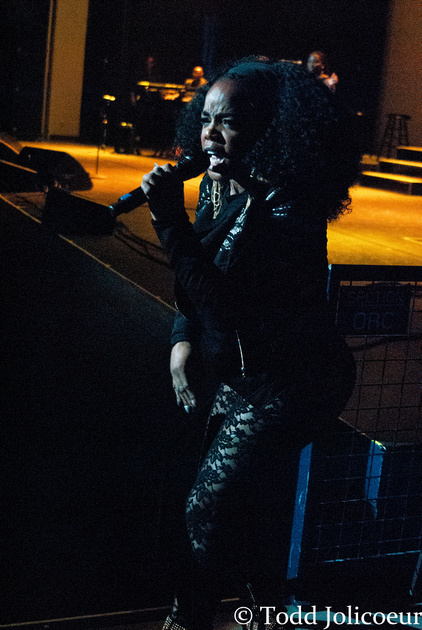 Show opener Leela James rocked my socks off.  From the minute she landed on stage in Detroit, she aimed to please and entertain - and she did both.  Moving through songs that cover her entire catalog, including last years Fall For You, Leela put on a show that was energetic and full of smiles.  The enthusiastic audience was drawn in from the onset and didn't become disengaged until Ms. James left the stage and hit the merch table to share a few moments with her fans (this guy included).  I had never heard of her before tonight, but bought a CD on my way out to meet her myself.  A highlight of her performance was when she left the stage and walked the perimeter of the crowd on the main floor and then walked around the entire first level, singing to fans as if she were in her living room with friends... come to think of it - she was with friends.  A casino showroom full of Detroit friends... old and new.  So glad to have made your acquaintance Leela. 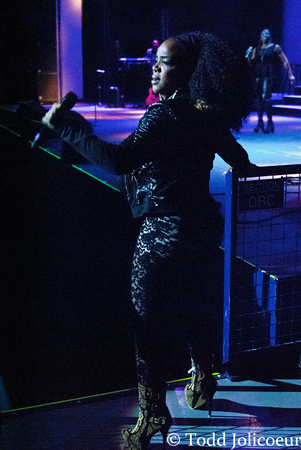