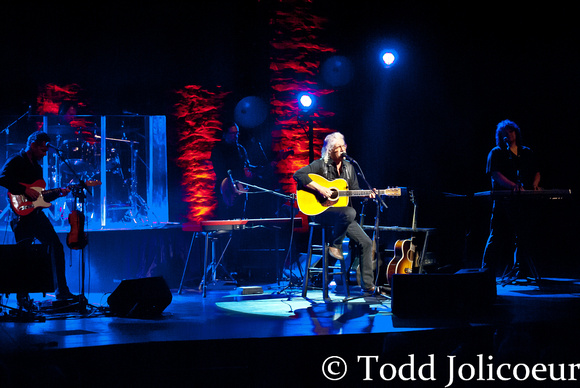 Venue: The Berman Center For The Performing Arts 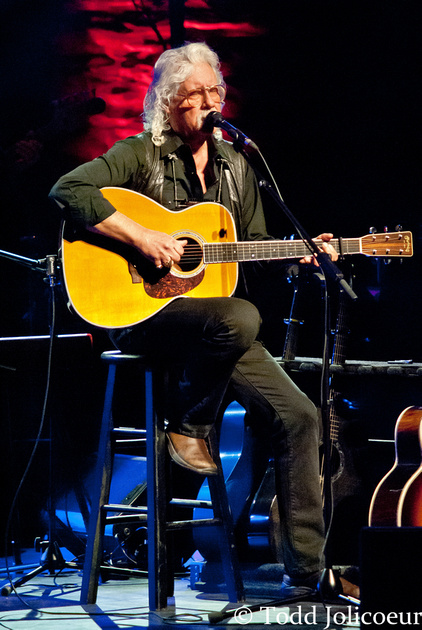 Not many artists can tour behind an album's 50th anniversary, but then again, Arlo Guthrie is not just any artist.  In support of the half-century mark for Alice's Restaurant, Guthrie and his band hit the road to spread the love and joy of five decades.  Tonight's show in West Bloomfield, MI at The Berman Center for the Performing Arts was another great night on this celebratory journey.  Opening with a video presentation of "The Motorcycle Song," the night was bound to be special.  As the video drew near, the band hit the stage and was soon joined by the man of the evening.  Arlo ran through the number and then explained that what we were just treated to was over 40 years old and the "video" had recently resurfaced.  Wanting to spend the evening focused on the music and the stories behind the songs, he quickly introduced his band and moved into the next song.  Some songs were presented straight on like "Chilling of the Evening," while others were either preceded or followed by stories.  Not wanting to alienate anyone in attendance this evening, Arlo welcomed the youngsters in the crowd with his own dark tale, "Ballad of Me and My Goose" to applause, laughter, and some goodhearted groaning [you have to know the song/story to appreciate this].  Sticking with mostly classic from his own catalog, Guthrie also gave a nod to other performers with excellent covers of Lead Belly's "Pig Meat Blues" and "City Of New Orleans" from Steve Goodman.  After a brief intermission the real treat was delivered, with the classic "Alice's Restaurant Massacree" being presented on the 40th anniversary of the fall of Saigon and as part of a one-two punch with "When A Soldier Makes It Home."  After a couple more Arlo classics were played, as well as the aforementioned "City Of New Orleans," Guthrie dug deep and wrapped the show with two of the most popular songs from his fathers catalog, "This Land Is Your Land" and "My Peace."  Who knew a 50th birthday party would be this much fun???  Do yourself a favor and join the party when this tour rolls through your town. 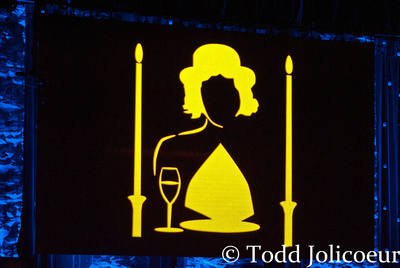 Tour Setlist: The Motorcycle Song - Chilling Of The Evening - Darkest Hour - Ballad Of Me And My Goose - Ocean Crossing - Last Train - Pig Meat Blues - Coming Into Los Angeles - Alice's Restaurant Massacree - When A Soldier Makes It Home - City Of New Orleans - Mothers Voice - Highway In The Wind - This Land Is Your Land - My Peace