Black Stone Cherry made their way across the US before heading over to Europe for some dates in June, and before another swing through the State in July.  As the tour wound down, the guys - Chris Robertson, Ben Wells, Jon Lawhon, and John Fred Young - found themselves in familiar territory, The Machine Shop.  Headlining their first show in about four years here, they couldn't wait to hit the stage.  From the minute they started playing "Rain Wizard" through to the final note of "Lonely Train" at the end of the encore, these guys were full of piss and vinegar, and shared that fun attitude with the crowd.  Playing tracks from all four of their releases, including the 2014 disc Magic Mountain, the band seemed to hit every high spot in their catalog and even included some deeper cuts.  The band's debut release was highlighted by set bookends opener "Rain Wizard" and closer "Lonely Train."  the bands sophomore effort, Folklore & Superstition, was represented with the disc's opening track "Blind Man" while the third disc (and my personal favorite) Between The Devil And The Deep Blue Sea contributed five tracks, including two that were featured in the encore: "White Trash Millionaire" and "Blame It On The Boom Boom."  The latest disc was heavily supported with five songs as well, including the video single "Me And Mary Jane."  The band played as a tight unit, without being wound too tight.  Guitarist Ben Wells was his normal energizer bunny running all over the stage, while powder keg John Fred Young was bombastic behind the kit.  Lead singer and lead guitarist Chris Robertson controlled the flow of the show and the crowd with his voice, his licks, and his overall demeanor.  Not to be outdone, bassist Jon Lawhon gave his all and was constantly switching side of the stage with Wells, in order to give both sides of the crowd ample attention.  When these guys travel back to the US in July, do not miss this show... this energetic explosion of solid rock is not to be missed! 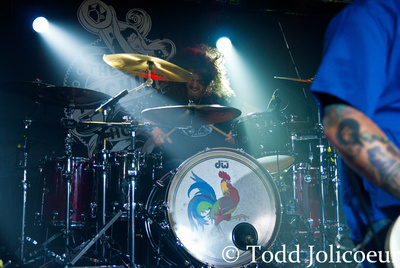