Bret Michaels brings energy to the stage that is undeniable - every time!  Headlining the Saturday night show of Woodhaven, MI's annual Uncle Sam Jam was no different for this rocker.  Opening with one of many rockers and ballads he made famous with his other band, Poison, Bret came out swinging and ready to knockout this crowd.  The one-two punch of "Talk Dirty To Me" and "Look What The Cat Dragged In" brought the crowd to its feet, and they stayed there until the show was over some 75 minutes later.  Other Poison rockers that were included in tonight's festivities were the Loggins/Messina cover of "Your Mama Don't Dance," the sexually charged "Unskinny Bop," and a personal favorite "Fallen Angel."  All through the show, band leader and guitarist Pete Evick was roaming the stage and running back and forth on the walkway out to the crowd, showcasing his guitar playing on countless solos and riffs.  Going back to his roots with a song that he learned back in camp, as he explained to the enthusiastic crowd, Bret and his band played Lynyrd Skynyrd's "Sweet Home Alabama" and kept the crowd totally engaged.  The crowd loved when Michaels grabbed an acoustic and played two ballads that will forever be a part of his legacy - "Something To Believe In" and "Every Rose Has Its Thorn."  Anchoring the show was the Bret Michaels Band rhythm section of Bart Harris on bass and Mike Bailey behind the drum kit.  As always, the band was more than amply supported by Jozwiak on keyboards and background vocals.  Bret's new release True Grit features a brand new track - "Girls On Bars" - that was featured in the middle of the set.  The song went over well with the audience and blended well into the catalog hits played this evening.  Standing side stage when the set was over, I watched Bret shake hands and take a couple photos with fans while listening to the crowd cheer and chant for his return.  With that, he went back center stage and closed the show with the familiar party anthem "Nothin' But A Good Time."  As Michaels and the band played their asses off, whipping the crowd into a frenzy, you couldn't help but notice the front man and his cohorts had as good a time as the fans did... nothin' but a good time indeed! 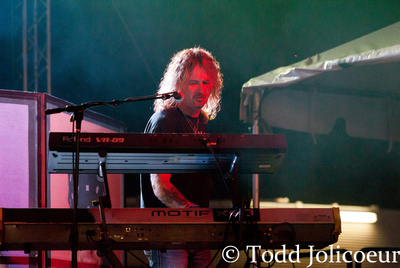 Setlist: Talk Dirty To Me - Look What The Cat Dragged In - Sweet Home Alabama - Your Mama Don't Dance - Girls On Bars - Something To Believe In - Unskinny Bop - Every Rose Has Its Thorn - Fallen Angel - Nothin' But A Good Time