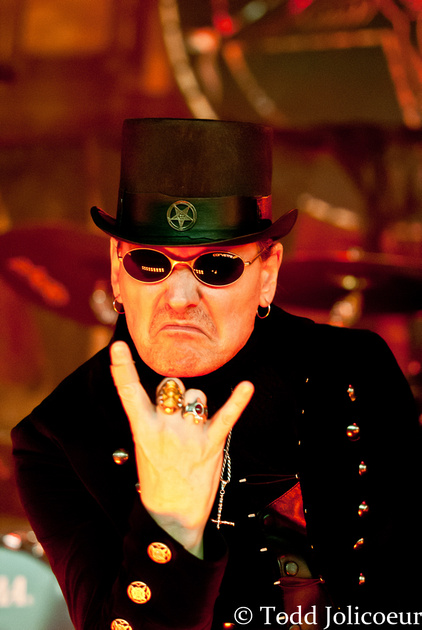 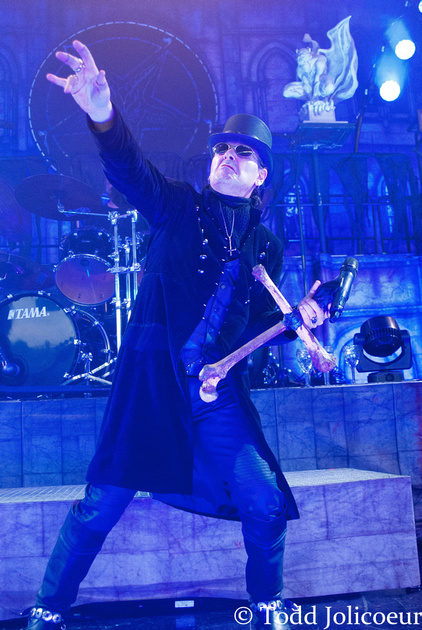 The annual metal traveling show, Rockstar Energy Drink Mayhem Festival rolled into Detroit and brought a lot of great metal with it.  Scaling back a bit from previous years, there was a main stage featuring Slayer, King Diamond, HELLYEAH, and The Veil Wears Prada.  Out in a remote area of the venue was the Victory Records stage with several bands, including: White Chapel, Thy Art Is Murder, Jungle Rot, Sister Sin, Shattered Sun, Feed Her To The Sharks, and more.  Two bands drew me to the line up this year: King Diamond and Sister Sin. 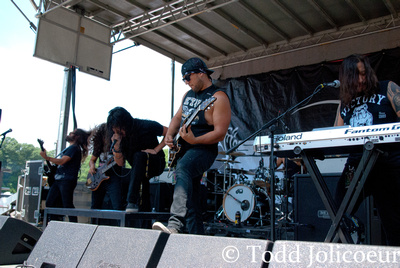 Soon after arriving, I was able to see new Victory band Shattered Sun, who had a decent crowd checking them out so early in the day.  The band played a great set with songs from their debut release Hope Within Hatred. 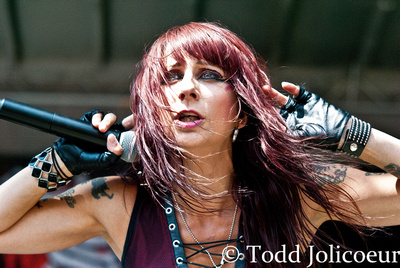 The next band we enjoyed on the stage was Sweden's Sister Sin.  After a cancelled tour date in Detroit a couple years ago, they finally gave us a dose of great rock and roll.  Liv, Jimmy, Dave, and Strandh gave the crowd a 25-minute set full of straight ahead rockers without much time wasted with banter and antics.  With a setlist of the following: "Food For Worms," "Outrage," "Chaos Royale," "Fight Song," "One Out Of Ten," and set closer "Sail North" the set was sure to please anyone that knows the bands catalog and will definitely recruit rock lovers that were exposed to the band while there to see other artists.

Taking a breather from the live rock and roll, we found as many out of the way areas possible to sit and chat with a few of the Victory bands (click the band names for direct access to the interview): Corpus Christi, TX's Shattered Sun, Aussie new comers Feed Her To The Sharks, Swedish rockers Sister Sin.  After running through various interviews, I headed over to check out the merch and vendor area.  The Metal Of Honor tent was prominently displayed and was everything Elenie Reese said it would be during our preview interview.  I then made my way to the main stage, where I caught the last half of The Devil Wears Prada's set. 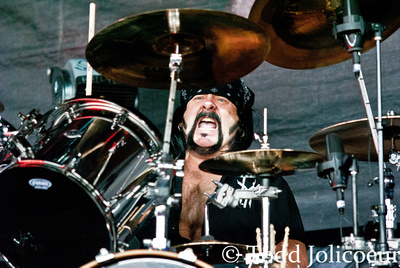 Up next was HELLYEAH, who tore through an energetic set that featured tracks from their latest disc and saw all five members giving the fans exactly what they came to see.  The band was on fire and ready to rock, just as bassist Kyle Sanders had eluded to during an earlier interview.  Setlist: Soul Killer - Sangre por Sangre (Blood For Blood) - Demons In The Dirt - War In Me - Moth - Cross To Bier (Cradle Of Bones) - Say When - You Wouldn't Know 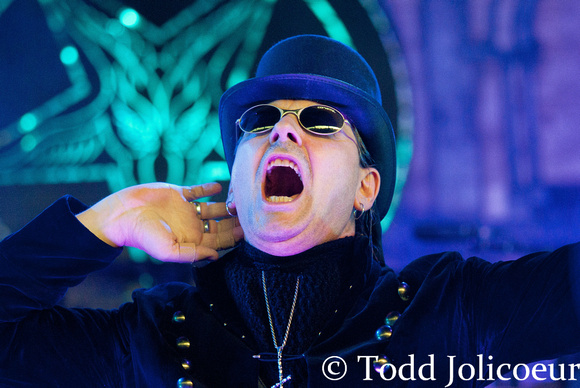 Following a great set, the stage was slowly converted to an elaborate castle that was awaiting the arrival of a king... King Diamond.  A few days earlier, King was diagnosed with a severe eye infection, but he refused to do anything but carry on with the tour.  This meant no trademark make-up, but it didn't minimize the visual power of the show with over the top staging, lighting, and killer playing from the band.  As they powered through an awesome setlist, the crowd enjoyed every killer vocal from King himself (whom I had the pleasure of meeting just before his stage time), every guitar lick from both Andy LaRocque and Mike Wead, each pounding bass line from Pontus Egberg, and every thunderous drum hit from Matt Thompson.  The setlist included a couplle tracks from King's other band Mercyful Fate and covered a lot of territory from his own catalog.  Setlist: Intro - The Candle - Sleepless Nights - Eye Of The Witch - Welcome Home - Medley (Tea - Digging Graves - A Visit From The Dead) - Evil - Come To The Sabbath - The Family Ghost - 7th Day Of July 1777 - Black Horseman - Insanity (Outro)