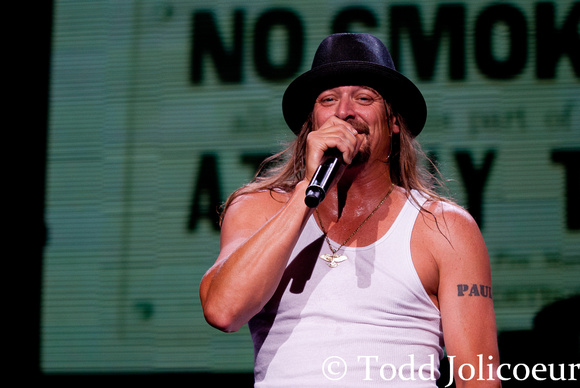 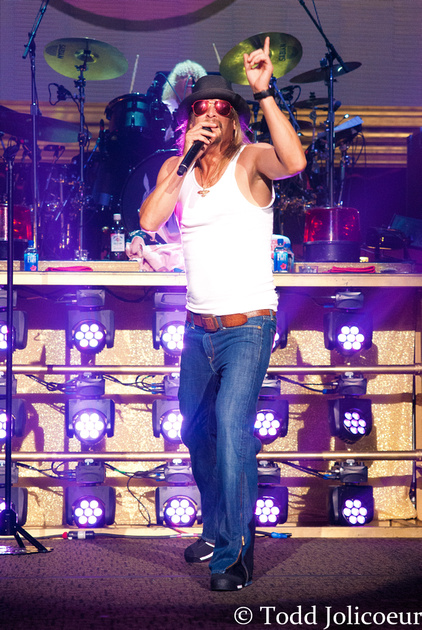 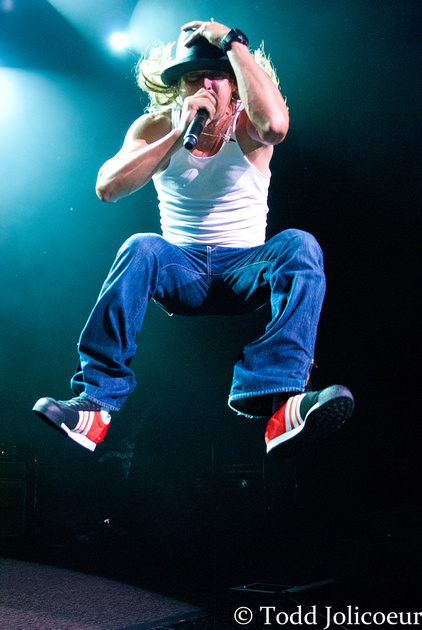 Say what you will about Kid Rock - the man knows how to throw a party, and this summer's tour is one hell of a party... one for the books (record books that is).  Taking to the road "All Summer Long" on his First Kiss, Cheap Date tour, Rock brought back his $20 ticket and other reduced price items (merch, food, Bad Ass beer, etc.) for his fans to enjoy.  This crazy Wednesday evening in Clarkston, MI - just outside Detroit - was another night in a long string of sold out dates Kid is playing at DTE Energy Music Theatre.  Filling the stage with a more than competent band and packing a setlist with hits and gems from his long career is exactly what the capacity crowd was expecting.  The first two tracks were pulled from his latest release, First Kiss, including the set opener and disc title track, which got the crowd on their feet - and kept them there.  After  the two new tunes, Rock addressed the crowd and even explained why he dropped the new songs first... to avoid everyone leaving to grab a beer when he broke out the new material.  Ramping the crowd up even further, he pulled fan favorite "You Never Met A Motherfucker Quite Like Me" and did what he does best - entertain.  Without slowing down or stopping, he threw in a cool version of "American Bad Ass" that has metal guitars and attitude to match. 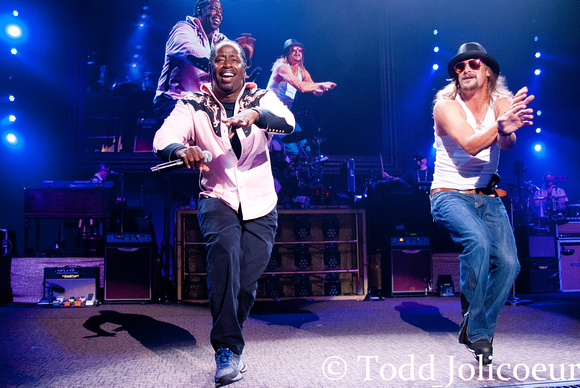 Swirling in a few other tracks, both new and old, Rock kept the crowd engaged and interested with favorites "Devil Without A Cause" and "Cowboy," while tipping his hat once again to new stuff "Johnny Cash" and "Wasting Time."  What came next was a whirlwind of material that demonstrated not only the strength of his song writing, but also the way his band can meld different sounds, styles, and moods into a cool medley that blended no less than seven killer tracks that come from different periods in his career.  One of the biggest cheers from the crowd, other than when the lights first went out in the amphitheatre, was when the first strands of "All Summer Long" shot from the sound system and washed across the crowd.  A gem culled for the show was "3 Sheets To The Wind" from one of Rock's earliest releases, The Polyfuze Method.  This song, while different than most of the performers newer material, fit well within the confines of this Wednesday night hill party.  One of my favorites, "Rock N Roll Jesus" helped inch the show towards its end, with arguably his biggest fan favorite, "Bawitdaba" closed the show with all of the attitude and fun of a true Kid Rock concert.  If you get a chance, get out there before the summer shuts the door on this tour and all of the cool mayhem that comes with it! 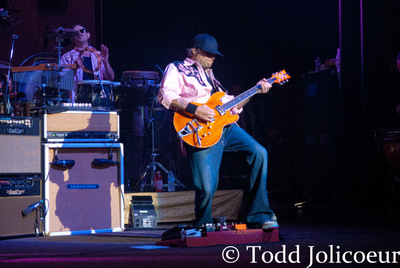