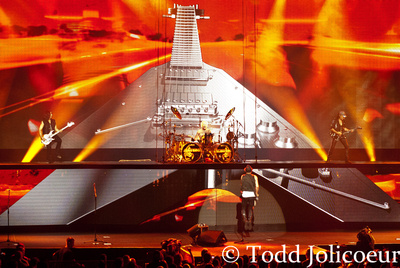 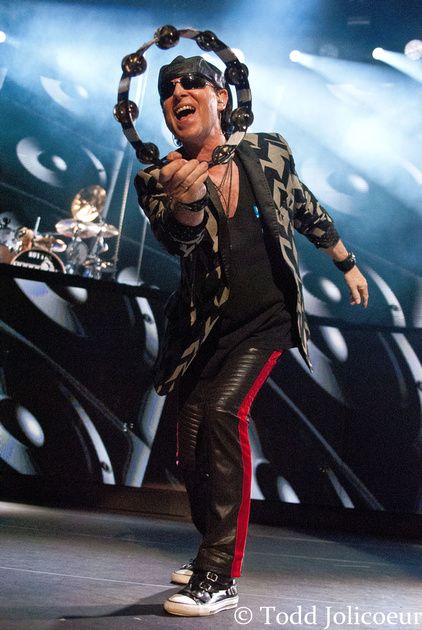 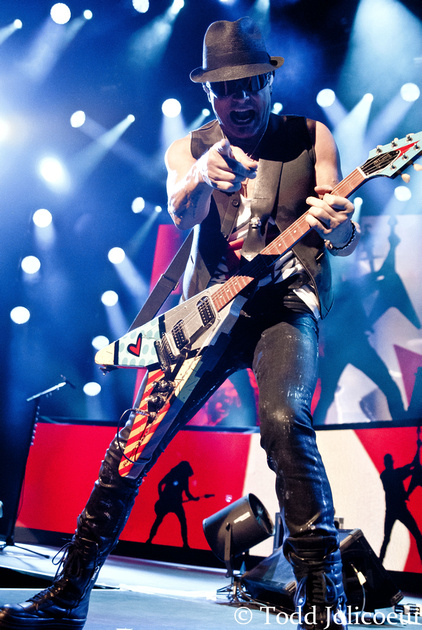 The Scorpions are one of those bands that I have loved forever and the timing has never lined up for me to see a show, but this time around - as the band is touring to support their 50th Anniversary and new release, Return To Forever - I wasn't going to miss out on their swing near the Detroit area, as they stopped at The Colosseum at Caesar's Windsor.  Once inside Caesar’s, there was a buzz that could not be denied as fans hustled to and from picking up their swag and merchandise before taking their seats in the packed venue and waiting to get stung with some classic heavy metal and classic rock venom from the legends that were here to please and tease. 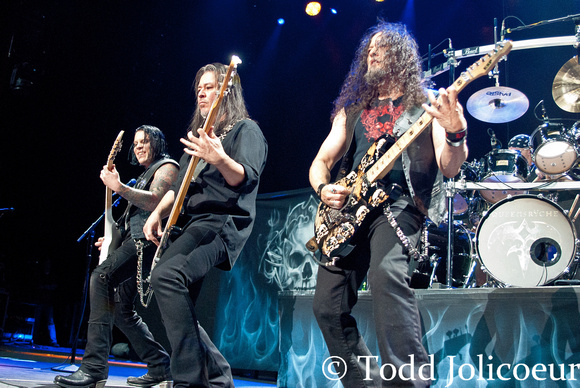 Queensrÿche took the stage with the powerful instrumental "Anarchy-X," and there was no looking back.  The core group of Scott Rockenfeld, Eddie Jackson, and Michael Wilton brought new life to some of the bands classics, while vocalist Todd LaTorre and guitarist Parker Lundgren throwing themselves into the fray.  As classic after classic rolled from the sound system and across the audience, the power of the Rÿche was unmistakable and was a force to be reckoned with tonight.  LaTorre dominated the crowd with his delivery on other classics like "The Needle Lies" and "Walk In The Shadows" all while the twin guitar attack from Wilton and Lundgren supplied the sounds any QR fan was looking for tonight.  "Jet City Woman" and "Eyes Of A Stranger" demonstrated how tight the rhythm section of drummer Rockenfeld and bassist Jackson are and how in sync their timing is as they anchored the show.  Dropping a new track, "Arrow Of Time," in the middle of the set, the guys flexed their muscles and demonstrated they still had that classic sound and feel, regardless of the passage of time.  Closing the show with a killer rendition of "Empire" and one of the tracks that started it all, "Queen Of The Reich," these guys delivered a rocking set that brought the crowd to their feet.

After the great set from the openers, the crowds anticipation was noticeably increasing from minute to minute until the time the Scorpions were to take the stage.  The capacity crowd was humming with electricity that rivaled the sound system that was playing rock classics while the set was changed over and the kabuki was draped across the front of the stage.  Bucking the norm and doing things their own way, the Scorpions took their places behind the curtain and kicked off a killer show with their new releases  opening track, "Going Out With A Bang," and they didn't look back from there.  There were more treats from the new disc, including "We Built This House," a snippet of "Eye Of The Storm," and the catchy "Rock 'N' Roll Band."  While constantly aware of their legacy, the band - led by the dual guitars of Rudolf Schenker and Matthias Jabs - cultivated a setlist that included lesser known hits from their 1970's releases, including a powerhouse medley that featured once track from each release between 1974 and 1977: "Top Of The Bill" from In Trance, "Steamrock Fever" from Taken By Force, "Speedy's Coming" from Fly To The Rainbow, and "Catch Your Train" from Virgin Killer.  The 1980's were important to the genesis of the Scorpions powerhouse sound and this was evident with the back-to-back renditions of "Make It Real" and "The Zoo," both from 1980's Animal Magnetism.  Front man and lead singer Klaus Meine sounded as good on the newer material as he did on the classic tracks, his voice recalling a the youth of many in the crowd.  Constantly referring to Canada and tonight's appearance, Meine explained the band used to ride in a van to gigs in Germany and discuss touring the world, including Canada.  Pulling ahead a decade to 1990 and the multi-platinum release Crazy World, the band doubled the pleasure from this disc with two ballads, "Send Me An Angel" and "Wind Of Change," eliciting applause from the front of the crowd to the back.  Watching all four guys that weren't jammed behind a drum set come together on their stringed instruments during 1979's "Coast To Coast" (from the Love Drive album), was very cool and not something typically seen at a concert.  While the band blew through more classic tracks such as "Always Somewhere," also from 1979's Love Drive, the rhythm section of drummer James Kottak and bassist Paweł Mąciwoda anchored the sound and tempo of the show, keeping the classic sound and feel of the band.  Arguably the bands biggest discs, 1982's Blackout and 1984's Love At First Sting held down the end of the show with powerhouse tracks "Blackout" and "No One Like You" from the former and the latter providing the final three tracks of the night, "Big City Nights," "Still Loving You," and "Rock You Like A Hurricane" closing the show with a one-two-three punch that is unrivaled these days by any band.  I didn't hear a single fan mutter anything but great feedback as they left the show, hoping to see these icons one more time... just as I am hoping. 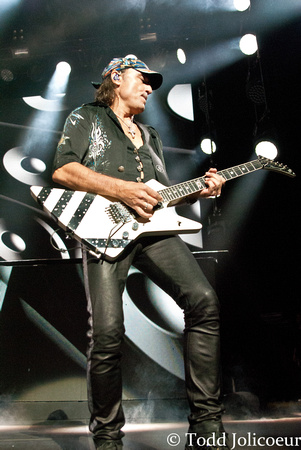 Setlist: Going Out With A Bang - Make It Real - The Zoo - Coast to Coast - Top Of The Bill / Steamrock Fever / Speedy's Coming / Catch Your Train - We Built This House - Delicate Dance - Always Somewhere / Eye Of The Storm / Send Me An Angel - Wind Of Change - Rock 'N' Roll Band - Dynamite - In The Line Of Fire - Blackout - No One Like You - Big City Nights - Still Loving You - Rock You Like A Hurricane

Setlist: Anarchy-X - The Needle Lies - Walk In The Shadows - Jet City Woman - Arrow Of Time - Eyes Of A Stranger - Empire - Queen Of The Reich