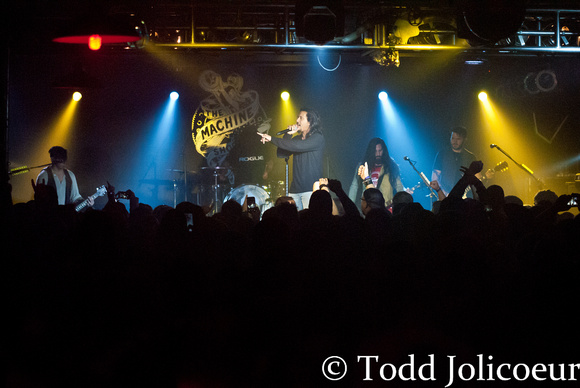 The final of three SOLD OUT shows at The Machine Shop in Flint, MI from Pop Evil was one not to be missed.  Originally the second show booked (with a third becoming the first night of the 3-day stand), this Saturday night concert was packed to the rafters with fans of the band from the west side of the state.  Many of the fans in attendance in the house for the third night in a row, while others were catching a second show, and others yet dropping in to see Pop Evil for their first time... and they would not be disappointed.  After great sets from Detroit rockers Citizen Zero and openers Westfall, front man Leigh Kakaty and the rest of Pop Evil, took to the stage and delivered a set full of fan favorites and other great tracks from their catalog.  Once the lights hit and the first notes were played, it was hard to tell who was more amped up for the show - the band or the audience.  Bassist Matt DiRito covered almost every square inch of stage roaming from the minute he hit the stage until he left it at the end of the show, flashing smiles and having a blast playing his ass off for the crowd that came out tonight.  Songs from the bands latest disc Up helped make up the setlist, mixing in and finding their place comfortably alongside other songs that have become fan favorites over the years.  Guitarists Dave Grahs and Nick Fuelling filled the monitors and speakers with chugging riffs, soaring solos, and some of the best twin-guitar sound pumped through the Machine Shops sound system.  Even Leigh took his turn picking up a guitar and adding his guitar work to the mix during the set.  The fans couldn't get enough, as song after song poured through the venue and kept people singing, rocking out, and having a great time.  The timekeeper behind the kit, Chachi Riot, is as bombastic a drummer as you will find on stage these days - with his arms and hair constantly moving about behind the kit as he pounds the kit with everything he has.  We know as the bands trajectory heads upward and onward that their days of traveling to The Shop may be numbered, but for these three nights, Pop Evil ruled the Flint, MI venue and holds the record for most consecutive sellouts at the concert lounge.