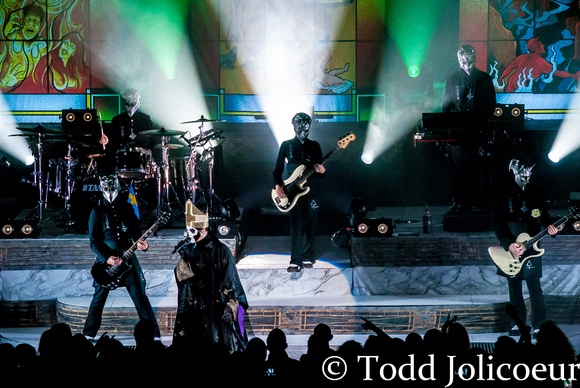 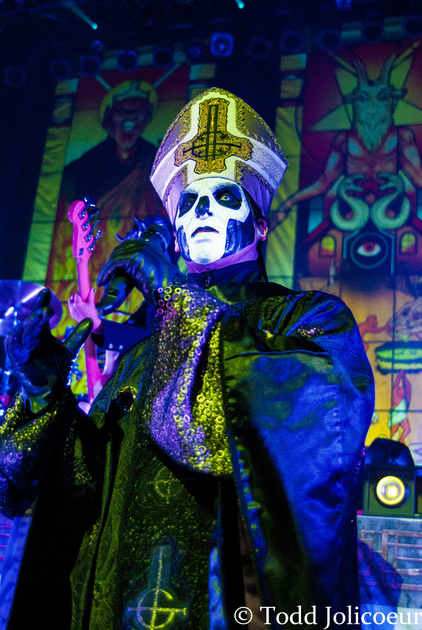 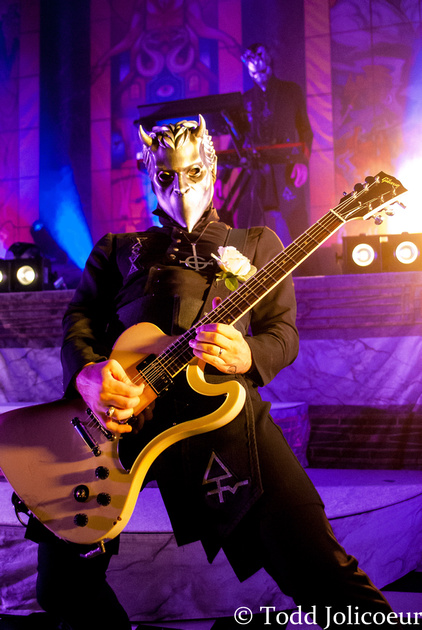 Ghost is out touring the US behind their latest EP, Popestar and luckily Detroit was in the bands sights when they set up the tour routing.  As the moments drew near for Papa Emeritus III and the Nameless Ghouls to take the stage, you could feel the anticipation and excitement in the air.  With music that was ominous and uplifting at the same time being piped through the venues sound system, the minutes ticked off until the lights went out and the band took their spots on stage in the dark.  Opening with the new single from the EP - "Square Hammer" - the band set the tone for the evening... expect the unexpected.  Mixing up the rest of the setlist mostly from the bands last two full-length efforts with a couple selections from the band’s debut release tossed in, there was something for everybody to enjoy.  Jumping with both feet into "From The Pinnacle To The Pit," Papa and the Ghouls seemed to be firing on all cylinders, whether trading guitar solos, pounding a perfect tempo out on the drums, or laying thunderous bass lines that anchored the song and every track that followed, including a killer live version of "Secular Haze" from the Infestissumam disc and a one-two punch of "Stand By Him" and "Con Clavi Con Dio" from the band’s debut release.  Peppering the show with some introductions and cheering, Papa led tonight's ritual from song to song and kept the congregation engaged.  Not a front man to take the spotlight and accolades, Emeritus III was constantly moving from side to side around the stage to solicit appreciation for the nameless ghouls as they ripped through solos and leads.  With a light show that enhanced the listening experience, this is a killer spectacle to behold from the music to the stage presence of the band.  Working through the setlist, the remainder of the show was heavily impacted by the Last full-length Meliora and the previously mentioned Infestissumam.  The former provided a string of tracks such as "Devil Church," "Cirice," the mellow "He Is," and the rocker "Absolution."  Taking the show into heavy territory, the band ripped through a great version of "Mummy Dust" complete with confetti and Ghost money.  One last track from the Opus Eponymous release, "Ritual" hit the set list and was the final track of the evening before the encore of "Monstrance Clock."  There was the inclusion of the Sisters of Sin before "Body And Blood," along with dialogue from Papa.  Another musical highlight of the show was "Year Zero" from the sophomore disc, as well as a couple more tracks from that same release.  If you get the chance to see Ghost on this swing, be sure to grab your ticket.  With a new disc projected for 2017, this may be the last tour with Papa Emeritus III before he is succeeded just as his predecessors were with each new release. 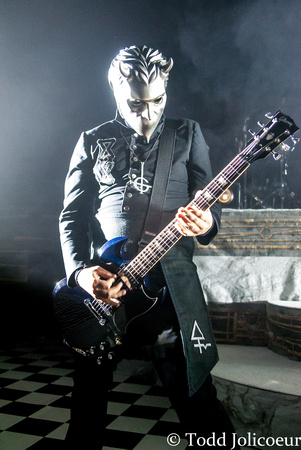