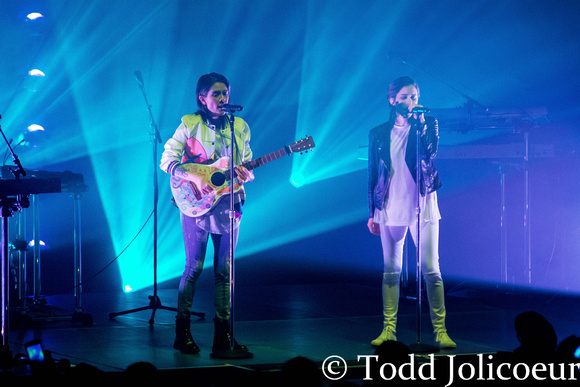 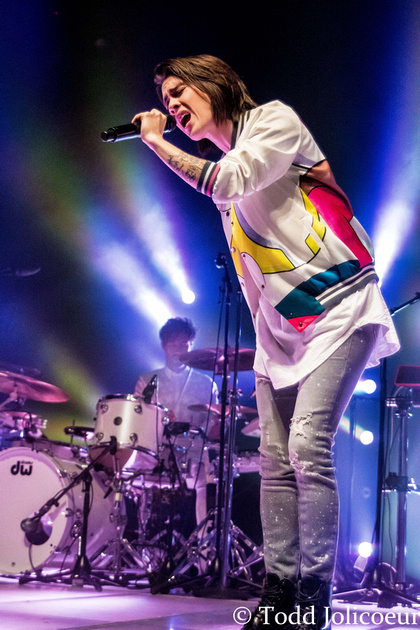 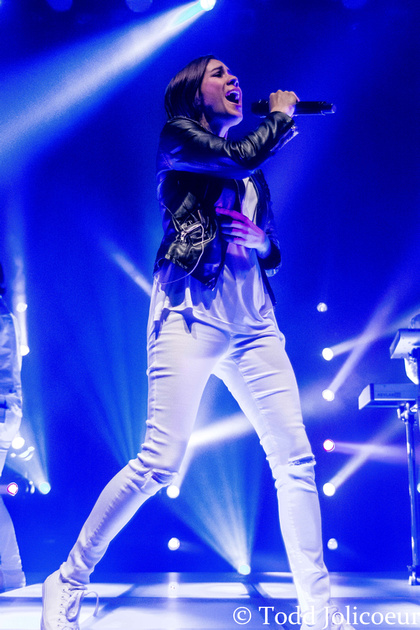 With a new disc, Love You To Death, to promote, sisters Tegan and Sara are out on the road, performing hits new and old, as well as the occasional fan favorite.  On a rainy chilly evening just north of Detroit, the pair and their band landed at the Royal Oak Music Theatre and the crowd that packed the venue was so happy they did.  After a set from Torres, the stage was changed over and Tegan and Sara, along with their tour mates, took their respective place on stage and away we went.  Grabbing a track from 2007's The Con to start the show, the sisters set the pace with "Back in Your Head."  Throughout the show, Tegan and Sara traded off lead vocals as well as harmonies and keyboard play.  While guitars were used minimally, the show didn't lose anything over past tours.  Three of the albums from the groups catalog were heavily represented, including the 2013 release Heartthrob which contributed the next two tracks of the evening - "I Couldn't Be Your Friend" and "How Come You Don't Want Me."  Listening to the two banter not only with the crowd but each other adds depth and fun to the performance.  Also from Heartthrob were "Drove Me Wild" and a favorite of mine, "Goodbye, Goodbye" which seemed to engage a lot of the audience.  Unsealing music from the new disc, Tegan and Sara tore into "Faint of Heart" and "White Knuckles" which have a slightly more dance or electronic sound than a lot of the bands older material, but it fits perfectly within the scope of what these girls so - and do well.  After two more tracks from 2013 including "Shock to Your System," the pair went back to 2009 and the Sainthood release with "Alligator" and "Northshore" which seemed to energize the crowd and band alike.  The tracks seemed to have a slightly different edge to them thanks to the less is more approach to the band and the live instrumentation on this tour.  Shifting to acoustic for a couple tracks, the band returned to the The Con for the title track and others like "Call It Off," "I Was Married," and "Nineteen."  Other than a huge single from 2013 "Closer," most of the remainder of the show was new tracks that showed the growth of Tegan and Sara musically and lyrically, as well as the ability they have to take their music in a slightly different direction.  Although relatively new, the crowd (this reviewer included) sang along on fresh tracks like "BWU" and "Boyfriend" before the encore hit with two more new songs, when "100x" and "Stop Desire" were two of the final three songs of the evening.  If you aren't familiar with Tegan and Sara, you are missing out - if you are familiar and dig them, get some friends, some tickets, and go enjoy a fun night out when they come through your town.