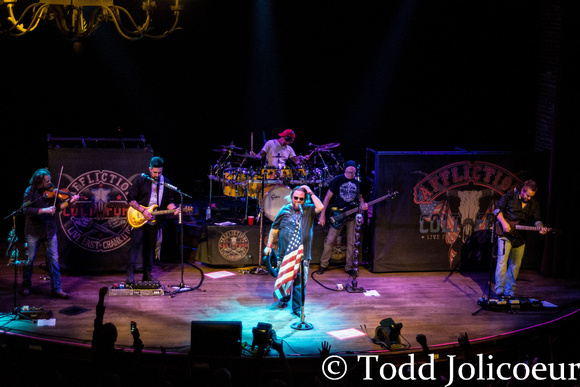 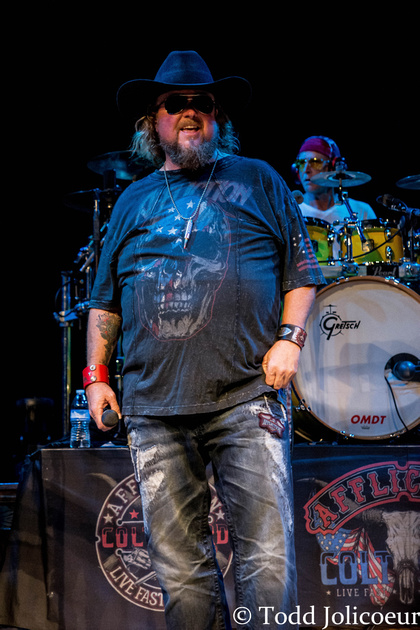 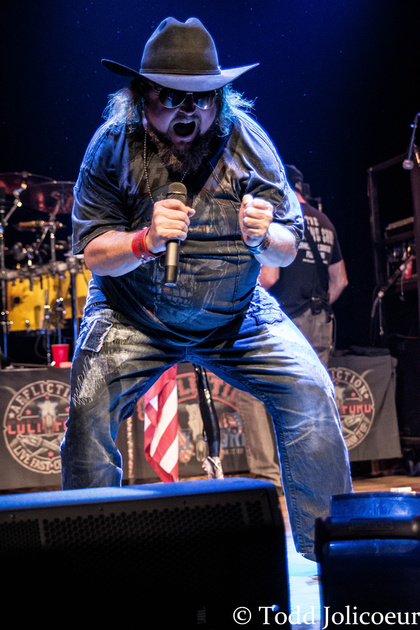 As Colt Ford and his band rolled into Lexington, MI for a show at the Lexington Village Theatre, I knew what to expect as I have been witness to these guys and their all-out performance more than once - and I was excited at the prospect of seeing them once again.  As the time came for Colt along with his cast of players - Justin David, Paul Chapman, Spanky Dynamite, Tim Haines, and Cole Phillips - to hit the stage, the party vibe was already filling the air.  Armed with a setlist of hits from throughout the singer’s career, up to and including the latest single from his upcoming album, Ford was ready to rock this country crowd as only he can.  From song to song, the flow of the set was controlled by Colt from behind the mic, but the tempo was controlled by the tight rhythm section of Paul Chapman on bass and Tim Haines on drums.  Songs like "Back" and "Drivin' Around Song" may have been recorded with other country artists, but listening to them live you would never know, as Colt and his other vocalists on stage handled each track perfectly.  With a twin guitar attack of Spanky Dynamite and Cole Phillips flanking the singer, we were constantly treated to cool riffs and solos, with each guy taking his share of time in the spotlight near the front of the stage.  Mid set, Colt and his band paid tribute to the Armed Forces and America in general with the one-two punch of "Workin' On" and "America," with several mentions that a download of the former would generate donations to the Lone Survivor Foundation for wounded veterans and their families.  Multi-instrumentalist Justin David wowed the crowd with fiddle, banjo, acoustic guitars, and his vocals throughout the show demonstrating how well-rounded this band is collectively.  While songs like "Chicken And Biscuits" and "Dirty Side" revved the audience up, Ford's latest single "4 Lane Gone," while lesser known was well received by the crowd.  A real bonus to the evening was a killer close to the set with "No Trash In My Trailer" and "Washed In The Mud" which got everybody up, dancing, singing, and having an all-around good time.  The band left the stage, but was soon whisked back out by a crowd that wasn't ready to go home.  Eminem's "Lose Yourself" was a fitting opening to the encore for a Michigan crowd and led perfectly into the final song of the night, "Dirt Road Anthem."  As I have said a million times, if you hear the name Colt Ford and wonder what the buzz is all about, you obviously haven't seen him perform - this is truly a show to be seen to understand.  Do yourself a favor and keep an eye out for him to hit your town. 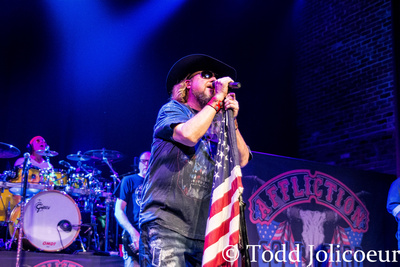 Setlist: Mr Goodtime - Answer To No One - The High Life - Crank It Up - Back - Country Thang - Drivin' Around Song - Waste Some Time / Crickets / Huntin' The World / This Is Our Song - Workin' On - America - Ride Through The Country - She's Like - 4 Lane Gone - Chicken And Biscuits - Dirty Side - Lucky - No Trash In My Trailer - Washed In The Mud - Lose Yourself - Dirt Road Anthem