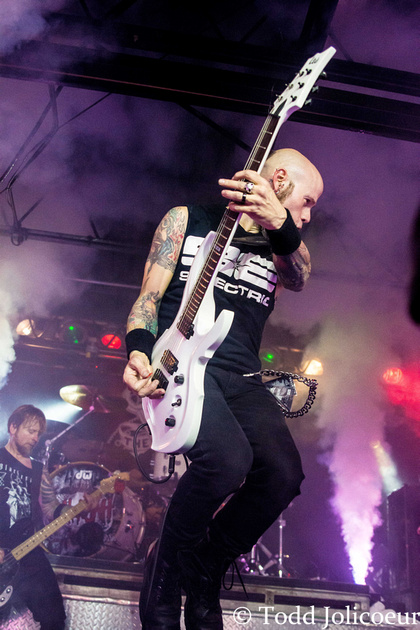 Drowning Pool will ALWAYS hold a special place in my Rock N Roll heart.  Not only did I dig their debut release from the minute I heard it, but I was able to witness the spectacle that was Drowning Pool on Ozzfest in Detroit... one of Dave Williams' final performances.  After that, I was asked to do an interview for a friends website and jumped at the opportunity.  Weeks later when the band was touring and playing locally, I received an email letting me know tickets we waiting for me.  Bonus-  I got the opportunity to meet the guys and this was the first show I ever shot.  Fast forward six years and I am once again in front of this metal foursome and ready to rock at one of my favorite venues, Flint, MI's Machine Shop.  After a great set from Gemini Syndrome, we all waited anxiously for the Texas band to hit the stage and deliver their hits as well as a couple gems from their latest release, Hellelujah.  Core band members Mike Luce on drums and Stevie Benton on bass anchored the bands set with a pounding bottom end that was tight from open to close and guitarist C.J. Pierce kept the flow of the show intact with his riffs and solos.  Singer Jasen Moreno kept the crowd engaged and the energy up, singing songs that we familiar to everyone in attendance.  While they peppered the setlist with tracks from various releases, it was the classic songs from the debut that got the fists in the air and voices raised throughout the venue.  With song after song building the show up, the evening culminated with members of each of the supporting bands joinging these metal mongers on stage fro arguably their biggest hit, "Bodies."  This track packed the final punch in a knockout of a show that left no fan unsatisfied.  I cannot wait to hear what these guys do next ,let alone witness it live... 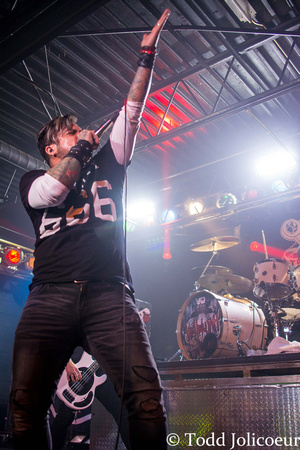