Armed with Pink Floyd's catalog and a killer light show, Brit Floyd brought The World's Greatest Pink Floyd Show to Toledo, OH's Huntington Center and the crowd was as ready for a night of classic music and a stage show to rival any around today.  Traveling with six musicians on stage as well as three vocalists, this show is a  must see for fans of Pink Floyd and its legacy.  From the minute patrons entered the venue, they were treated to an ethereal montage of video and sounds that carried the Floyd vibe and kept you engaged while waiting for the main act. 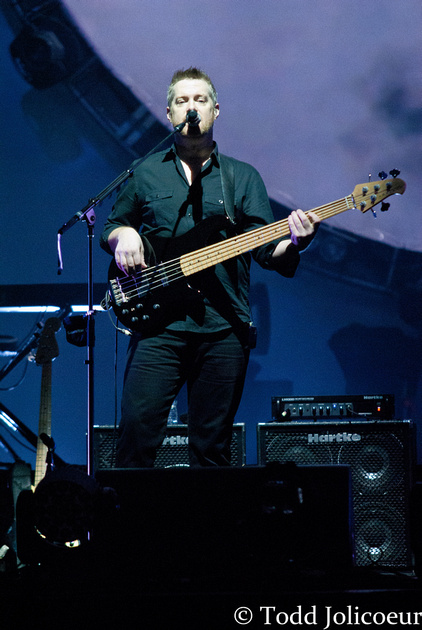 Musical director, guitarist, and vocalist Damian Darlington leads the charge on stage with a killer collection of artists that work with precision to deliver a killer musical tribute to Pink Floyd, as well as the visual and atmospheric nuances associated with Floyd.  From the first notes of "Signs Of Life" on through to the final sounds of "Run Like Hell," these performers did exactly that - performed.  Ian Cattell (bass / vocals) and Edo Scordo (guitar / vocals) join Darlington stage front, handling the lead vocals between them.  Anchoring the rhythm section from the back area of the stage this evening was Arran Ahmun behind the drums.  As the band moved through the various Floyd classics, the light show accentuated the power and delivery of the music, with great transitions and colors.  Near the front of the stage was a trio of beautiful voices - Angela Cervantes, Jacquie Williams, and Ola Bienkowska - that added depth to the vocal sound on nearly every track.  Several songs were ambitious versions of the originals, including the highly acclaimed "Echoes" from the album Meddle that opened the second set.  Other tracks performed this evening were culled from such classic albums as The Dark Side of the Moon, Wish You Were Here, Animals, The Wall and The Division Bell.  Adding their talent to the show musically was Tom Ashbrook on keyboards and multi-instrumentalist Jay Davidson on percussion, keyboards, and saxophones.  One of the highlights in my opinion was Brit Floyd's rendition of Shine On You Crazy Diamond.  In my opinion, the music, vocals, video, and lights all came together perfectly and created one of the evening's "shining" moments.  Set closer "Comfortably Numb" energized the crowd as fans and band alike prepared for an awesome one-two punch of "Wish You Were Here" and "Run Like Hell" for the encore.  If you dig Pink Floyd, do not miss this show.  If you want to relive the music as it was originally performed, sit back and close your eyes... but keep in mind, you are going to miss a great light, video, and stage show if you do!

Setlist: Signs Of Life - Learning To Fly - High Hopes - Shine On You Crazy Diamond - Poles Apart - Us And Them - The Happiest Days Of Our Lives - Another Brick In The Wall, Part 2 - Echoes - Sorrow - Empty Spaces - Young Lust - Time - The Great Gig In The Sky - Money - One Of These Days - Comfortably Numb - Wish You Were Here - Run Like Hell