Arguably the biggest artist in Country music over the last few years is Luke Bryan.  Hitting different markets in advance of his huge stadium tour later this summer, Luke Bryan is traversing the country with Little Big Town and Dustin Lynch along for the ride.  This monster tour decided to throw a tour stop in Toledo on the agenda.  This stop created a ticket frenzy, as the show SOLD OUT in 30 seconds when it went on sale.  As the doors opened and the crowd filed into the venue, there was excitement and anticipation from every angle... 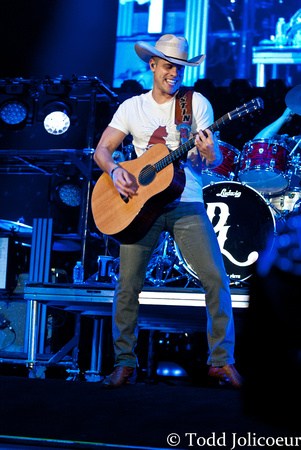 Dustin Lynch, out supporting his latest release 2014's Where It's At, opened the show and the crowd couldn't get enough of him.  The singing, the smiling, and the all-around positive vibe seemed to wash over the audience from the minute is band hit the stage until the lights came on after his short set.  Lynch played his hits, including closing his set with the Top 10 single "Hell Of A Night," and seemed to enjoy each moment on stage.  His smile was contagious and seemed to be passed from him to the audience.  Watch out for this guy, we will be hearing and seeing a lot from him in the years to come. Little Big Town filled the middle slot of this tour, and they did so with authority.  From the acapella version of "Jolene" opening the show through their big hits including the three singles from their latest disc, the band controlled the stage and drew the audience in a little closer with every song.  The energy grew through the first couple tracks and the venue seemed to explode as the mandolin opening of Pontoon kicked in and the energy never subsided after that.  The groups take on Fleetwood Mac's The Chain was killer and had fans young and older singing in unison while we anxiously awaited some of the bands fan favorites near the end of their set.  "Day Drinking" elicited big vocals from the crowd as the band worked together to create a party atmosphere while setting the scene for the recent hit "Girl Crush."  The live version was phenomenal and delivered emotionally, as every woman in the venue seemed to connect while they joined together and belted out this once from their seats.  As the band closed out their show with "Boondocks" we were all aware of the reason they have had the success they have and that it isn't going to end any time soon. ACM and CMA Entertainer of the Year for 2015 is riding the wave from his latest release 2015's Kill The Lights, touring the country on a bill of the same name.  The tour is selling out large venues, stadiums, and arenas across the US, including the tour's recent SOLD OUT stop in Toledo, OH at Huntington Center on a cool April Thursday night.  As the stage conversion from Little Big Town to Luke was completed, the anticipation in the venue was at peak and the excitement and buzz that emanated from the crowd was more than I have experienced at a live show in a while.  They killed the house lights and soon the show was off and running as Luke hit the stage with "Rain Is A Good Thing," the lone track from his 2009 release Doin' My Thing.  Soon he shifted gears into a newer track with "Kick The Dust Up" from his latest disc.  "Kiss Tomorrow Goodbye" completed the trilogy of opening tracks that set the stage for the rest of the show.  Not one to rest on his laurels, Bryan and band played tracks from all five of Luke's studio releases, leaning heavily on the last three discs.  With the latest collection kicking in five songs, including the hit and duet with Little Big Town's Karen Fairchild, "Home Alone Tonight."  Closing out the other tracks from the 2015 release, Bryan treated the audience to "Move," "Strip It Down," and "Huntin', Fishin', and Lovin' Every Day."  Crash My Party which was released in 2013 was the source of six of tonight's tracks, including the title track, "That's My Kind Of Night," "Drink A Beer," and "Play It Again."  The audience ate up each song along with the smile that seemed to never leave Luke's face.  Not forgetting his beginnings, Luke tossed in a couple tracks from his 2007 debut I'll Stay Me, including my personal favorite, "All My Friends Say."  Tipping his hat to the disc that seemed to break things wide open for him, Bryan played four songs, including both songs in the encore, from 2011's Tailgates & Tanlines.  The encore of "Country Girl (Shake It For Me)" and "I Don't Want This Night To End" is the perfect one-two punch to close out his show and leave everybody with the feeling of satisfaction as they leave the venue. 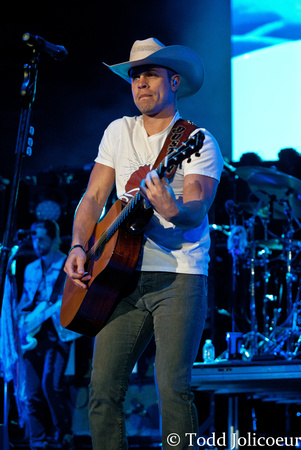