NEWS: Dolly Parton's Coat of Many Colors: Experience The Magic On DVD May 3 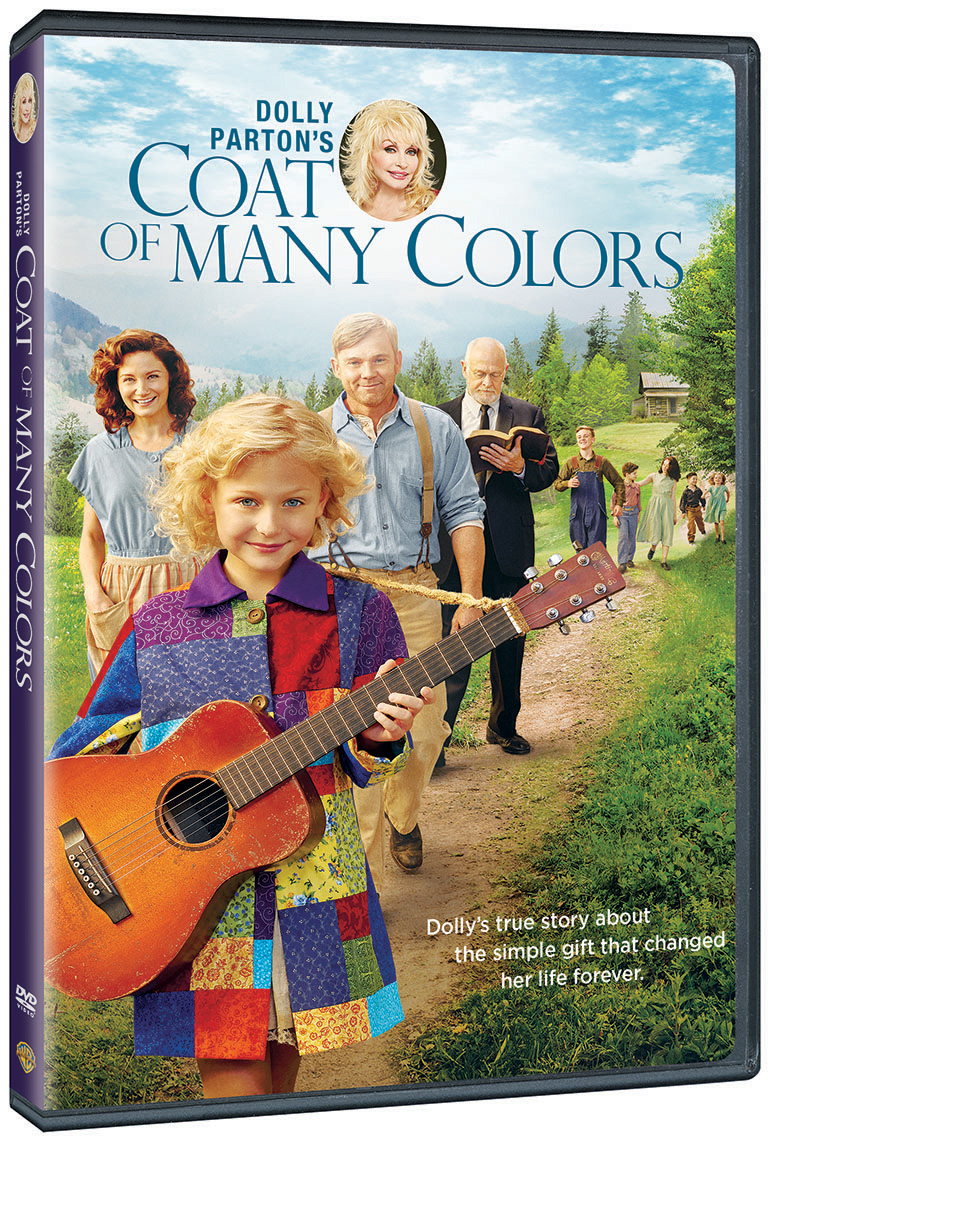 NASHVILLE, Tenn. (April 29, 2016) – Just in time for Mother's Day, Warner Bros. Home Entertainment will release the critically acclaimed film Dolly Parton's Coat of Many Colors on DVD for the first time on May 3, 2016. Experience the magic and warmth of the television movie event that is based on the inspiring true story of living legend Dolly Parton's remarkable upbringing in rural Tennessee. In support of the DVD release, Dolly will head out on the promotional trail and appear on Access Hollywood on April 30th, CMT After Midnite on April 30th and CMT’s Hot Twenty Countdown on April 30th and May 1st, CBS This Morning and Yahoo TV on May 2nd, CMT Radio Live on May 2nd, Entertainment Tonight Canada on May 3rd, GAC’s Great American Playlist on May 3rd and May 12th, CBS This Morning on May 5th, CBN’s 700 Club on May 6th, PBS’s Metro Focus on May 5th and May 8th with additional features with Parade, People Magazine, Huffington Post, Fox411, Rolling Stone Country and more.

“It is my true belief that if you're lucky enough to have a good mother, that is the greatest gift that you will ever know,” said Dolly. “So many people responded to my Mother in the "Coat of Many Colors" movie not only because of the wonderful job that Jennifer Nettles did portraying her, but the love and attention that Mama gave to all of her children.”

To date, the initial broadcast of Dolly Parton's Coat of Many Colors has delivered 15.9M total viewers (Live+7), becoming the #1 movie on broadcast with total viewers in more than 6 years.* Furthermore, Dolly Parton’s Coat of Many Colors has the highest total viewer L+SD to L+3 increase (2.548 M) ever!** The family-oriented faith-based movie stars Jennifer Nettles (award-winning singer/songwriter and lead vocalist of the duo Sugarland), Ricky Schroder (NYPD Blue, The Lost Battalion, 24), Gerald McRaney (Agent X, Mike & Molly, Longmire, House of Cards), and Alyvia Alyn Lind (Transparent, Revenge, Blended). Dolly Parton introduces the film and serves as narrator. Dolly Parton's Coat of Many Colorsalso contains an alternate version of the movie, deleted scenes and heartwarming extras. The DVD is priced to own at $19.98 SRP.

This once-in-a-lifetime special takes place inside the tight-knit Parton family as they struggle to overcome a devastating tragedy and discover the healing power of love, faith and a raggedy patchwork coat — vividly described in the well-known song of the film's title — that helped make Parton who she is today. Set in the Tennessee Great Smoky Mountains in 1955, this poignant and uplifting family-friendly story follows the incidents in Dolly and her family's life around the time she was nine years old.

Dolly Parton's Coat of Many Colors is executive produced by Dolly Parton, Sam Haskell and Pamela K. Long. Written by Long, the film was directed by Stephen Herek. Hudson Hickman served as line producer and Velton Ray Bunch and Mark Leggett composed the musical score. The film is a production of Magnolia Hill Productions and DP Productions in association with Warner Bros. Television.Dolly Parton's Coat of Many Colors first premiered on December 10, 2015, on NBC.

ABOUT DOLLY PARTON: An internationally renowned superstar, the iconic and irrepressible Dolly Parton has contributed countless treasures to the world of entertainment. All-inclusive sales of singles, albums, hits collections, paid digital downloads and compilation usage during her illustrious career have topped a staggering 100 million records worldwide. Achieving 25 RIAA certified gold, platinum and multi-platinum awards, Dolly has had 25 songs reach No. 1 on the Billboard Country charts, a record for a female artist. Dolly has garnered 7 Grammy Awards, 10 Country Music Association Awards, 5 Academy of Country Music Awards, 3 American Music Awards and is one of only five female artists to win the Country Music Association’s Entertainer of the Year Award. Making her film debut in the 1980 hit comedy “9 to 5,” Dolly earned rave reviews for her performance and an Oscar nomination for writing the title tune, along with her second and third Grammy Awards. Roles in “Steel Magnolias,” “Best Little Whorehouse in Texas,” “Rhinestone,” and “Straight Talk” followed. Dolly saw a cherished dream become a reality in 1986 with the opening of her own theme park, Dollywood, in Pigeon Forge, Tennessee. In 1988, Dolly began the Dollywood Foundation which funds Dolly Parton’s Imagination Library across America and in Canada by giving every preschool child a book each month from the time he or she is born until the child reaches kindergarten. Currently 60,000,000 books are mailed to children in the US, Canada and throughout the UK. In 1999, Dolly was inducted as a member of the Country Music Hall of Fame. She has her own star on the Hollywood Walk of Fame and in 2004, the U.S. Library of Congress presented her with their Living Legend Award for her contribution to the cultural heritage of the United States. In December 2015, more than 15.9 million tuned into “Dolly Parton’s Coat of Many Colors” and was the most-watched film on broadcast networks since May 2012. To learn more about this American icon, visit DollyPartonEntertainment.com.