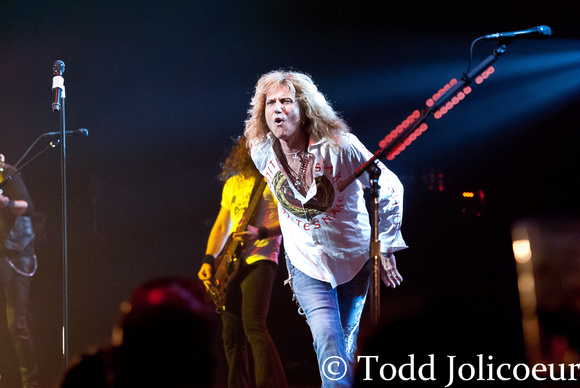 David Coverdale has seemingly done it all during his lengthy rock and roll career - and the Whitesnake chapter received an appropriate nod when he announced the Whitesnake Greatest Hits tour.  Some may argue the which 'Snake songs are greatest hits in their opinion, but judging by the setlist, it is hard to argue with tonight's performance as a well-rounded view of the bands catalog from a 'hits' standpoint.  When you add the reunited Whitford/St. Holmes to the package, you have a killer night of great rock and roll rooted in the blues. 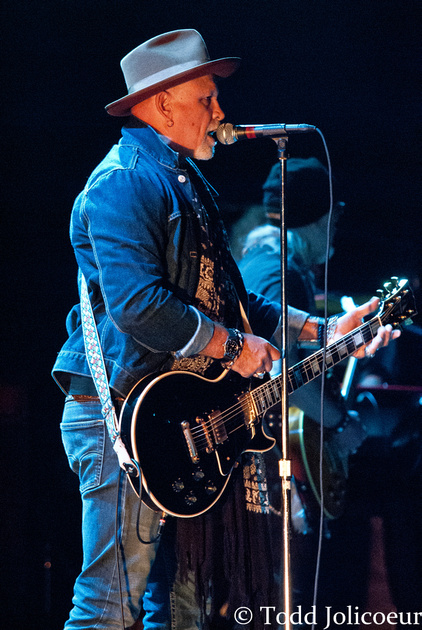 Taking the stage, Whitford/St.Holmes (Brad Whitford and Derek St. Holmes) had the task of warming up the crowd for Whitesnake.  Normally a tall order, when you mention Derek St. Holmes in Detroit, we are all too familiar with the hometown guy and his vocals, thanks to his many tours and recordings with Ted Nugent.  The guys hit the ground running with track off of their latest disc, Reunion.  Ripping through the discs opener "Shapes" to start the set, the band was off and running, playing several of the new releases nine tracks.  While they didn't move around much, the band did play a tight set, with new drummer Brent Fitz behind the kit.  The new material went over well with the crowd and blended well with the tracks they dropped in the set form their 1981 self-titled release.  Closing out their short set with a medley of classics ripped from both of their catalogs from their "day jobs" in Aerosmith and Ted Nugent, they brought the crowd to their feet.  For me the highlight was hearing the live power behind the new tracks and how well the guys demonstrated that rock and roll was still alive and kicking. 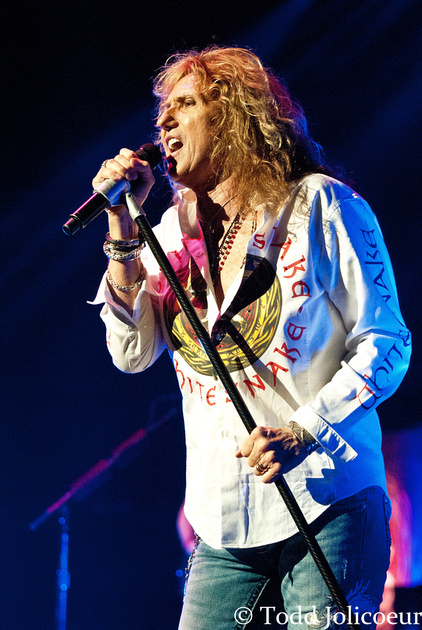 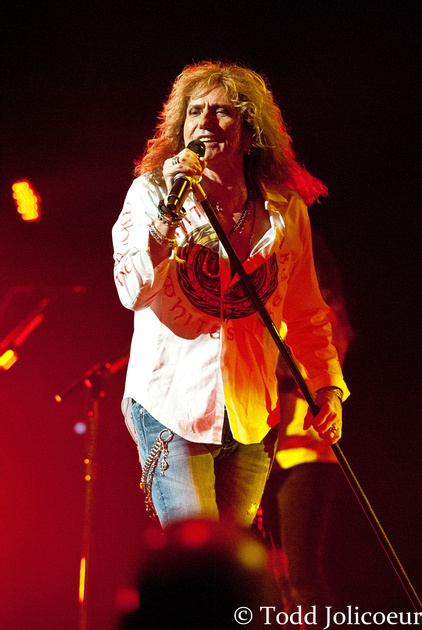 As the stage was cleared after the Whitford/St. Holmes set, the crowd gathered near their seats and the anticipation for what was to come filled the air.  As the lights started to dim while My Generation spilled out of the sound system, the crowd became restless and patiently awaited David Coverdale and Whitesnake.  Kicking things off with "Bad Boys," Coverdale and band tore the lid off of the venue and started a rock and roll show the right way, with killer vocals, great riffs and solos, thunderous drums, and energy that couldn't be contained.  Flanked by two guitarists, Coverdale took no time establishing his position as a great singer and performer as he made his way from left to right and back again across the front of the stage, song after song.  The band dipped into classic Whitesnake territory with the one-two punch of "Slide It In" and "Love Ain't No Stranger."  Guitarists Reb Beach and Joel Hoekstra played song after song, trading licks and solos, with Hoekstra's flashy showmanship and big smile anchored by Beach's solid presence and playing.  The band jumped back to 1989 for the next four tracks including "The Deeper The Love," "Sailing Ships," and the still powerful "Judgement Day."  The fourth was a 1989 re-recording of 1980's "Fool For Your Loving."  In between the songs, there was plenty of time for guitar solos from Beach and Hoekstra, as well as a solo from longtime bassist Michael Devin.  The killer performance of the night was Tommy Aldridge's phenomenal drum solo in the middle of "Crying In The Rain."  It was the first drum solo I had ever seen that kept everybody on their feet - don't want to give any spoilers, but this is not to be missed.  The bands multi-Platinum self-titled album helped close the show, contributing five killer songs and taking the band off the stage and the crowd out of the venue and into the "Still Of The Night."  One of Coverdale's best performances of the night was "Give Me All Your Love," while the crowd went absolutely crazy when the band cruised through "Here I Go Again."  Tonight showcased classic Whitesnake tracks and proved that Coverdale is still one of the best frontmen in rock and roll - hopefully this Greatest Hits tour will lead to more classic tracks from the band, but if nothing else, hopefully at least one more swing through Detroit.  If you want a great night full of killer rock classics and a setlist full of hits, be sure to grab tickets when Whitesnake rolls through your town. 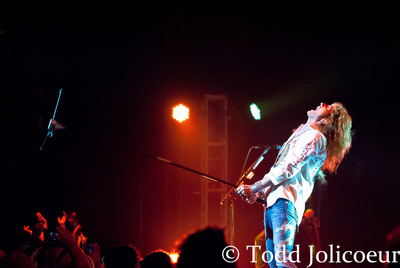 Setlist: Bad Boys - Slide It In - Love Ain't No Stranger - The Deeper The Love - Fool For Your Loving - Sailing Ships - Judgement Day - Slow An' Easy - Crying In The Rain - Is This Love - Give Me All Your Love - Here I Go Again - Still Of The Night 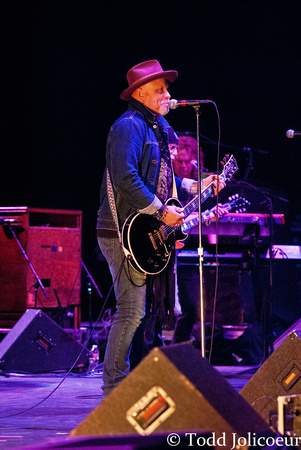