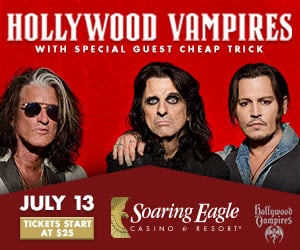 It's gotta be a killer lineup to travel over two hours in the middle of the week to see a show these days.  That killer lineup was indeed in place when the Hollywood Vampires, led by Alice Cooper and Johnny Depp announced a tour stop in Mount Pleasant, MI at the Soaring Eagle Casino. As the show date approached, the show got the added bonus of adding opening band and recent Hall Of Fame inducteees Cheap Trick, who were in Michigan to kick off their summer tour with Heart and Joan Jett the next evening.

Robin, Rick, Tom, and Daxx hit the stage on time and from the opening strands of show opener "Hello There" until the final notes of "Goodnight" rang through the venues sound system, they unleashed hit after hit upon the packed Soaring Eagle crowd.  The hits came one after another - with some of their biggest tracks peppering the show closer to the end, fan favorites dotted the musical landscape during their hour on stage.  Robin's voice hasn't diminished at all, as his vocal range was there with him every step of the way, even when the songs called for higher ranges and octaves.  As expected, the crowd went crazy when tracks made famous by the bands At Budokan release, "Ain't That A Shame," "I Want You To Want Me," and "Surrender" came to life.  Rick Nielsen cruised the stage from left to right constantly, stopping occasionally to jump behind a microphone, but even more frequently to refresh the guitar pick in his hand, as he seemingly tossed out more picks tonight than most artists toss out during a complete tour.  If Bic lighters were still the thing to have in your pocket at a concert (instead of a cellphone), the air would have been filled as the band played through "The Flame."  Every woman in the venue swooned as the foursome played the song to perfection.  Bassist Tom Petersson played his 12-string bass effortlessly from song to song and even took over vocals duties on a cool cover of The Velvet Underground's "I'm Waiting For The Man."  Drum heavy tracks like "Big Eyes" and "Stop This Game" were dutifully handled by Daxx Neilsen, as was the rest of the show, as he anchored the show from behind his kit.  The best part of the show??  The knowledge that I get to experience it once again the next evening! 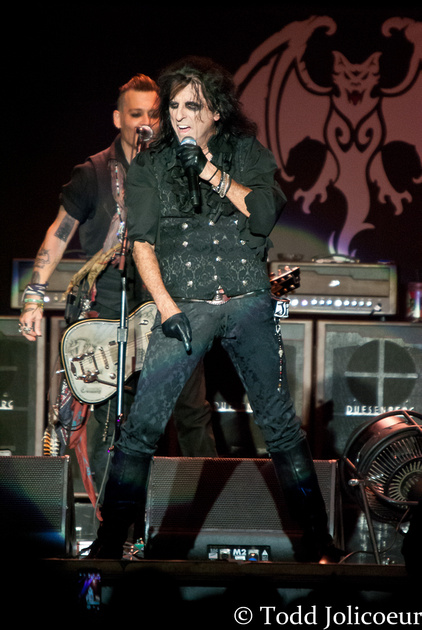 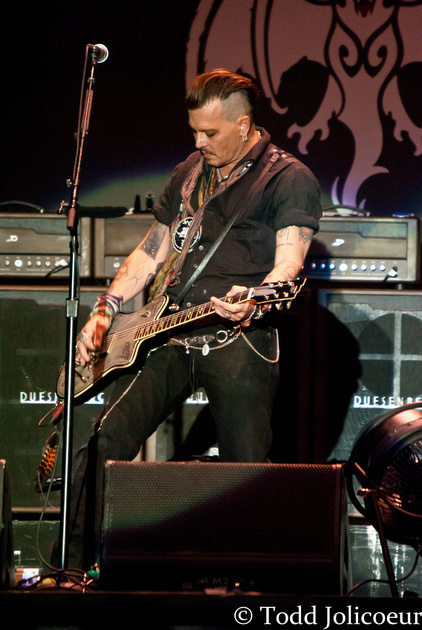 Once Cheap Trick left the stage, the crowd seemed to mill about while the realization of what was to come sank in.  The Hollywood Vampires were in town and the night was going to be electrifying.  While Joe Perry was absent due to a recent health issue, that didn't seem to dampen the excitement of the crowd, which seemed to grow by leaps and bounds as the moment for the band to play drew near.  Once the stage had been converted for the headline portion of the evening, the venue filled with anticipation and a crazy energy that filled the air.  The intro, a portion of "The Last Vampire" - as read by Sir Christopher Lee - set the tone as the band took their spots.  Breaking from the norm for any live show, the band immediately dug into a new cut of the disc, "Raise The Dead."  The band was clicking from the first note and the crowd seemingly couldn't believe their eyes as the duo of Cooper and Depp made there way to their places on stage and gave all they had to give.  Paying homage to Cooper's old drinking club, the band ripped through classic hit after classic hit from Hendrix, The Who, Led Zeppelin, and more.  Recent rockers that passed away were also represented as Bowie's "Rebel Rebel" and "Suffragette City" got the Vampire treatment and Lemmy's Ace Of Spades was treated to the vocal prowess of Cooper and drummer Matt Sorum.  While Perry could not be on stage, Alice Cooper Band / Hollywood Vampire guitarist Tommy Henriksen stepped up and played his ass off on song after song, handling most of the lead guitar work during the show.  In all, three new tracks were played amongst the dozen and a half classics, including the rousing and comical "My Dead Drunk Friends" and Depp's nod to his father, "As Bad As I Am" - which is a killer track.  Keeping time on tracks like "Train Kept A-Rollin'" and Pinball Wizard, Sorum tipped his hat to some of his favorites.  Bass player Robert DeLeo from Stone Temple Pilots jumped into the Vampires lair to handle bass duties for the tour and he provided a heavy handed backline for the tracks played tonight.  The Doors and T. Rex were well represented as the band played through "Five to One / Break On Through (To The Other Side)" and "20th Century Boy" morphing into "Bang A Gong."  One of the coolest moments of the evening was listening to the Vampires roll through their own twisted spin on Led Zeppelin's "Whole Lotta Love."  I was floored as I witnessed Alice Cooper play the harmonica and duet with keyboardist/guitar player Bruce Witkin on this cool rendition.  Johnny Depp seemed to be the focal point of a lot of the audience this evening, and he made the most of it, wandering from left to right, front to back, and everywhere in between on stage, while playing guitar, tossing in some background vocals, and overall seeming to have a fun time on stage.  Tossing in a couple tracks from his own catalog, Alice did what Alice does - entertained, but this time he did it more with short anecdotes and his voice and not with any effects, demonstrating his vocal abilities and his grasp of classic rock and how to respect it.  Who knows if this project will bear more fruit in the form of more recorded material or more touring, so do yourself a favor - grab some friends, some tickets, and enjoy a killer night of rock and roll that will leave you muttering "That was the best concert ever" as I heard several times on my way out of the venue... 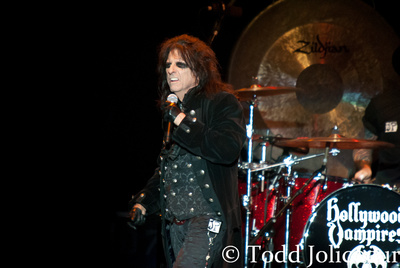 Setlist: Raise The Dead - I Got A Line On You - Rebel Rebel - Suffragette City - Manic Depression - Come Together - Five to One / Break On Through (To The Other Side) - As Bad As I Am - 20th Century Boy - Bang A Gong - 7 And 7 Is - Whole Lotta Love - My Dead Drunk Friends - Ace Of Spades - Pinball Wizard - My Generation - I'm Eighteen - Sweet Emotion - Train Kept A-'Rollin - School's Out / Another Brick In The Wall, Part 2 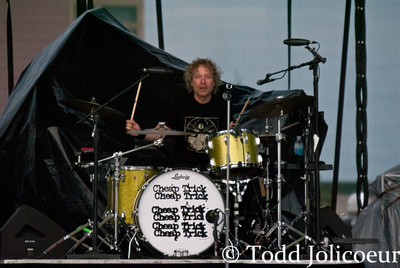 Setlist: Hello There - Big Eyes - California Man - Lookout - On Top Of The World - Ain't That A Shame - Stop This Game - I'm Waiting For The Man - The Flame - I Want You To Want Me - Dream Police - Surrender - Goodnight