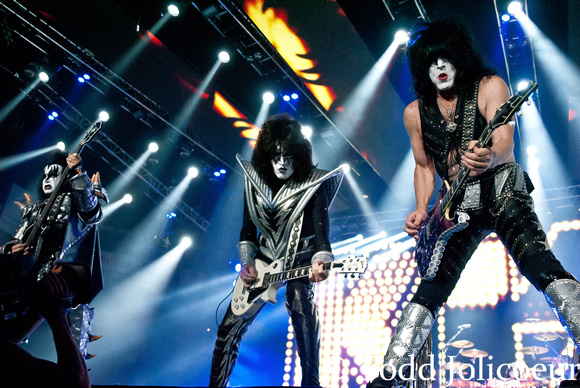 KISS has once again taken to the roads and highways of America, but this year, they took the roads less traveled as they present the Freedom To Rock tour - visiting smaller cities and venues, in order to allow all of their fans to witness another killer KISS show.  Armed with a packed catalog of hits, an  appointment to the Rock and Roll Hall of Fame since the last time they toured, and The Dead Daisies opening up dates for them, they are coming to a town near you with the engine fully revved and the fuel tank full! 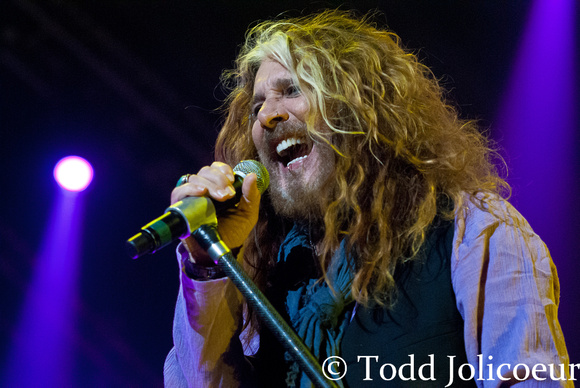 With a third disc released just over a week ago and a lot of lineup changes over the last few years, The Dead Daisies were ready to show Saginaw, MI exactly what they bring to the table - straightforward rock and roll.  Opening with a killer cover of The Alex Harvey Band classic "Midnight Moses," the band came out blazing and ready to rock.  Lead singer John Corabi controlled the flow of energy that left the stage and was returned tenfold by an audience that for the most part didn't know what to expect.   Jumping into another track from the bands sophomore disc Revolucion, the energetic "Mexico," it seemed these guys could not be stopped - especially the riffs and solos that jumped from Doug Aldrich's fingers and through his Gibson's.  The groups debut self-titled disc was represented by the rocking "Lock 'N' Load."  The lone hold out from the original lineup, founding member David Lowy played his guitar with fervor while standing mostly out of the spotlight.  As the band made their way through new tracks, including the title track from the recently released Make Some Noise and "The Last Time I Saw The Sun," the chugging bottom end was anchored mightily by bassist Marco Mendoza and drummer Brian Tichy.  During the course of the show, the band played the covers from the new disc "Fortunate Son" and "Join Together" before closing with a powerful version of "Helter Skelter."  If you didn't know who these guys were going in, you sure as hell knew who they were before they left the stage.

Having seen KISS several times over the last few years, I knew what to expect from the masked marauders.  As the lights went out and the rumble of the sound system filled the venue, almost everyone in attendance knew what came next - "Alright Saginaw - you wanted the best, you got the best - the hottest band in the world, KISS" and with a flash of light and tons of pyro the band and audience were off and running as the opening notes of "Detroit Rock City" tore through the arena.  Next up was one of the oldest tracks played tonight - "Deuce" from the bands February 1974 debut, which was represented by two other songs tonight - "Cold Gin" and showstopper "Black Diamond."  Co-founding member Paul Stanley is the frontman of the band and controls the stage, while his partner of over 40 years Gene Simmons stalks from front to back and side to side with a commanding presence - and some of the best antics on stage, from his blood spewing and flying to the lights above that lead into "God of Thunder" or the fire breathing at the end of one of the heavier tracks of the night, "War Machine."  The Rock and Roll Hall of Fame rockers leaned heaviest on the classic Destroyer with five tracks including "Shout It Out Loud," "Do You Love Me," and one of my favorite tracks that I have never heard live, the anthemic "Flaming Youth."  Kicking off the encore was the coolest rendition of "Beth" from drummer Eric Singer - I won't give away details of the magic moment... you must get yourself a ticket and see this for yourselves.  Lead guitarist Tommy Thayer played every solo flawlessly and all the classic riffs exactly as we remember them, even when he sang and played "Shock Me."  Not to be outdone by anyone on stage, Paul sat on the edge of the stage and played, played with his guitar between his legs or slung over his shoulder like a weapon, and even took to the air to greet fans near the back of the venue during "Love Gun."  Billed as the Freedom To Rock tour, the show was stopped just before the final song of the night, while the band led the crowd in the Pledge of Allegiance, presented local veterans with a donation, and played a spirited rendition of the "Star Spangled Banner."  The bands non-makeup years were represented by 1984's "Lick It Up" complete with an interjected interlude from The Who.  A couple other tracks dotted the musical landscape of the evening before arguably the biggest song in the bands catalog closed the show.  With the familiar drum opening, "Rock And Roll All Nite" came alive with streamers, confetti, riffs, explosions, broken guitars, and levitating band members while the audience seemed to come together with the band for these final glorious moments in Saginaw... 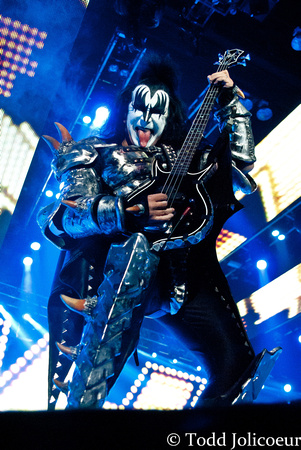 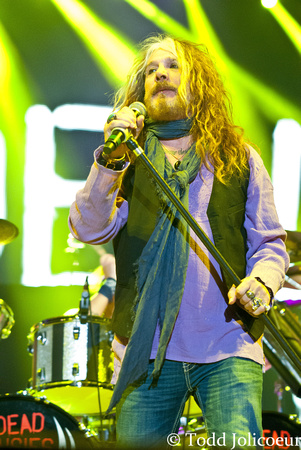