Last week we watched KISS take over The Dow Event Center in Saginaw on their Freedom To Rock tour and it was one of the best shows I had seen in a long time... until they marched into Toledo, OH and unloaded their gear into Huntington Center for another killer show.  This time the Gods of Thunder looked Mother Nature in the face and laughed as she threw a ton of rain and even a tornado in the bands direction.  Never a group to be outdone, they saw her tornado and raised her a rock and roll storm that rained confetti, sprayed pyro and flames, and even included a small lightning storm during the guitar solo! 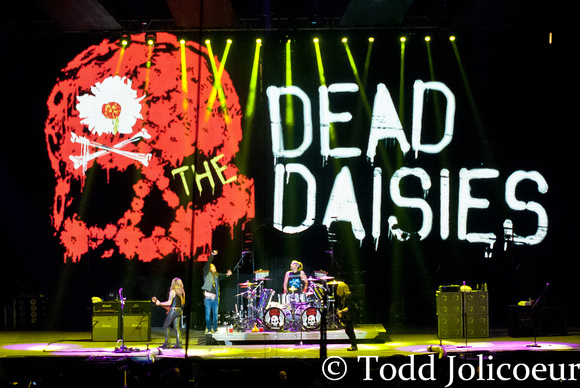 The Dead Daisies are one of my favorite new rock acts out there.  With a pedigree between them that rivals any supergroup, these guys bring a cool vibe wrapped in killer rock music.  With storms looming, the band took to the stage and started whipping an excited crowd into shape with the best version of "Midnight Moses" I have ever heard.  The band was firing on all engines and having a blast doing it.  From there, "Mexico" took over and kept the rock and roll flowing inside the venue with lead singer John Corabi singing his ass off.  Guitarists Doug Aldrich and David Lowy traded licks and riffs while the rhythm section kept time.  "Make Some Noise" from the bands latest disc was next and the band definitely made noise, supported by the pounding bass of Marco Mendoza and heavy handed skin bashing from drummer Brian Tichy.  The band kicked into a rousing version of "Fortunate Son" and was just getting ramped up to take the crowd to the next level when the storms outside kicked into overdrive and brought the show to a halt and the bands set in Toledo to a close. 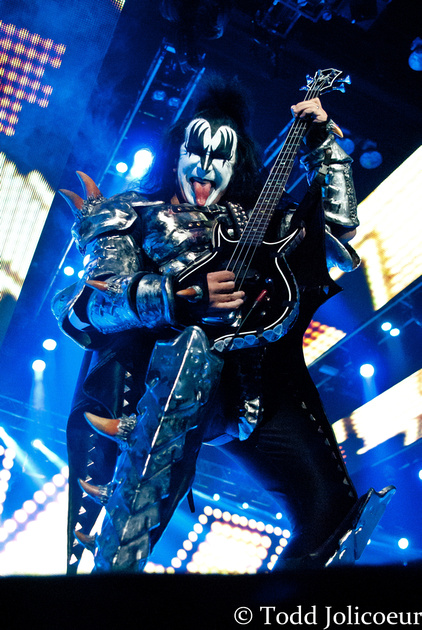 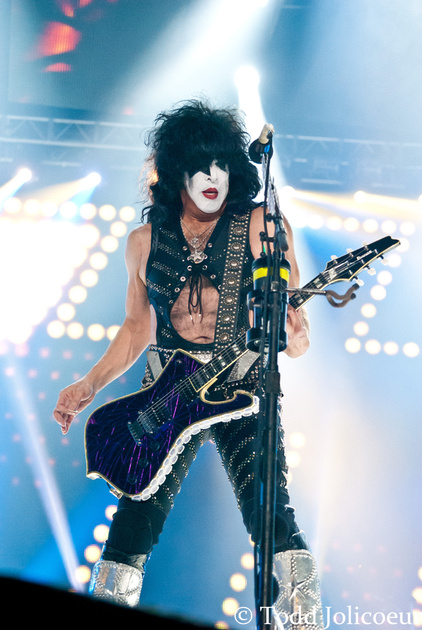 How objective can you be when you see a band for the second time in 10 days?  When it's KISS, you have to be objective - they seem to deliver night after night, city after city.  While setlists and effects don't fluctuate much, the interaction and energy flow from stage to audience and back changes from venue to venue.  After a tornado delay - yes you read that right, a tornado delay - the band assumed their positions behind the curtain that shrouds the stage to open their set.  With the familiar words bellowing through the venues sound system, "... you wanted the best, you got the best - the hottest band in the world, KISS" we were instantly taking a detour to "Detroit Rock City."  Co-founders Paul Stanley and Gene Simmons were revved up and ready to rock, as evidenced by the look on their faces and the fire in their eyes.  After the rousing solos and pyro of the opening track, Simmons took his place behind the mic and helped drive the energy level to another level with "Deuce," which included one of the oldest choreographed moves in the bands repertoire when the Gene, Paul, and guitarist Tommy Thayer come together and sway back and forth while accentuating the beat of the song.  A Destroyer one-two punch comes via "Shout It Out Loud" and "Do You Love Me," with Paul leading the charge and introducing both tracks with some of his banter and crowd engaging antics.  Demon Simmons kicked the show into heavier territory with "I Love It Loud" and a blood-soaked, fly to the ceiling version of "God Of Thunder."  Drummer Eric Singer holds the cadence and tempo perfectly as his   While hearing "Flaming Youth" is a highlight for me, as this is one of my favorite songs from the bands historic catalog, hearing 1998's "Psycho Circus" played note-for-note was just as exciting.  Ringleader Stanley demonstrates night after night why he is considered one of the ultimate frontmen in rock and roll - he controls the flow of the show and gives the audience what they are looking for.  "Shock Me" is a classic, and guitarist Thayer pays homage to the bands legacy as he sings and plays this song exactly as most of us remember it, including his solo at the end.  "Lick It Up sees Stanley and Thayer dueting at the bridge and even throwing in a twist for good measure as they are elevated - literally - during the song.  The heavy and dark "War Machine" sees Simmons punish his bass and light up the dark venue with his fire breathing.  Stanley took over and brought the show to the crowd at the back of the venue as he flew overhead and played "Love Gun" and the intro to "Black Diamond" with a bird’s eye view of the stage from behind the soundboard.  Another surprise of the evening and tour is an acoustic performance of "Beth" that brings Singer from behind his kit and allows him to grab a well-deserved spotlight for a minute or two.  Paying tribute to the military and showcasing their patriotism, the band and audience recited the Pledge of Allegiance and the group performed "Star Spangled Banner."  The is only one way to close a KISS concert, and that is with confetti, streamers, explosions, pyro, guitar smashing, and a little "Rock And Roll All Nite" as the backdrop for the mayhem.  These guys are a well-oiled machine and sound as good, if not better, than on tours in years past.  Get tickets to see this incredible show before the tour ends...​ 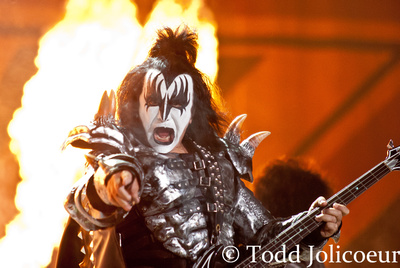 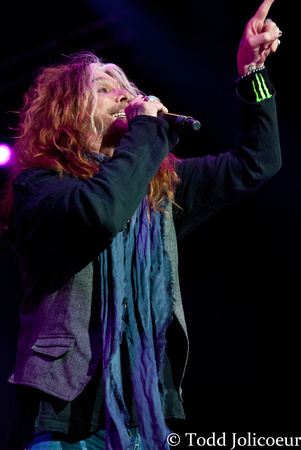