Avenged Sevenfold has been out of the spotlight for a couple year snow, but some pop up dates in  the U.S. on festivals and other shows has refreshed interest in the band among their fringe fans and music fans alike.  When a date was announced at Huntington Center in Toledo, OH, I couldn't wait to witness the live performance that is A7X.  Toss in headliners in their own right Volbeat and you have a killer show of non-stop rock and roll that will grab you from first note, build the intensity and anticipation from set to set and song to song.  As the seats and standing room only GA floor filled up after openers Killswitch Engage and Avatar had a run at the crowd, I waited patiently to photograph and observe both of these great bands... 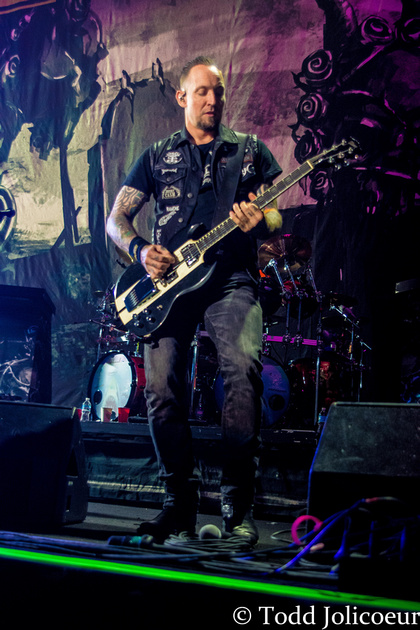 Volbeat hit the stage a little early, but that was more than okay with the fans that came to see the band.  Frontman Michael Poulsen, drummer Jon Larsen, guitarist Rob Caggiano, and new bassist Boye Larsen took control of the evening quickly with the lead track and first single from their recently released Seal The Deal & Let's Boogie when the opening notes of "The Devil's Bleeding Crown" came blaring through the venues sound system.  The night grew in intensity and fun from there as the one-two punch of "Heaven Nor Hell" and "A Warrior's Call" came next in the set and got everybody ramped up and ready for a solid night of rock and roll.  The band paid tribute to Johnny Cash and kept the tempo of the show moving.  Digging into their catalog , the band played songs from and their last few releases while road testing some of the newer tracks including "Slaytan" and "Seal The Deal."  Poulsen controls the flow of their set from behind the mic stepping out occasionally for the guitar solo and spotlight.  Guitarist Caggiano took his leads and made them fun with little guitar antics and solid playing, all the while smiling big.  Drummer Larsen did what he does best - provide the perfect cadence underneath the songs.  New kid ob the block bassist Boye Larsen moved around and kept the bottom end in check with his sticker adorned bass.  If you get the chance to see Volbeat - whether opening or headlining - do yourself a favor and go see one of the most consistent sounding bands on the circuit today. 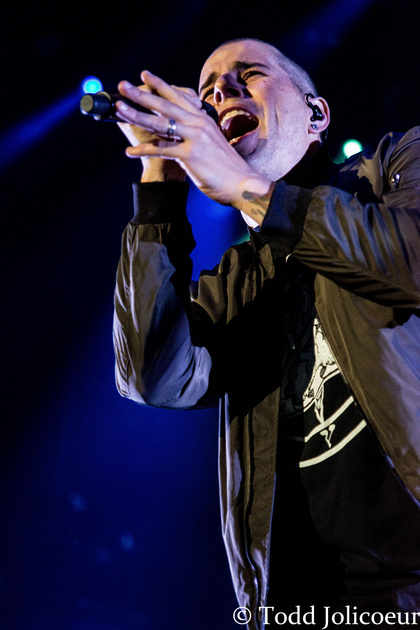 I couldn't wait to see Avenged Sevenfold and hear how the recent absence from the stage had affected their performance.  Once their alloted time struck, the crowd's anticipation rolled back and forth across the venue until the familiar silhouettes of guitarists Gates, Vengeance, bassist Christ, and singer M. Shadows graced the stage.  As the band kicked into the killer "Nightmare" all bets were off; the notes were crisp, the energy peaked, and the audience was an unstoppable force that cheered, clapped, sang, and overall fed off of the energy of the show.  The twin guitar attack of Synyster Gates and Zacky Vengeance was a sight to behold and beautiful sound as they played off each other from song to song, allowing each to grab the spotlight when appropriate.  After a cool live rendition of "Afterlife," the band tore into the first two songs from their most recent release, 2013's Hail To The King with the back to back pairing of "Sheperd Of Fire" and "Hail To The King," with both packing more punch live tonight than they have in their recorded form.  Working backwards through their catalog from here, they featured "Buried Alive" and "God Hates Us" from Nightmare, while "Gunslinger" came off of 2007's self-titled release.  Bassist Johnny Christ and drummer Brooks Wackerman answered the call and gave each track a killer bottom end that kept the songs true to form while adding depth that only a solid live performance gave give.  Digging further back, frontman M. Shadows and the rest of the band tore through older material including cool versions of "To End The Rapture" and "Warmness On the Soul" from 2001's Sounding The Seventh Trumpet.  The band was all over their back catalog paying homage to their roots and fans that have been their from the beginning.  From song to song, Shadows moved from side to side delivering a fun and intense performance that seemed to charge up not only the crowd but the band of brothers behind him.  This was a fun show to see and hear - and these guys sounded tighter and more on fire than they have the last couple times I saw them.  We cna only hope their future plans include new material and a more conclusive tour that brings them to more cities and venues so their fans far and wide can see exactly how on top of their game Avenged Sevenfold is in 2016. 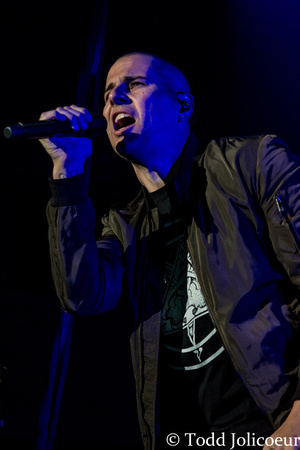 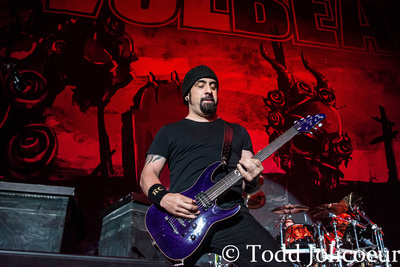