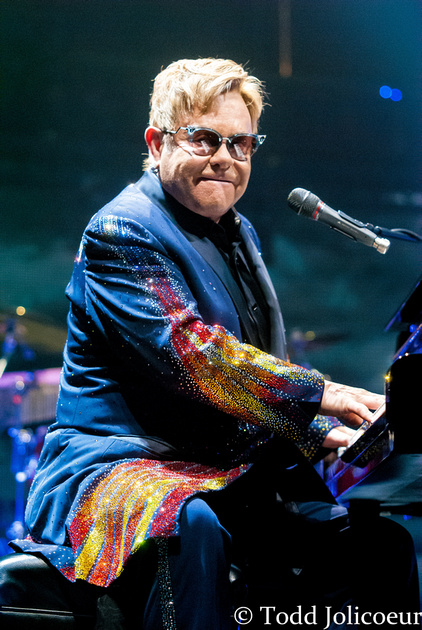 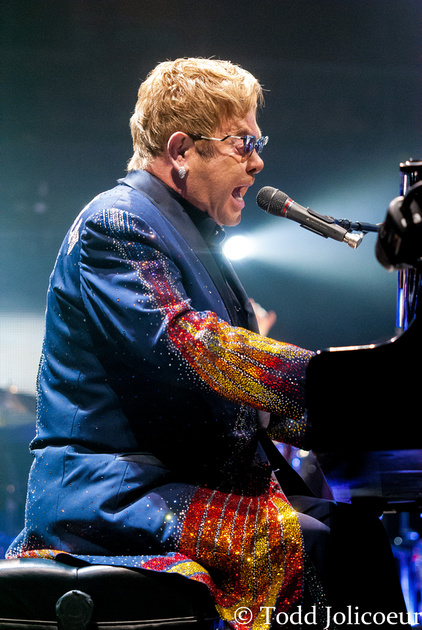 There are legendary songs.  There are legendary performers.  There are LEGENDS.  On a dreary rainy night in Toledo, OH, the capacity crowd that poured into the sold out Huntington Center witnessed all three.  Sir Elton John and his band of merry music makers took over the stage and owned if for close to three hours - playing twenty six songs pulled from an extensive catalog that goes back decades.  Opening with the beautiful mashup of "Funeral For A Friend/Love Lies Bleeding", John and his band took control quickly of the evening and set forth to create a memorable show for all in attendance.  The voice behind the piano was as strong as ever whether crooning the songs we all know and love or road testing new material ("Looking Up" and "A Good Heart") from his latest release Wonderful Crazy Night, which dropped February 5th of this year.  The new material slid right in and fit perfectly alongside the other songs the man would perform over the course of the show.  There were no explosions, no bombastic light shows, and absolutely no filler.  This show was hit after hit - and let's be honest, when you are cranking out songs like "The Bitch Is Back," "Philadelphia Freedom," and "Rocket Man" in the first half of your set - you don't need any tricks or traps to keep your fans engaged.  With huge songs from all of our lives soundtracks peppered throughout the evening, the couple more obscure tracks that dotted tonight's musical landscape were welcome anecdotes to the performance, whether a phenomenal version of The One or a cool retro track like 1973's "Your Sister Can't Twist (But She Can Rock 'n Roll)."  Other personal favorites popped up tonight when Elton ripped through some of his 80's classics like "I Guess That's Why They Call It The Blues" and "I'm Still Standing" from Too Low For Zero which is one of my regular go to discs.  Breaking songs down and turning them into extended tracks not only gave John the opportunity to showcase his piano skills, but also allowed the band to take their spots in the musical spotlight.  Musical director Davey Johnstone played guitar on the tracks, maintaining the original spirit of the songs, while putting his own 'live' stamp on some of them when he would add punch to some of the familiar solos, on electric, acoustic, and double-necked guitars.  Drummer Nigel Olsson anchored the evening and the tempo from behind the drums, as he has done for over 2,000 shows with Elton's band.  Rounding out the rhythm section were John Mahon and Ray Cooper on percussion, drums, and vocals, as well as Matt Bissonette on bass and vocals.  Kim Bullard added depth to the music with additional keyboards.  As the night moved along and faces in the crowd lit up from song to song, reflecting the individual love for the various tracks, the crowd and band seemed to feed off of each other as the set wound down.  When the band tore into "Saturday Night's Alright For Fighting," the venue seemed to explode as air-piano players, air-guitarists, and over 8,000 lead singers joined together to celebrate and enjoy the show they experienced together.  After a very short break, Elton returned to the stage and proceeded to sign autographs for many of his fans up front, even pulling a young lady of 5 or 6 on stage for a photo op.  The man and his band closed the show with the one-two punch of "Candle In The Wind" and "Crocodile Rock."  When all was said and done, fans of all ages sang, clapped, high-fived, and rocked the Huntington Center to help celebrate Elton's career and music... Wonderful Crazy Night indeed!!! 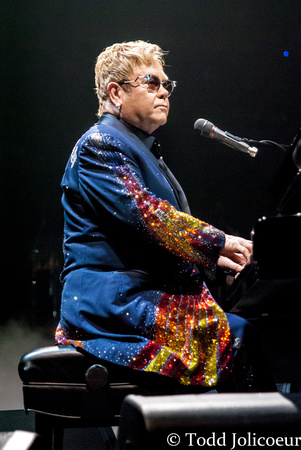 Setlist: Funeral For A Friend/Love Lies Bleeding - The Bitch Is Back - Bennie And The Jets - I Guess That's Why They Call It The Blues - Daniel - Someone Saved My Life Tonight - Looking Up - A Good Heart - Philadelphia Freedom - Rocket Man (I Think It's Going To Be A Long, Long Time) - Tiny Dancer - Levon - Goodbye Yellow Brick Road - Have Mercy On The Criminal - The One - Your Song - Burn Down The Mission - Sad Songs (Say So Much) - Don't Let The Sun Go Down On Me - All The Girls Love Alice - I'm Still Standing - Your Sister Can't Twist (But She Can Rock 'n Roll) - Saturday Night's Alright For Fighting - Candle In The Wind - Crocodile Rock